The Breonna Taylor Case and Questions About Qualified Immunity

Breonna Taylor, an emergency room technician who dreamed of becoming a nurse, buying a house, and starting a family was asleep in bed with her boyfriend, Kenneth Walker, shortly after midnight on March 13 when Louisville police officers executing a search warrant used a battering ram to break down her door.

Loud banging on the door awakened Ms. Taylor and Mr. Walker, who believed someone was trying to break into their home. When several men forced their way inside the apartment, Mr. Walker, 27, fired his licensed firearm in self-defense.

One officer was hit in the leg but is expected to make a full recovery. Mr. Walker was charged with attempted murder of a police officer but the charge was dismissed in May.

Police officers fired back, hitting Ms. Taylor at least five times. In a 911 call just after the shots were fired, Mr. Walker told a dispatcher that “somebody kicked in the door and shot my girlfriend.” He said she coughed and struggled to breathe for at least five minutes after she was shot. Dispatch logs show she received no medical attention for more than 20 minutes.

The police were executing a no-knock warrant, which allows police to forcibly enter people’s homes without warning. Louisville officials have since banned no-knock warrants.

The warrant was issued as part of an investigation into two men believed to be selling drugs from a location more than 10 miles from Ms. Taylor’s home. Police got the warrant to search Ms. Taylor’s home by asserting that one of the men had used her apartment to receive packages.

No drugs were found in the apartment and the police had already located the main suspect in the case before they broke into Ms. Taylor’s home, according to lawyers for Mr. Walker and Ms. Taylor’s family—underscoring that there was no need for police to break down Breonna Taylor’s door in the middle of the night.

There is no body camera footage from that night. The Louisville Metro Police Department fired Brett Hankinson, saying he “displayed an extreme indifference to the value of human life when [he] wantonly and blindly fired” 10 rounds into Ms. Taylor’s home in violation of the department’s policy on use of deadly force. The other officers involved in the case—Jon Mattingly and Myles Cosgrove—have been placed on administrative reassignment. At this point, none of the officers has been charged with a crime. 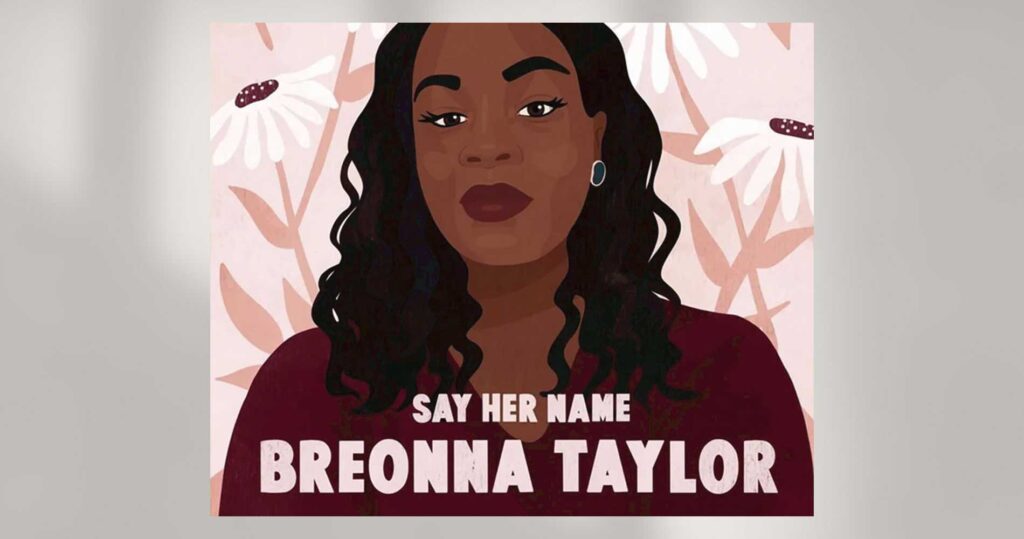 The coronavirus pandemic blunted the impact of initial reports about Breonna Taylor’s killing, but as more people learned about the tragic and needless shooting of a caring and promising young woman, a movement took hold.

On June 5, which would have been Ms. Taylor’s 27th birthday, people used the hashtag #SayHerName to call attention to her case and those of other Black women whose stories have not received as much attention, including Tanisha Anderson and Atatiana Jefferson.

Prosecutors almost certainly have probable cause to arrest the officers, but Kentucky law does not allow a person to harm police officers who enter their home, as long as they announce themselves or the resident reasonably should have known they were police.

In this case, like in many cases, criminal prosecution may be insufficient to provide justice and disincentivize this kind of violent behavior by police officers. The officers who were fired on can claim a self-defense justification for shooting back—even if their behavior was objectively unsafe or likely to provoke a violent response.

The Problem of Qualified Immunity and the Need for Reform

Civil rights lawsuits are intended to go beyond criminal prosecution and can change policies and procedures that protect the public. No one can dispute the wrongfulness of the killing in this case or that the need for accountability is crucial and civil litigation is how many victims receive justice. Yet because of the doctrine of qualified immunity, there are substantial barriers to securing accountability in the civil system.

The doctrine of qualified immunity often acts as an “absolute shield” against accountability for police officers, even when there’s no dispute that they used excessive force.

This legal doctrine limits legal remedies for victims of police violence or misconduct.

The Supreme Court created qualified immunity in the 1960s to limit civilians’ right to sue police officers and other government officials for excessive force and other constitutional violations. The doctrine provides that a police officer can’t even be put on trial for misconduct unless:

Even if a court finds that an officer used excessive force, the officer will be granted immunity from being sued if the facts don’t exactly match an earlier case finding that conduct to be illegal. Because a court can almost always find or make up a factual difference between the case it’s reviewing and an earlier case, the “clearly established law” requirement makes it almost impossible to win a civil rights suit against the police.

The Court’s decisions granting immunity send “an alarming signal to law enforcement officers and the public,” Justice Sonia Sotomayor wrote in a recent dissent. “It tells officers that they can shoot first and think later, and it tells the public that palpably unreasonable conduct will go unpunished.”

A movement to end qualified immunity is gaining steam. Last week, a federal judge compared the doctrine to the segregationist “separate but equal” doctrine that the Court later disavowed, and called on the Court to eliminate qualified immunity. “Let us waste no time in righting this wrong,” he wrote.

Without an identical prior case to establish that the officers who killed Breonna Taylor violated “clearly established” law, the officers could be granted immunity by our judicial system, which would deprive her family of accountability for her horrific killing.