Congressman John Lewis at the National Memorial for Peace and Justice in Montgomery, Alabama, in 2019.

Civil rights champion Rep. John Lewis died Friday at age 80. He had announced in December that he was fighting pancreatic cancer. “Today, American mourns the loss of one of the greatest heroes of American history,” House Speaker Nancy Pelosi said in a statement, calling Mr. Lewis “the Conscience of the Congress.”

John Lewis spoke at the opening ceremony for the Legacy Museum and National Memorial for Peace and Justice in Montgomery, Alabama, in April 2018.

John Lewis was born in 1940 near Troy, Alabama, on a farm where his parents worked as sharecroppers. His parents later purchased 110 acres of their own to farm with the help of John and his nine brothers and sisters, as The New York Times reported. Their house had no plumbing or electricity, and Mr. Lewis worked as a dishwasher and janitor to pay his tuition at American Baptist Theological Seminary in Nashville. There, he studied theology alongside C.T. Vivian, who became a fellow leader in the civil rights struggle and died the same day as Mr. Lewis.

Like Mr. Vivian, Mr. Lewis learned the principles and practices of nonviolent protest from the Rev. James Lawson and immediately put them to use in protests to end segregated lunch counters in Nashville. His first arrest—of at least 40 for demonstrating against segregation and racial inequality—came during the successful Nashville campaign.

Getting arrested had been “a badge of honor,” he said in a 1979 interview. Meeting Rosa Parks and the Rev. Dr. Martin Luther King Jr.—who sent Mr. Lewis a bus ticket to visit Montgomery after the young man wrote to him in 1958—inspired him to “get into trouble, good trouble, necessary trouble.”

He endured far more than his fair share of trouble—repeatedly suffering brutal beatings from segregationists. As a Freedom Rider in 1961, he was beaten unconscious in Montgomery, and he sustained a fractured skull while leading a march for voting rights from Selma in 1965. Media coverage of the police attacking Mr. Lewis and other peaceful protestors on what became known as Bloody Sunday propelled the Voting Rights Act into law.

Mr. Lewis was first elected to Congress in 1986, where he represented Atlanta and relentlessly fought to build Dr. King’s “beloved community”—a world without poverty, racism, or war—for all people. He voted against military spending and opposed the Persian Gulf war, and was arrested in Washington for protesting against apartheid in South Africa and genocide in Darfur.

Generations from now, when parents teach their children what is meant by courage, the story of John Lewis will come to mind—an American who knew that change could not wait for some other person or some other time; whose life is a lesson in the fierce urgency of now.

Mr. Lewis found hope in the response to the police killing of George Floyd. “People now understand what the struggle was all about,” he told “CBS This Morning” in June. “It’s another step down a very, very long road toward freedom, justice for all humankind.”

“It was very moving, very moving to see hundreds of thousands of people from all over America and around the world take to the streets—to speak up, to speak out, to get into what I call ‘good trouble.'”

“This feels and looks so different,” he said of the Black Lives Matter movement. “It is so much more massive and all inclusive.” He added, “There will be no turning back.”

John Lewis embodied the principle that “love is stronger than hate.” His legacy of courage and hope in the face of violence and despair lives on.

“In these days that seem to be so dark, I think the spirit of history is still leading us and guiding us—I believe in that,” he said in a 2016 interview. “Call it what you may, but I believe that somehow, in some way, good is going to prevail. And out of some of the darkest hours, there will be daybreak. There will be light. And we will get there. You have to believe it. You have to believe in your guts that it’s going to be OK.”

Do not get lost in a sea of despair. Be hopeful, be optimistic. Our struggle is not the struggle of a day, a week, a month, or a year, it is the struggle of a lifetime. Never, ever be afraid to make some noise and get in good trouble, necessary trouble. 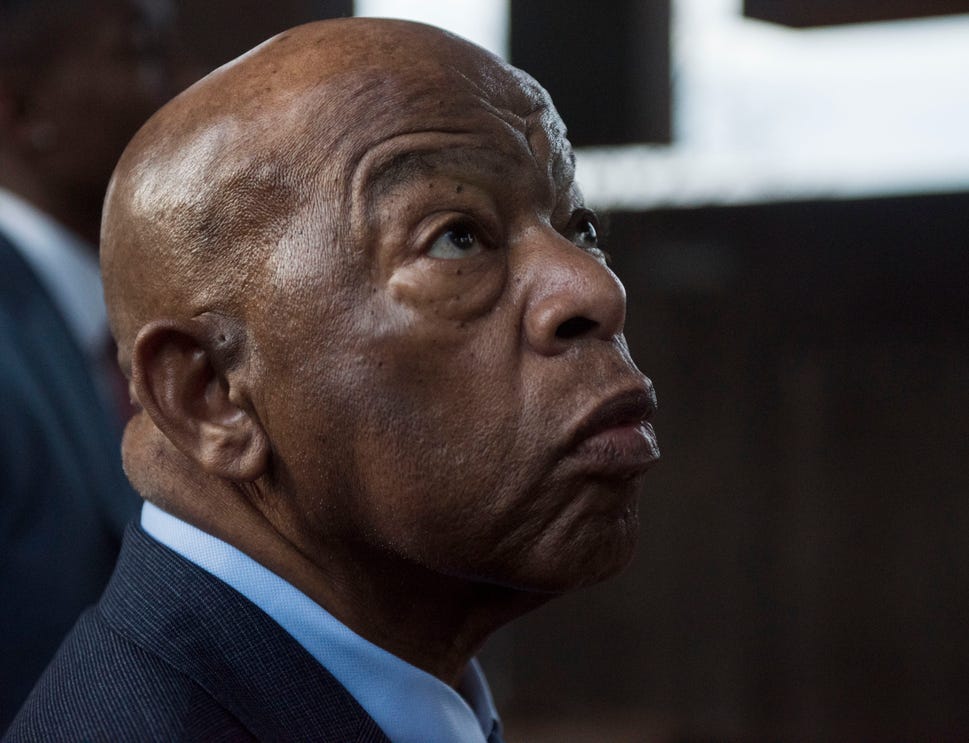