State and local officials and community members dedicated a historical marker in Frankfort, Kentucky, on Saturday that commemorates the racial terror lynchings of Marshall Boston and John Maxey in 1894 and 1909, respectively.

The marker installation is the culmination of three years of work with EJI’s Community Remembrance Project.

In 2019, Focus on Race Relations (FORR), a local racial justice organization that formed in response to the tragic violence in Charlottesville two years ago, partnered with EJI to organize a community soil collection in Frankfurt. And this summer, a racial justice essay contest for local high school students was a featured part of Frankfurt’s Juneteenth celebration.

EJI joined state and local officials and community members for a soil collection service to commemorate the lynchings of Marshall Boston and John Maxey in Frankfort, Kentucky.

“Today, I think we are trying to step one step closer to justice,” Mr. Beshear said. “I admit when you’re trying to do that, it can be both good and be tough. Tough in the sense that we have to look back today on one of the ugliest chapters in our history. And we have to look at it straight without blinking and without turning away.

“It’s a good day when you look around and see how many people have come together, from this community and from outside of it, to say ‘We will not hide from history. We will ensure our children know our history.’”

“Because the only way to get it right and to become that more perfect union is to admit and recognize when you’ve gotten it wrong.”

Faith leaders led prayers and songs and shared local history during the ceremony, which concluded with Mayor Layne Wilkerson and Judge-Executive Huston Wells issuing apologies to the families of Mr. Boston and Mr. Maxey.

Mr. Powe told the State Journal that a search for descendants of the two men was ongoing. At the ceremony, the families were represented by reserved seats in the front row.

“Looking back, while we cannot change the past, we can ensure that events that we’re commemorating today don’t happen again,” the mayor said. “Here in Frankfort we do believe that every person is entitled to equal treatment, respect for their constitutional rights, and due process of law.”

“Today, as the mayor, allow me to acknowledge the facts that have been presented, that justice was not served those many years ago and offer my apology on behalf of the City of Frankfort and any official who was any way involved in the lynching of Marshall Boston and John Maxey, and for the subsequent failure to prosecute those involved to the fullest extent of the law.”

After the ceremony, participants attended the unveiling of the historical marker, located on the north side of the Singing Bridge in downtown Frankfurt.

“This keeps everyone’s history alive,” EJI’s Ariel Harris said at the dedication, “to make sure we don’t forget that history and that we make a difference.” 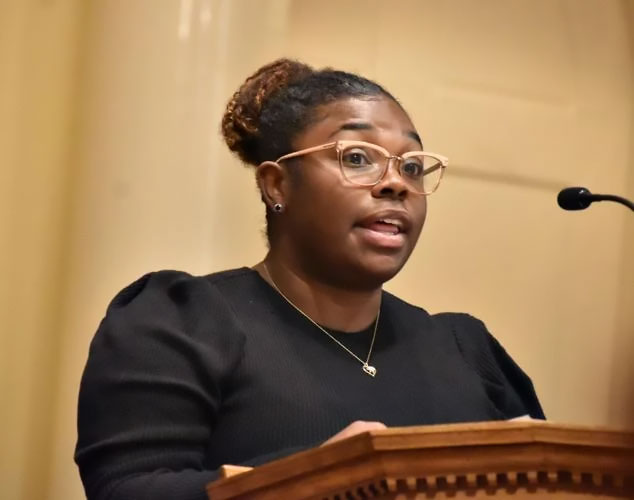 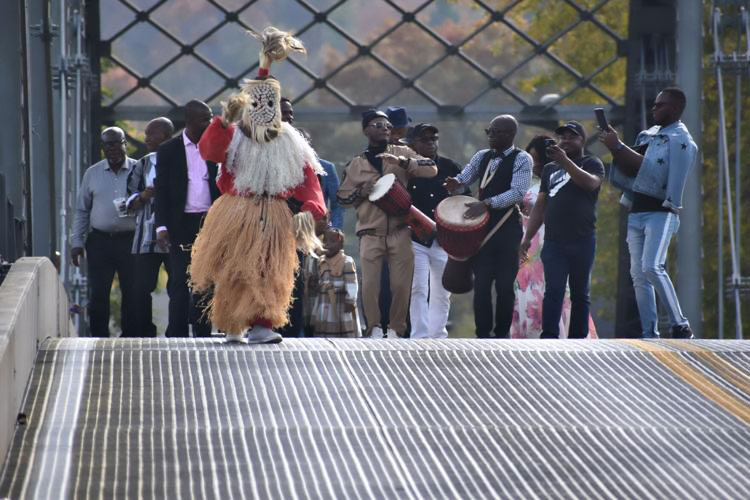 Performers from the Unity of African Communities Living in America walk across the Singing Bridge as part of the marker unveiling ceremony honoring Marshall Boston and John Maxey. 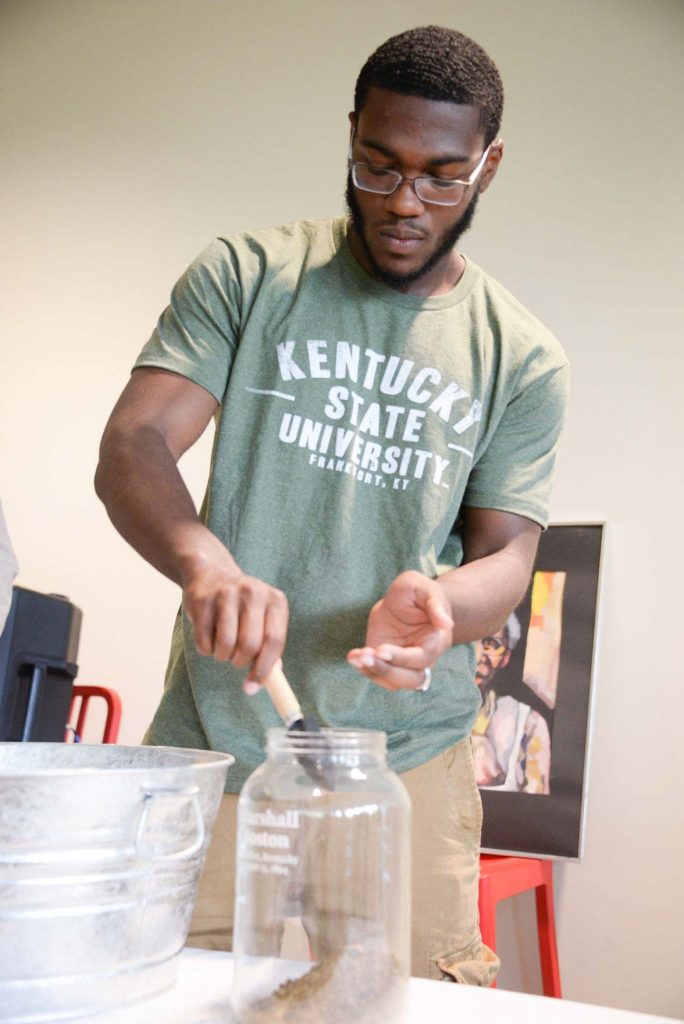 Aaron Harris, a Kentucky State University student from Cincinnati, Ohio, adds soil to a jar commemorating Marshall Boston during a ceremony on August 18, 2019. 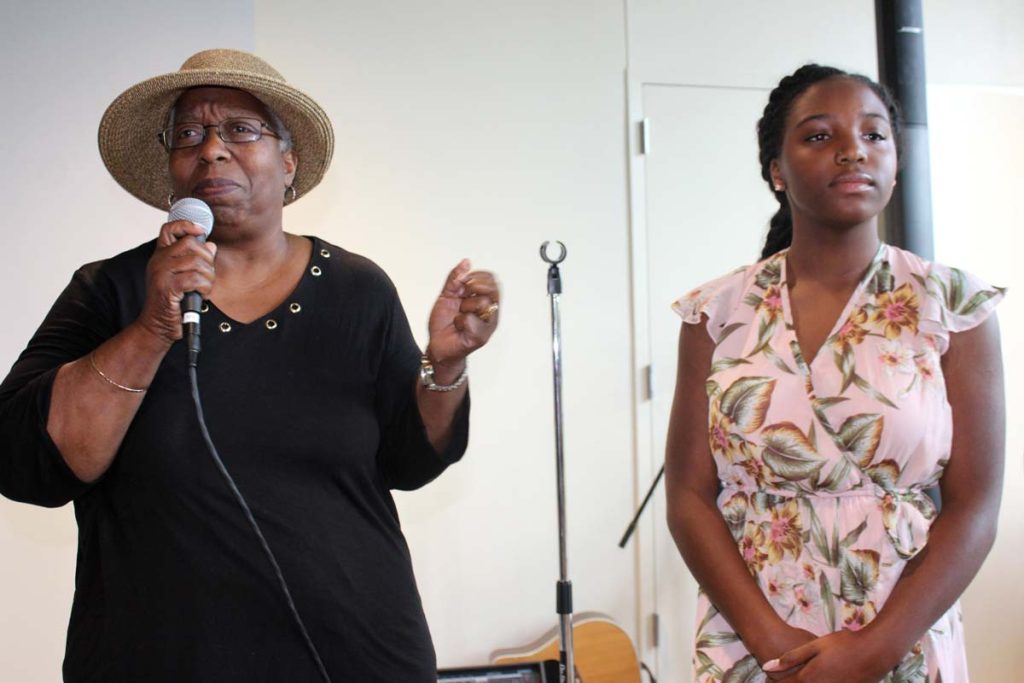 Representatives from the Kentucky State University Concert Choir at the soil collection ceremony on August 18, 2019.

Performers from the Unity of African Communities Living in America walk across the Singing Bridge as part of the marker unveiling ceremony honoring Marshall Boston and John Maxey.

Aaron Harris, a Kentucky State University student from Cincinnati, Ohio, adds soil to a jar commemorating Marshall Boston during a ceremony on August 18, 2019.

Representatives from the Kentucky State University Concert Choir at the soil collection ceremony on August 18, 2019.

The Lynchings of Marshall Boston and John Maxey

The two men remembered at the ceremony were among 169 African American victims of racial terror lynching that EJI has identified in Kentucky between 1880 and 1950.

Marshall Boston was hanged on an iron bridge over the Kentucky River on August 15, 1894.

According to news reports, Mr. Boston was accused of raping a white woman on August 14. The local sheriff informally deputized a group of 30 men who apprehended Mr. Boston and presented him to the alleged victim. When she identified him as her assailant, he was arrested and jailed.

In the strictly maintained racial caste system of this era, white lives and property held heightened value, while the lives of Black people held little or none. White womanhood, in particular, was often portrayed as being threatened by Black men, who were regularly stereotyped as violent, sexually aggressive, and desirous of contact with white women.

Almost 25% of documented lynchings were sparked by charges of sexual assault, at a time when the mere accusation of sexual impropriety aroused violent mobs and ended in lynching. Lynching, as a statement of racial terror and white supremacy, was largely reserved for Black suspects, who were burdened by a presumption of guilt due to racial hostility. White people accused of similar crimes were much more likely to be prosecuted through the legal system. Race, rather than the alleged offense, predominantly contributed to lynching victims’ fates.

At midnight, a white mob broke into the jail and abducted Mr. Boston, whose cell was reportedly under heavy guard. Armed law enforcement officers responsible for protecting the people in their custody almost never used force to resist white lynch mobs. In some cases, police were found to be complicit or active participants in lynchings.

Newspapers reported that, after the white mob abducted and beat Mr. Boston, he confessed. Black people accused of crimes during this era were often beaten and tortured to extract a confession, and these inherently unreliable statements were then reported as a justification for the brutal lynchings that followed, even in the absence of any evidence or investigation, much less a trial. The local press called Mr. Boston a “Black brute” and a “fiend,” drawing upon dangerous racial caricatures that heightened white people’s fears that Black men were intent on the sexual conquest of white women.

The white mob hanged Mr. Boston on the beam of the iron bridge that divides North and South Frankfort and fired hundreds of bullets into his body. A grand jury convened to investigate the lynching, but as was typical, no witnesses stepped forward and no indictment was returned.

John Maxey was hanged on June 3, 1909, from the girders of the St. Clair Street bridge in Frankfort.

Mr. Maxey was accused of shooting a white “circus man,” newspapers reported, and was arrested. On June 3, a white mob broke into the jail and abducted him.

During this era of racial terror, Black people accused of crimes were burdened by a presumption of guilt, even before investigation or trial, and white peoples’ allegations against Black people were rarely subject to serious scrutiny. In many cases, the mere suggestion of Black-on-white violence, in particular, not only provoked hostile suspicion against Black residents and the Black community, but also often resulted in mob violence and lynching before the judicial system could or would act.

The mob marched Mr. Maxey to the St. Clair Street bridge, where on their first attempt to hang him, the rope broke. They forced Mr. Maxey to climb up the girders and then pushed him to his death, in front of at least 200 people. The mob then fired multiple rounds into his corpse.

Of the hundreds of Black people lynched under the accusation of assault and other alleged crimes, nearly everyone was brutally killed without being legally convicted of any offense. Lynch mobs regularly displayed complete disregard for the legal system, even abducting Black people from courts, jails, and out of police custody. Law enforcement officials often failed to intervene and sometimes participated in mob violence. No one who participated in Mr. Maxey’s lynching faced prosecution.

As part of its effort to help towns, cities, and states confront and recover from tragic histories of racial violence and terrorism, EJI is joining with communities to install historical markers in communities where the history of lynching is documented. EJI believes that by reckoning with the truth of the racial violence that has shaped our communities, community members can begin a necessary conversation that advances healing and reconciliation.

Thousands of Black people were the victims of lynching and racial violence in the United States between 1877 and 1950. The lynching of African Americans during this era was a form of racial terrorism intended to intimidate Black people and enforce racial hierarchy and segregation.

Lynching was most prevalent in the South, including Alabama, Arkansas, Florida, Georgia, Kentucky, Louisiana, Mississippi, North Carolina, South Carolina, Tennessee, Texas, and Virginia. After the Civil War, violent resistance to equal rights for African Americans and an ideology of white supremacy led to violent abuse of racial minorities and decades of political, social, and economic exploitation.

In an expanded edition of Lynching in America, EJI also documented racial terrorism beyond Southern borders, detailing more than 300 lynchings of Black people in eight states with high lynching rates in the Midwest and the Upper South, including Oklahoma, Missouri, Illinois, West Virginia, Maryland, Kansas, Indiana, and Ohio.