On April 2, 2022, the Lafayette County Remembrance Project in partnership with EJI dedicated a historical marker memorializing seven documented victims of racial terror lynching in Lafayette County, Mississippi. The marker was initially unveiled in September 2021, but the group decided to take precautions due to the Covid-19 pandemic and postponed the community-wide event until April 2022.

The marker stands on the lawn of the Lafayette County Courthouse in Oxford. It is the first marker documenting racial terror violence against Black people to be erected at a courthouse in Mississippi.

At least 200 people gathered in front of Oxford City Hall for the dedication ceremony on April 2, including descendants of Will Steen, Lawson Patton, and Elwood Higginbottom. Faith leaders and representatives from the Oxford Board of Aldermen, the Alluvial Collective, and the Civil Rights and Restorative Justice Project  attended the live-streamed ceremony.

Dr. Donald Cole, a member of the Lafayette County Remembrance Project, served as the master of ceremonies. There were performances by the University of Mississippi Gospel Choir, local musicians, Effie Burt and Lenny Kaye, and the descendants of Elwood Higginbottom. Members of the community remembrance project, including Alonzo Hilliard and Randon Hill, offered remarks about the coalition and the importance of the marker.

April Grayson, a member of the Alluvial Collective and the Lafayette County Remembrance Project, introduced the descendants of the victims during the ceremony and handed each family member a rose as they walked in a processional to the historical marker at the end of the ceremony.

Following the marker dedication, the Lafayette County Remembrance Project held a small ceremony at the Old Armory Pavilion to dedicate a bench in memory of Elwood Higginbottom’s son, the Rev. E.W. Higginbottom Sr., who passed away in April 2020. Only four years old when his father was lynched, he was instrumental in the coalition’s early efforts to memorialize his father by erecting a marker on the corner of North Lamar Boulevard and Molly Barr Road about the 1935 lynching in Oxford.

Researchers have identified seven African American men who were lynched by white mobs in Lafayette County between 1885 and 1935 after being accused of “inappropriate” interactions with white women or other crimes.

Allegations against Black people were rarely subjected to serious scrutiny during this era. Instead, mobs frequently pulled lynching victims from jails, often facing little to no resistance from law enforcement officers who were legally required to protect people in their custody.

On July 12, 1885, a white mob kidnapped Harris Tunstal from jail and hanged him behind the Methodist Episcopal Church near the Oxford square. On November 13, 1890, a mob interrupted Will McGregory’s trial in front of a magistrate judge and shot him to death before hanging his body near Orwood.

A mob hanged an unknown Black man on September 2, 1891, after kidnapping him from the Oxford jail. Less than two years later, on July 30, 1893, a mob lynched Will Steen near Paris because of rumors that he was having an affair with a white woman.

On June 19, 1895, a white mob shot William Chandler and hanged him from a telegraph pole across from the train depot in Abbeville. On September 8, 1908, Lawson Patton, a jail trustee accused of the murder of a white woman, was fatally shot in his cell and hanged on the grounds of the Lafayette County Courthouse.

On September 17, 1935, Elwood Higginbottom was on trial after being accused of the murder of a white farmer when he was dragged from jail and hanged by a mob of white men about a mile and a half north of the Oxford square.

No one was ever held accountable for these lynchings.

In the spring of 2017, April Grayson and the Alluvial Collective (formerly known as the William Winter Institute) launched a multiyear process to invite local community members to come together to focus on dialogue and equity building around issues of race and systems of oppression. The group invited speakers from local and national organizations on a host of issues including the history of lynching in North Mississippi.

In November 2017, EJI staff members shared information about EJI’s effort to document and memorialize victims of racial terror lynching through the Community Remembrance Project. Local community members and the descendants of Elwood Higginbottom participated in a memorial and soil collection ceremony the following March, and a few weeks later, the family and community members attended the April 2018 opening of EJI’s Legacy Museum and the National Memorial for Peace and Justice.

After their visit to Montgomery, the group continued organizing and began to work towards multiple community remembrance projects, including an essay contest for students in fall 2018 and the dedication of a historical marker for Elwood Higginbottom. In September 2021, members of the Lafayette Community Remembrance Project held a small gathering to celebrate the installation of a historical marker memorializing the county’s seven documented victims of racial terror lynching on the courthouse lawn.

The Lafayette Community Remembrance Project is supported by individuals and organizations from throughout the community and it continues to grow. The project has hosted numerous community events throughout the past few years, including multiple trips to Montgomery and community soil collection events for the other documented victims in the county. 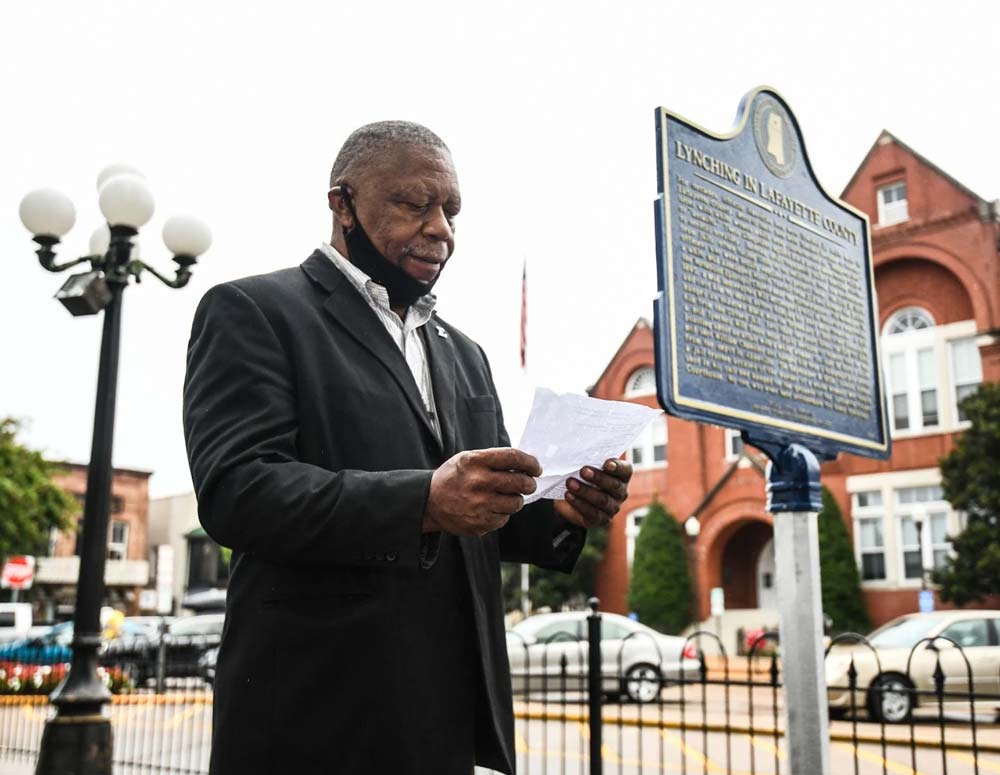 Alonzo Hilliard, a member of the Lafayette County Remembrance Project, reads the names victims of racial terror lynchings in Oxford during a marker dedication ceremony in September 2021. 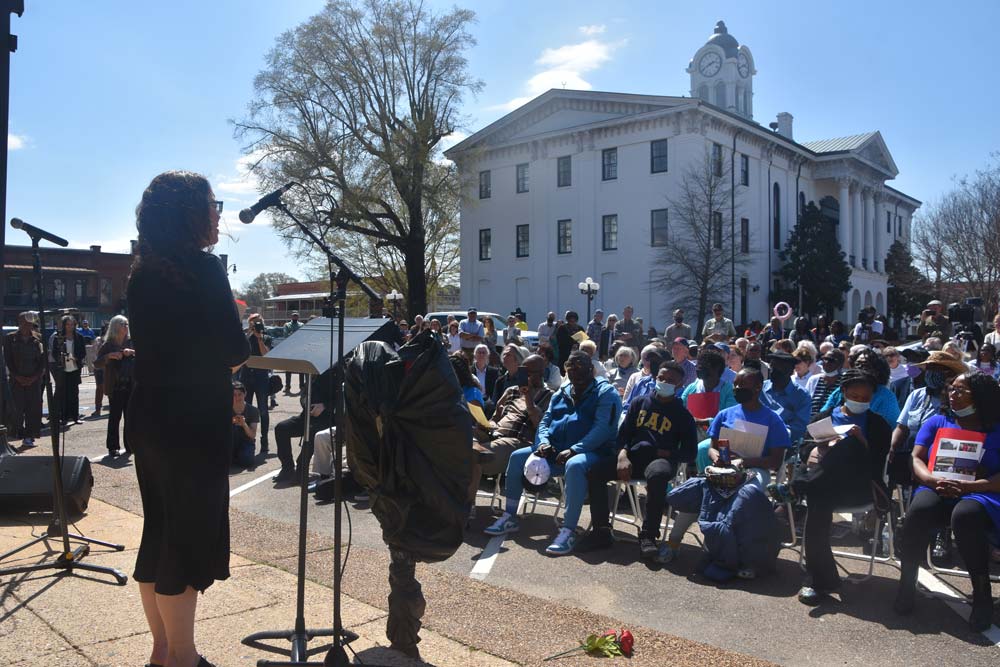 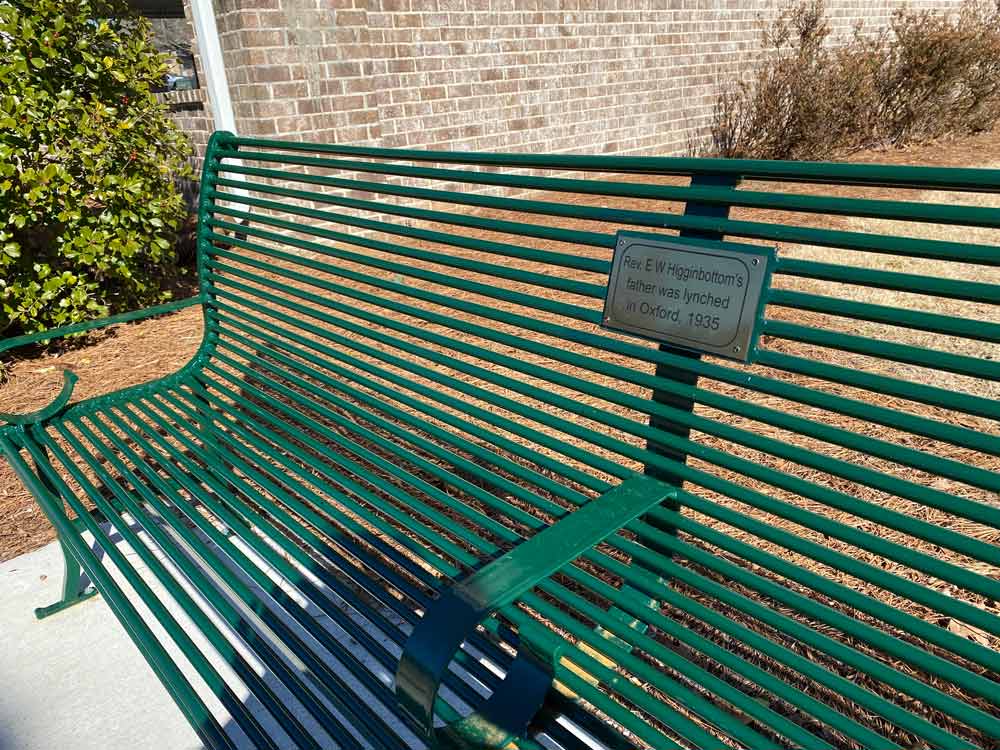 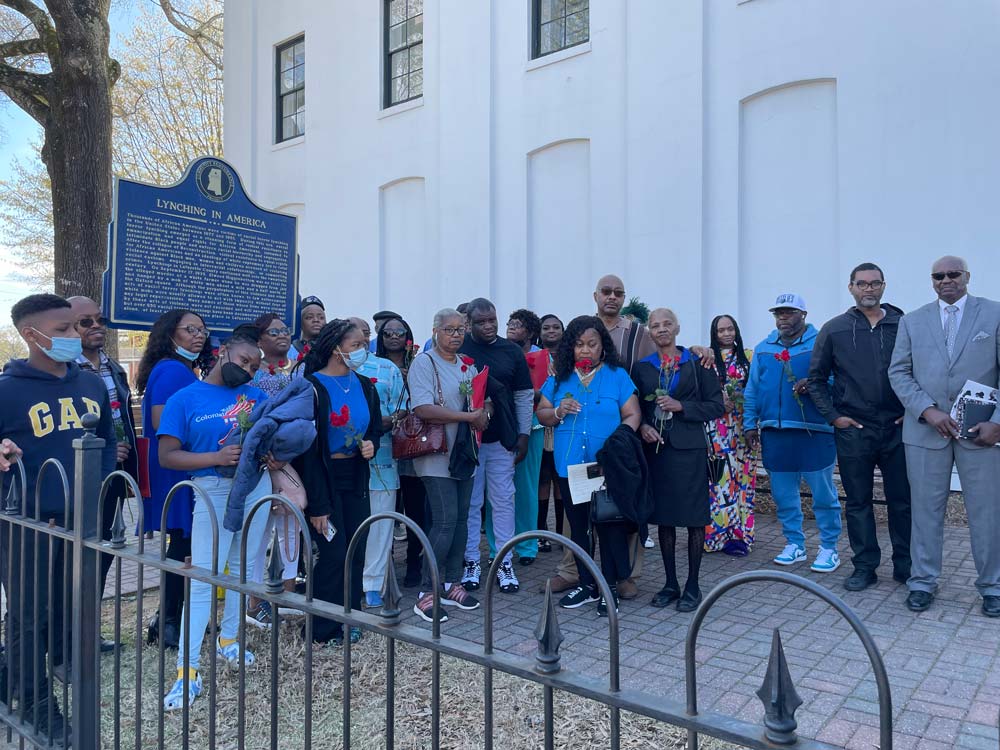 Alonzo Hilliard, a member of the Lafayette County Remembrance Project, reads the names victims of racial terror lynchings in Oxford during a marker dedication ceremony in September 2021.

Based on research for Lynching in America and Reconstruction in America, EJI has documented nearly 6,500 racial terror lynchings in America between 1865 and 1950.

After slavery ended, many white people remained committed to racial hierarchy and used lethal violence and terror against Black communities to maintain a racial, economic, and social order that oppressed and marginalized Black people. Lynching became the most public and notorious form of racial terrorism and created a legacy of injustice that can still be felt today.

Of the hundreds of Black people lynched under accusation of alleged crimes, nearly everyone was brutally killed without being legally convicted of any offense. Many African Americans were lynched for perceived violations of social customs, engaging in interracial relationships, or being accused of crimes even when there was no evidence tying the accused to any offense.

White mobs regularly displayed complete disregard for the legal system, seizing their victims from jails, prisons, courtrooms, or from police custody without fear of legal repercussions for the lynchings that followed. In this environment of official indifference, racial terror remained systematic, far reaching, and devastating to the Black community for generations.

As part of our effort to help towns, cities, and states confront and recover from tragic histories of racial violence and terrorism, EJI is joining with communities to install historical markers in communities where the history of lynching is documented. This is the second narrative historical marker erected in partnership with EJI in Oxford, and is among dozens of narrative markers sponsored by EJI to date.