This week, Montgomery police arrested and charged four people with removing a statue of Robert E. Lee from atop a pedestal at the entrance of the local high school bearing his name. For 60 years, the Confederate General’s likeness had held its prominent place on the once all-white public school’s campus—even though Lee commanded forces in a war to maintain the enslavement of Black people, and even though more than 8 in 10 of the school’s students are now Black. After years of unsuccessful calls to remove or relocate the statue, the pedestal today stands empty. Officials charged with charting the path forward from here should know that their decision will be no more neutral than the decision to place the statue in 1960.

The history of Robert E. Lee High School, and its relationship to this statue, is rooted in the massive resistance campaign that white people in Alabama and throughout the South waged to maintain school segregation. On May 17, 1954, in Brown v. Board of Education of Topeka, the U.S. Supreme Court unanimously invalidated racial segregation in public education, reasoning that segregated public schools were “inherently unequal” and violated the Equal Protection Clause of the Fourteenth Amendment. By overturning the nearly 60-year-old precedent of “separate but equal,” Brown threatened to dislodge a cornerstone of the Southern racial caste system.

Opposition to Brown sparked a mass movement, and white Americans implemented a strategy of “massive resistance” that used tactics like legal delay, violent intimidation, and bold defiance. In fall 1955, one year after Brown was decided and just months after the Court ordered segregated schools to desegregate “with all deliberate speed,” Robert E. Lee High School opened in Montgomery as a brand new, state-of-the-art campus—for white students only. An August 1955 Montgomery Advertiser story lauded the $1.25 million building and $125,000 of equipment set to serve nearly 800 pupils in the first year. Reporting the inaugural students’ excitement alongside several photos of smiling white teens, the article noted, “It’s not every teenager who gets to christen a new school. In fact, its been about 26 years since Montgomery had a new white high school.” 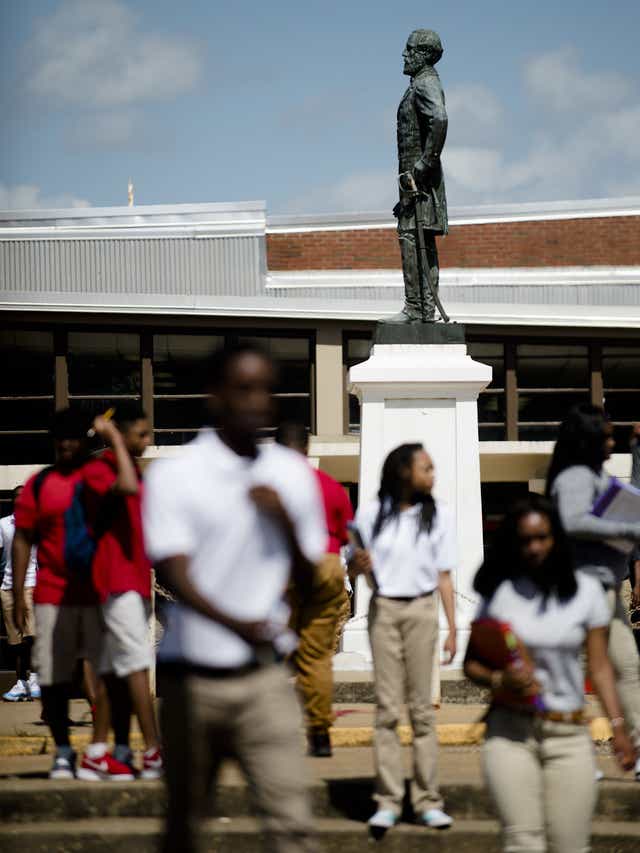 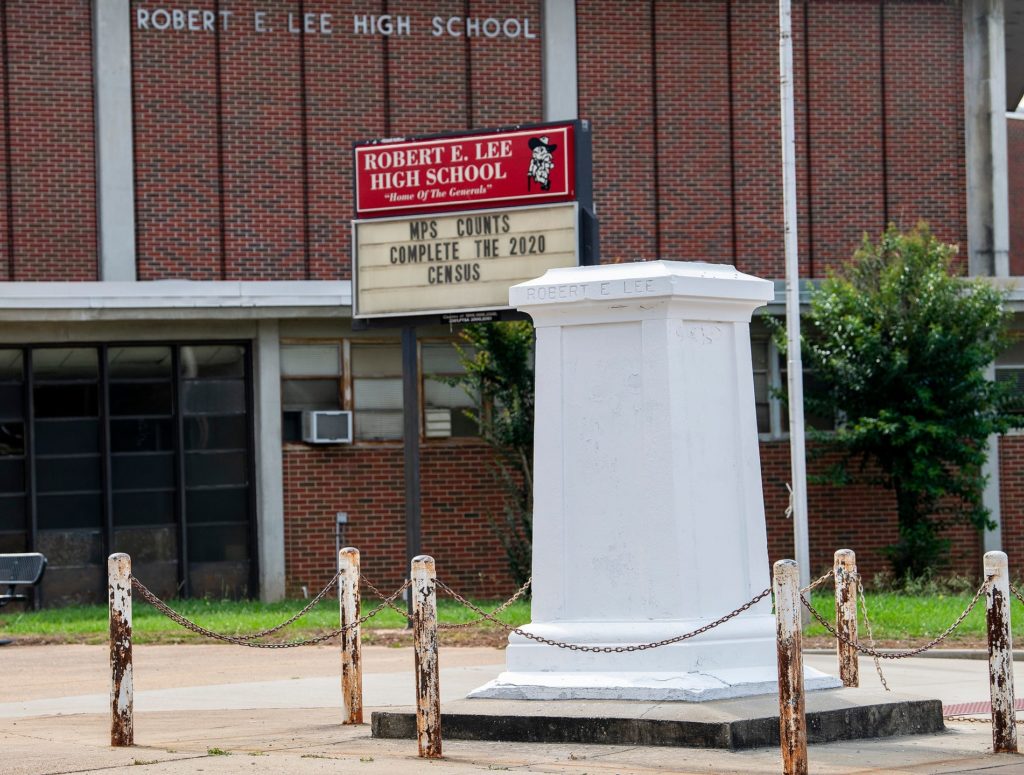 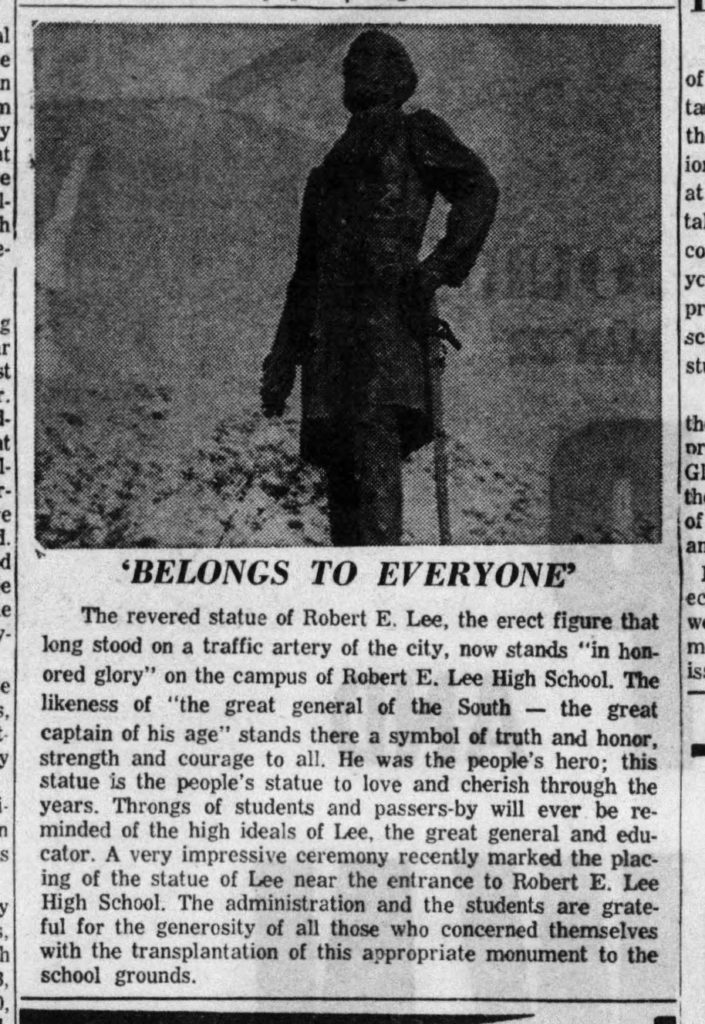 Though the Advertiser’s report made no reference to Montgomery’s Black students, the Brown decision, or the desegregation fight gearing up throughout the South, Alabama was in the thick of it. State lawmakers mounted legal resistance through a “pupil placement law” that assigned students to schools based on race without explicitly mandating racial segregation. Alabama officials, who admitted the law was intended to maintain segregation, were “jubilant” in 1958 when it was upheld as constitutional. Senator Russell Long of Louisiana called the decision “the most encouraging thing for the South in some time,” as it “shows a willingness of the court to settle for token integration.”

The massive resistance movement also rejuvenated a familiar Southern white identity, as Confederate iconography came to symbolize a renewed fight for “states’ rights”—once a fight for the right to own Black people, and now a fight to maintain a racial caste system based in white supremacy. The Confederate battle flag was a staple at white segregationist protests and rallies, waved proudly by white mobs gathered to taunt African American students integrating schools and staging lunch-counter sit-ins, or Black community members and their allies braving police violence to march from Selma to Montgomery in pursuit of voting rights.

Teenage boys wave Confederate flags during a protest against school integration in Alabama, 1963.

Six years after Brown, Alabama remained one of six Southern states that still boasted complete racial segregation in its public schools. “Several integration attempts by Negro students have been rejected, and recent polls have disclosed strong sentiment to close schools rather than integrate,” the Associated Press reported in January 1960. That May, in the midst of Alabama’s continued defiance, Montgomery officials moved a statue of Robert E. Lee, first erected in the city in 1908, to a new home at the shining school nearby. “A very impressive ceremony recently marked the placing of the statue of Lee near the entrance to Robert E. Lee High School,” the Advertiser reported.

The revered statue of Robert E. Lee, the erect figure that long stood on a traffic artery of the city, now stands “in honored glory” on the campus of Robert E. Lee High School. The likeness of “the great general of the South—the great captain of his age” stands there a symbol of truth and honor, strength and courage to all. He was the people’s hero; this statue is the people’s statue to love and cherish through the years. Throngs of students and passers-by will ever be reminded of the high ideals of Lee, the great general and educator.

The Advertiser’s glowing report was printed under the headline, “Belongs to Everyone,” but of course that was no more true of this statue honoring a man who called enslavement “necessary for [Black people’s] instruction as a race” than it was true of the still-segregated Lee High campus. It wasn’t until 1964, more than 10 years after Brown, that three Black students were permitted to enroll. Black students now form a large majority of the student body, and have repeatedly organized efforts to scrub the school of its Confederate ties:  a student-led campaign to rename the high school was rejected in 2018, and a new petition aimed at keeping the statue down gained 2500 alumni signatures in less than five hours.

Between 1950 and 1975, at least 150 Confederate monuments and memorials were dedicated throughout the U.S. Just as courageous activists were challenging this country to live up to its greatest ideals of equality and freedom, white Americans opposed to that movement embraced Confederate figures like Lee and Jefferson Davis, and the identity of racist Southern defiance, to cling to a dying status quo. As Montgomery officials consider the future of the Lee statue, and the people accused of its removal, they must consider this history, the meaning that this symbol held when first placed, and the meaning their choices have the power to make now.