On June 21, descendants of Mr. Garnet and Mr. Corbin, Oxford city officials, Miami University leaders and educators, and a diverse group of guests celebrated the installation of the marker in the Martin Luther King Jr. Park in downtown Oxford. The marker dedication also served as the inaugural event for the 10th Annual National Civil Rights Conference being hosted at Miami University.

During the 19th century, white mobs in Oxford lynched at least two Black men after kidnapping them from the old Town Hall Jail that stood near what is now Martin Luther King Jr. Park.

In September 1877, a white mob stormed the jail to lynch a Black man named Simeon Garnet. Without serious investigation, Mr. Garnet had been accused of assaulting a white woman. A mob led by the woman’s husband broke into the jail on September 2 and shot Mr. Garnet, who managed to survive. Upon learning that Mr. Garnet was alive, the mob attacked the jail again on September 3, shot Mr. Garnet at close range, and dragged him outside the jail, where he was left to die.

On January 14, 1892, a white mob abducted Henry Corbin from the jail to lynch him. Mr. Corbin’s employer, a white woman, had been found dead in her home on January 5. A mob quickly formed when the woman’s daughter accused Mr. Corbin, a young Black man, of the killing. Mr. Corbin’s family maintained that the accusation was false and that the daughter had implicated him to hide her own involvement in the crime. Mr. Corbin was captured after being wounded and was brought to the jail, but the mob seized him from his cell, hanged him from a tree, and shot him over 400 times.

Local officers failed to prevent these lynchings, which terrorized Oxford’s Black community. In the end, no mob participants were held accountable for the lynchings of Simeon Garnet and Henry Corbin.

In 2018, Anthony James and Valerie Carmichael, leading educators at Miami University, developed a course on Truth and Reconciliation that examined how understanding history can inform and shape our responses to the world today. As part of the course, students visited EJI’s Legacy Museum and the National Memorial for Peace and Justice in spring 2019. The experience helped inspire what became the Truth and Justice Project Coalition of Butler County.

Since its inception, the coalition has collected soil in memory of Simeon Garnet and Henry Corbin, hosted public education events, and has continued to engage students and the community about the local and national legacy of racial terror in America. Family descendants of Simeon Garnet and Henry Corbin have been vital to recognizing and remembering the local history of racial injustice and terror they faced. They actively participated in the recent historical marker dedication by unveiling the new historical marker in downtown Oxford. 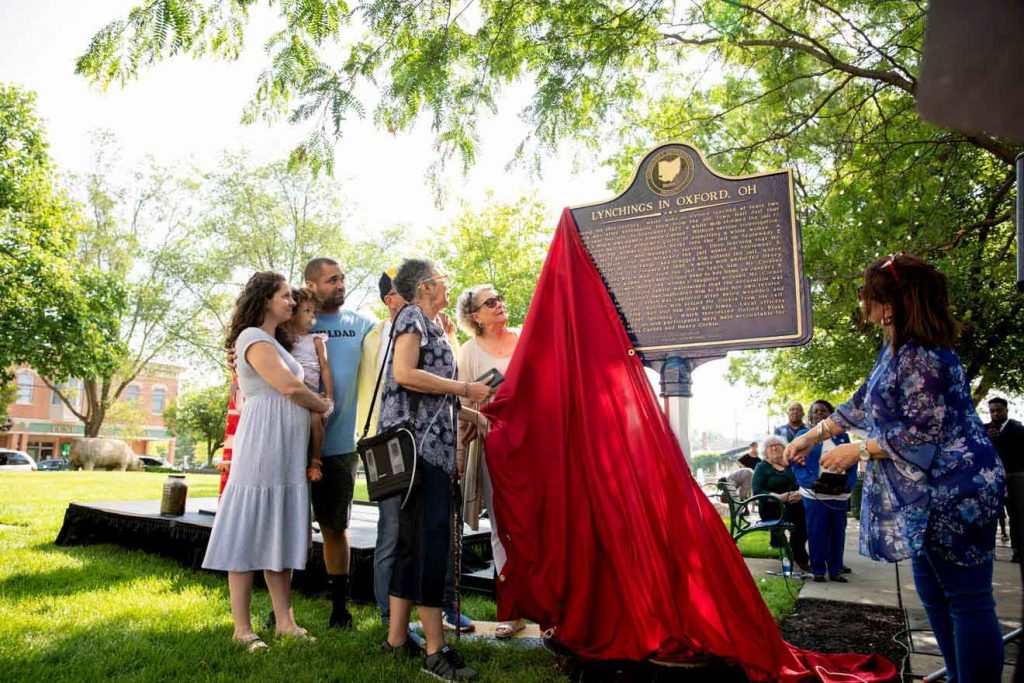 The descendants of Henry Corbin and Simeon Garnet, who were lynched in 1877 and 1892 in Oxford, unveil the historical marker memorializing their family members. 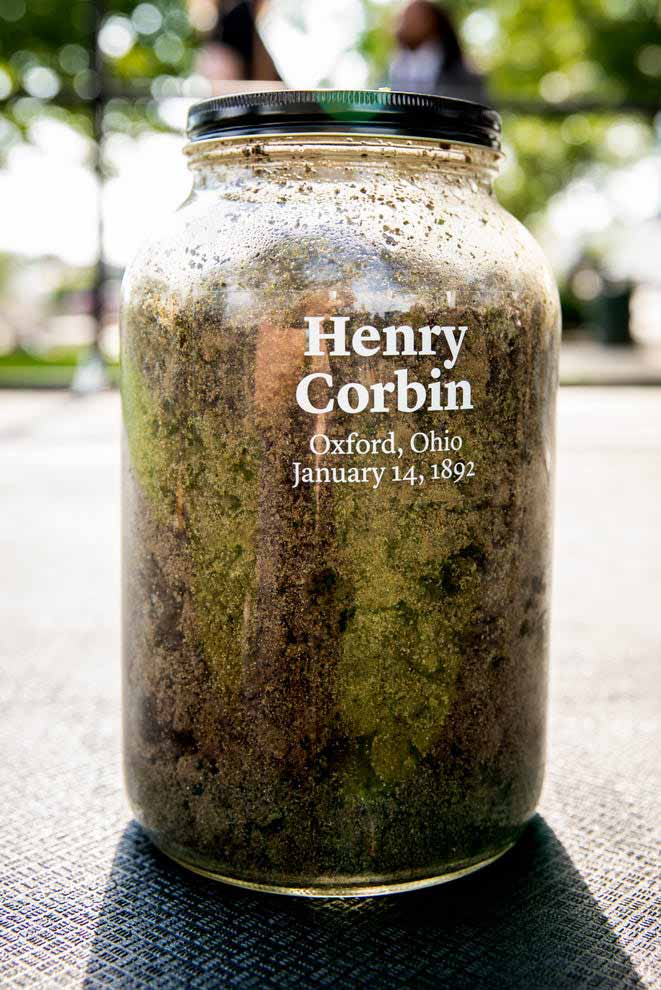 A soil jar memorializing Henry Corbin, who was lynched in Oxford, Ohio, in 1892. 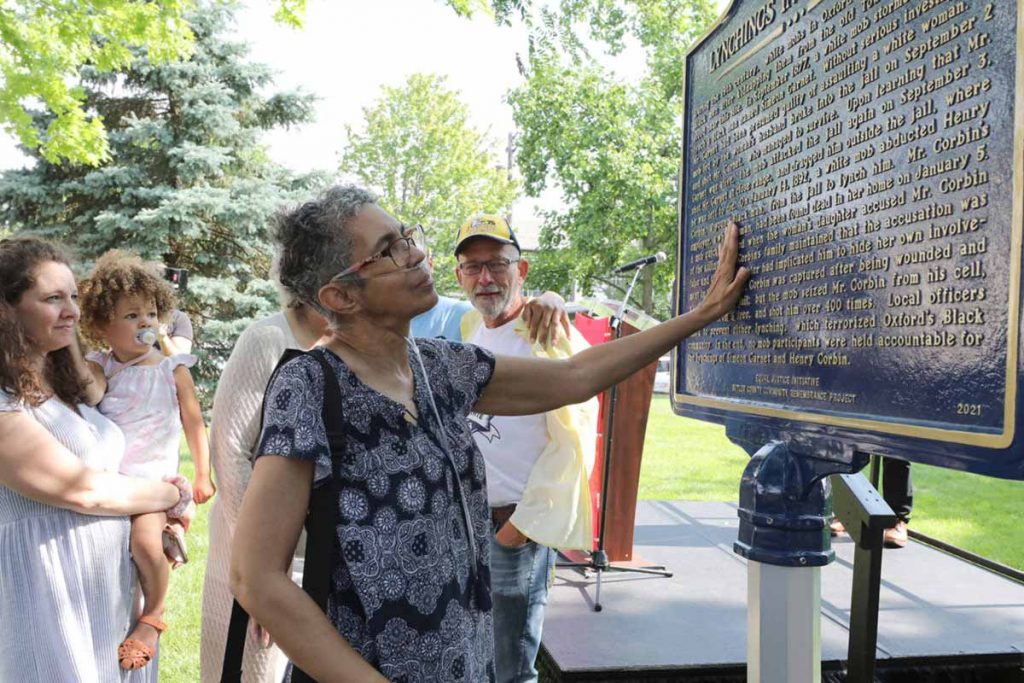 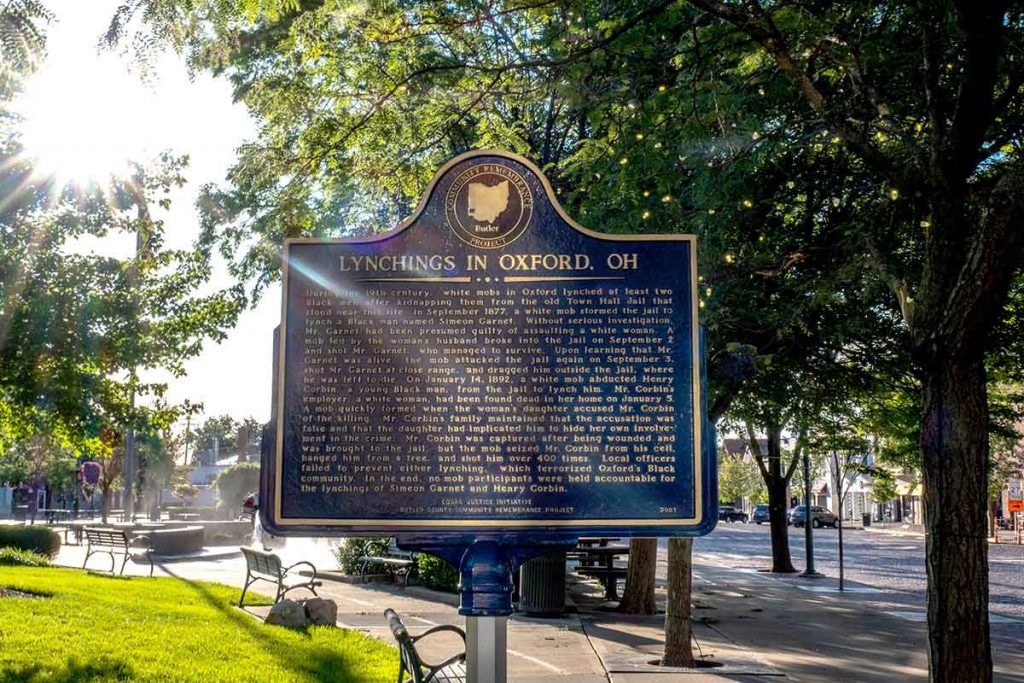 The descendants of Henry Corbin and Simeon Garnet, who were lynched in 1877 and 1892 in Oxford, unveil the historical marker memorializing their family members.

A soil jar memorializing Henry Corbin, who was lynched in Oxford, Ohio, in 1892.

EJI’s Community Remembrance Project partners with community coalitions to memorialize documented victims of racial violence throughout history and foster meaningful dialogue about race and justice today. The Community Soil Collection Project gathers soil at lynching sites for display in haunting exhibits bearing victims’ names. The Historical Marker Project erects narrative markers in public locations describing the devastating violence, today widely unknown, that once took place in these locations. These projects and the other engagement efforts that community coalitions develop, center the African American experience of racial injustice, empower African American community members who have directly borne this trauma, and invite the entire community to use truth to give voice to those experiences and expose their legacies.

EJI is very proud of the Community Remembrance Project and honored to work alongside community partners throughout the country who are taking on the challenging, necessary work of telling the truth about our history and building a future rooted in justice.