The Montgomery City Council voted unanimously to rename the street in honor of Fred Gray after changing local rules governing the street renaming process, and Fred D. Gray Avenue was unveiled on October 26, 2021. The state attorney general’s office fined the city $25,000 for violating the 2017 law that punishes municipalities for removing Confederate monuments and other memorials; an anonymous donor agreed to pay the fine.

In December, Montgomery Mayor Steven Reed unveiled a plan to rename West Jeff Davis Avenue in honor of Fred Gray, the Montgomery lawyer and civil rights champion who represented Rosa Parks and the dozens of Montgomery residents who were arrested for participating in the Montgomery bus boycott, including Dr. Martin Luther King Jr. Mr. Gray’s work in the Browder v. Gayle case resulted in the Supreme Court ordering Alabama to abolish segregation on public buses. He later represented Black students who were denied admission to Alabama universities because of their race and secured a settlement for victims of the Tuskegee Syphilis Experiment. 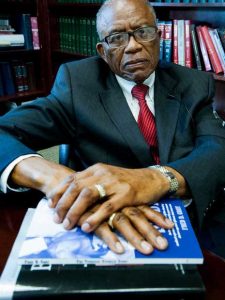 The recipient of numerous national awards for his courageous and relentless advocacy for equality and justice, including the Southern Christian Leadership Conference’s Drum Major Award, the NAACP’s William Robert Ming Advocacy Award, and the Equal Justice Award and Spirit of Excellence Award from the American Bar Association, Mr. Gray was elected as the first Black President of the Alabama State Bar in 2001.

He was also one of the first two African Americans to serve in the Alabama Legislature since Reconstruction and served for over four decades. In 2019, he was honored with a Living Legends Award from the National Black Caucus of State Legislators.

Fred Gray grew up on the Montgomery street named for Confederate President Jefferson Davis. He said he is honored by the proposal to rename the street. “I hope what I have done has helped to change things,” Mr. Gray told the Montgomery Advertiser. “It all started with instruction that I received when I lived on West Jeff Davis.”

Mayor Reed said that changing the street name would signal the city’s ongoing commitment to the pursuit of equality for all here.

But the plan faces a major obstacle imposed by the State of Alabama, which enacted a law in 2017 to prevent communities from addressing racially insensitive memorials, symbols, and monuments. The law prohibits the “relocation, removal, alteration, renaming, or other disturbance of” any Confederate or other monument that is at least 40 years old—and imposes a $25,000 fine on cities that do so.

The law also bars local governments from renaming buildings and streets with historical names that have been in place at least 40 years. Mayor Reed said individuals have volunteered to pay the fine the city would incur for renaming the street for Fred Gray.

The Truth About Confederate-Named Schools

Every day in the U.S., thousands of children across the country attend schools named in honor of Confederate leaders who fought to preserve slavery and racial hierarchy in America.

Alabama Rep. Juandalynn Givan (D-Birmingham) proposed a bill earlier this year that would have repealed the 2017 Monument Preservation Act. The Republican-controlled House Judiciary Committee did not even allow a vote on the bill after an amendment to allow removed monuments to be transferred to cemeteries and parks failed.

One of those parks is the Confederate Memorial Park, created by the state legislature in 1964 as a “shrine to the honor of Alabama’s citizens of the Confederacy” and funded (to the tune of $671,584 in 2020) by a property tax levied in 1901 to fund pensions for Confederate soldiers that Alabamians still pay today. A proposed bipartisan bill to direct an equivalent amount of funding to Black history preservation in Alabama has not yet been introduced.

A Republican-sponsored bill introduced by Rep. Mike Holmes (R-Wetumpka) that would increase penalties for removing Confederate monuments received a public hearing last week during which Rep. Holmes asserted the soundly debunked myth that the Civil War was not about slavery. HB242 would impose a $10,000 fine on elected officials and institutions, including universities, for each day a monument is removed.

Confederate monuments romanticize a society founded on white supremacy and valorize those who fought on its behalf. Nearly 2,000 such monuments stand today throughout the U.S.

The city faces another hurdle that has slowed the renaming process considerably—a municipal ordinance that requires at least 60% of property owners on the street to agree to the name change. Of 61 replies the city has received since December, over 30% opposed the name change.

Citing these and other concerns, Montgomery City Council members on Tuesday voted unanimously in favor of a resolution expressing support for naming “an undetermined site or street” in honor of Fred Gray—just not necessarily West Jeff Davis Avenue. Mayor Reed said the vote nonetheless helps move the renaming effort forward by showing support for the process.