Relatives and descendants of Jim Press Meriweather and Ed Bracy stand with Arthur Nelson (center) to unveil the historical marker.

On Saturday, the Lowndes County Community Remembrance Coalition, in partnership with EJI, dedicated a historical marker in remembrance of Ed Bracy, Jim Press Meriweather, and G. Smith Watkins, three Black sharecroppers and union leaders who were lynched in Lowndes County, Alabama, in 1935.

Installed in Fort Deposit, the historical marker is located on the grounds of Hopewell Church, originally called Mt. Willing Church. Built in 1832 by enslaved people who were forced to sit in the segregated sections when they attended service, the Hopewell Church currently is in the process of being preserved as an historical site. “Slavery as it exists among us,” read an 1860 letter in the Hayneville Chronicle, “is sanctioned by the Constitution, by the Bible, and it ought to be extended.” 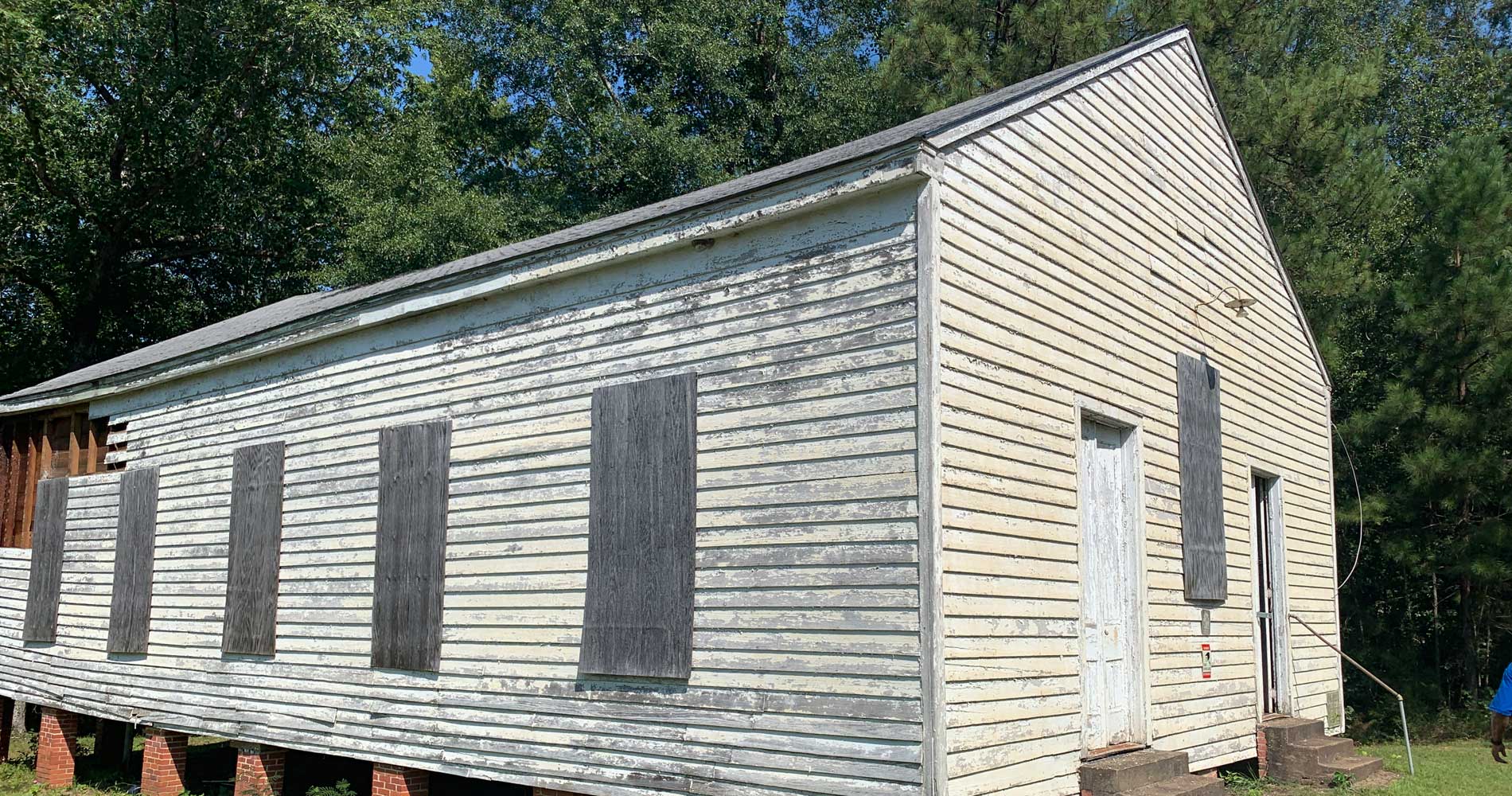 Mt. Willing Church, currently known as Hopewell Church, is situated near and is under the ownership of Snow Hill Christian Church in Fort Deposit, Alabama.

In 1935, hundreds of Black sharecroppers in Lowndes County staged a strike to protest poor pay and mistreatment. In response, white mobs and local law enforcement arrested and attacked Black leaders in a terror campaign, lynching at least three Black men within two weeks.

On August 22, a white mob shot prominent Black leader Jim Press Meriweather and left him to die in the woods. The mob then demanded information from his wife, Annie Mae. When she refused, the mob stripped her, hanged her from a wooden beam, and beat her unconscious with a knotted rope. Though the mob left her for dead, Mrs. Meriweather survived.

Six days later, police arrested G. Smith Watkins, a Black preacher who helped lead the strike. Rev. Watkins never reached the jail. His body was found weeks later; he had been shot to death in a swamp near the county line.

On September 2, a white mob organized by the Lowndes County Sheriff ambushed Black leader Ed Bracy at his home in Hope Hull and fatally shot him 19 times in the neck and head.

After the South lost the Civil War in 1865, many white people remained committed to white supremacy and determined to use violence to oppress and exploit Black people. Between 1877 and 1950, white mobs lynched thousands of African Americans to intimidate Black communities and enforce racial hierarchy.

Jim Press Meriweather, G. Smith Watkins, and Ed Bracy were lynched to preserve white supremacy and warn the entire Black community not to demand equality. State and federal authorities did little to investigate the racialized anti-union attacks in Lowndes County, even after Mrs. Meriweather bravely testified before federal authorities in Washington, D.C. Of the more than 360 racial terror lynching victims documented in Alabama, at least 16 were killed in Lowndes County.

In conjunction with the dedication of the historical marker, the Lowndes County Community Remembrance Coalition hosted a Racial Justice Essay Contest in collaboration with EJI and awarded a total of $2,500 in scholarships. The winners were Kensley Rodriguez (First Place), Devontae Rudolph (Honorable Mention), and Jalyn Zinn (Honorable Mention).

EJI has partnered with members of the coalition to install two additional historical markers in Lowndes County. In August 2016, EJI partnered with community members to dedicate a marker in memory of the Cross family. On March 3, 1900, a mob lynched Jim Cross, a Black man, and his wife, son, and daughter, after he condemned the lynching of another Black man. No one was ever arrested for their killings.

In December 2020, a historical marker was installed at the Lowndes County Courthouse in Hayneville, Alabama, to memorialize the 1888 lynching of Theo Calloway. Accused of killing a white man, Mr. Calloway was abducted from police custody by a mob of at least 200 white men and hanged from a chinaberry tree on the courthouse lawn. His lifeless body riddled with bullets, Mr. Calloway was killed just hours before he was scheduled to appear in court.

We believe that understanding the era of racial terror is critical if we are to confront its legacies in the challenges we currently face from mass incarceration, excessive punishment, police violence, and the presumption of guilt and dangerousness that burdens people of color today.