Last night, Kenny Smith became the second Alabama death row prisoner in less than two months to survive an attempted execution by the state of Alabama. Mr. Smith was strapped to a gurney for over an hour while unnamed state corrections staff poked and prodded him in an effort to access his veins so that toxins could be injected that would kill him. Shortly before midnight, Alabama officials were forced to call off the execution when they could not complete the process.

The State’s botched execution follows its similarly botched attempt to execute Alan Miller on September 22, when Alabama Department of Corrections staff could not access veins and the execution had to be suspended. Two months earlier, a protracted and gruesome process was revealed surrounding the execution of Joe James, who was subjected to several hours of torturous needle sticks before he was executed.

Mr. Smith had argued in federal court that his execution should be stayed because the State could not be trusted to reliably carry out a lethal injection execution without an unacceptable risk of unnecessary torture in violation of the Eighth Amendment. Mr. Smith’s lawyers asserted that Joe James’s botched execution and Alan Miller’s aborted execution “demonstrated for the first time that ‘once ADOC is allowed to begin an execution, it will not stop until the warrant expires, and during that time, will do anything to obtain intravenous (‘IV’) access, including disregarding its own [Protocol]’ and will continue well beyond the point where the conduct has become unnecessarily cruel and painful.”

Calls for a Moratorium on Alabama Executions Grow

The failed attempt to place an IV during Alan Miller's execution is at least the third time in the last four years that Alabama has botched a lethal injection execution.

The State argued that it was too late for courts to consider Mr. Smith’s challenge, even though his claim was based on information that became apparent only after the Alabama Department of Corrections botched Joe James’s execution in July and failed to execute Alan Miller in September.

After reviewing the evidence, the Eleventh Circuit Court of Appeals agreed with Mr. Smith and stayed his execution, expressing concern that the State could not competently carry out the execution without more review.

Two hours later, the stay of execution issued by the Eleventh Circuit was vacated by the U.S. Supreme Court over the dissent of three justices, and the State was free to execute Mr. Smith.

No one outside prison staff—not the public or the person’s lawyer—is allowed to observe when prison guards try to insert an IV line at the beginning of an execution. As predicted by Mr. Smith and the lower federal courts, the State’s secretive process for managing executions produced yet another failed attempt.

Yet Alabama is still fighting in court to keep its execution process secret even though it has now botched four executions in the last four years.

Kenny Smith’s jury decided by a vote of 11-1 that he should be sentenced to life in prison without the possibility of parole. But his elected trial judge overrode the jury’s verdict and imposed the death penalty. And even though Alabama abolished judge override in 2017, the State still planned to execute Mr. Smith on November 17.

Kenny Smith was just 22 years old when he was charged with capital murder in the 1988 killing of a woman whose husband was involved in an affair, had incurred substantial debts, and had taken out a large insurance policy on her. A week after the murder, when the investigation started to focus on the husband as a suspect, he committed suicide.

Prosecutors argued that Mr. Smith, along with two other men, was paid by the husband to kill his wife. Mr. Smith was convicted of capital murder for hire.

At the sentencing hearing, the jury found one aggravating circumstance (that it was a murder for hire) and several mitigating circumstances, including his young age, that he had no significant criminal history, he appeared to be remorseful for what he had done, his good conduct in jail and in counseling family members and others, and that he was neglected and deprived as a young child.

Jurors weighed the evidence and determined that the mitigating factors outweighed the single aggravator. The jury voted 11-1 to impose life imprisonment without parole. The sentencing judge, however, rejected their nearly unanimous verdict and condemned Mr. Smith to death. 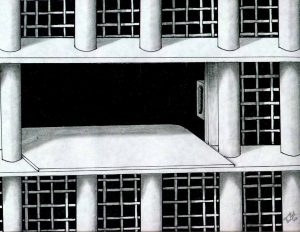 A drawing by Mr. Smith.

No one whose jury voted for life has been executed in Alabama since override was abolished.

Lawyers for Mr. Smith argued that his execution would violate the Eighth Amendment’s bar on cruel and unusual punishment because a jury of his peers rejected the death penalty in his case.

Remembering Black Veterans Targeted for Racial Violence in the U.S.