Children’s shoes and toys were placed in a makeshift memorial outside the grounds of the former Kamloops Indian Residential School in British Columbia, where the remains of hundreds of Indigenous children have been discovered in unmarked graves.

The Department of the Interior plans to investigate hundreds of boarding school sites across the U.S., where Native children were forced to go in the 19th and 20th centuries. Prompted by the discovery in May of 215 Indigenous children’s remains in unmarked graves at a boarding school site in Canada, decades of complaints about the legacy of forced assimilation of Native people by the American government is getting attention.

Yesterday, the Penelakut Tribe announced that more than 160 additional undocumented and unmarked graves have been found on the site of a former boarding school off the British Columbia coast, bringing the total to nearly 1,000 unmarked graves discovered at former residential school sites in Canada over the last several months.

Secretary of the Interior Deb Haaland announced in June that her department will conduct an investigation to identify boarding school sites in the U.S. where students may be buried. The Federal Indian Boarding School Initiative will seek to determine the children’s identities and Tribal affiliations and will consult with Tribal Nations, Alaska Native corporations, and Native Hawaiian organizations about how to protect identified burial sites.

A final written report expected by April 1, 2022, will also detail the Interior Department’s oversight and implementation of the boarding school program based on a review of the agency’s own records.

The initiative is expected to expose Americans to the truth of what happened to Native American children at federal boarding schools—and to recognize the lasting legacy of what the first Native American Cabinet secretary described as our nation’s “history of taking Native children from their families in an effort to eradicate our culture and erase us as a people.”

“The Interior Department will address the inter-generational impact of Indian boarding schools to shed light on the unspoken traumas of the past, no matter how hard it will be,” Secretary Haaland said in a statement. “[O]nly by acknowledging the past can we work toward a future that we’re all proud to embrace.” 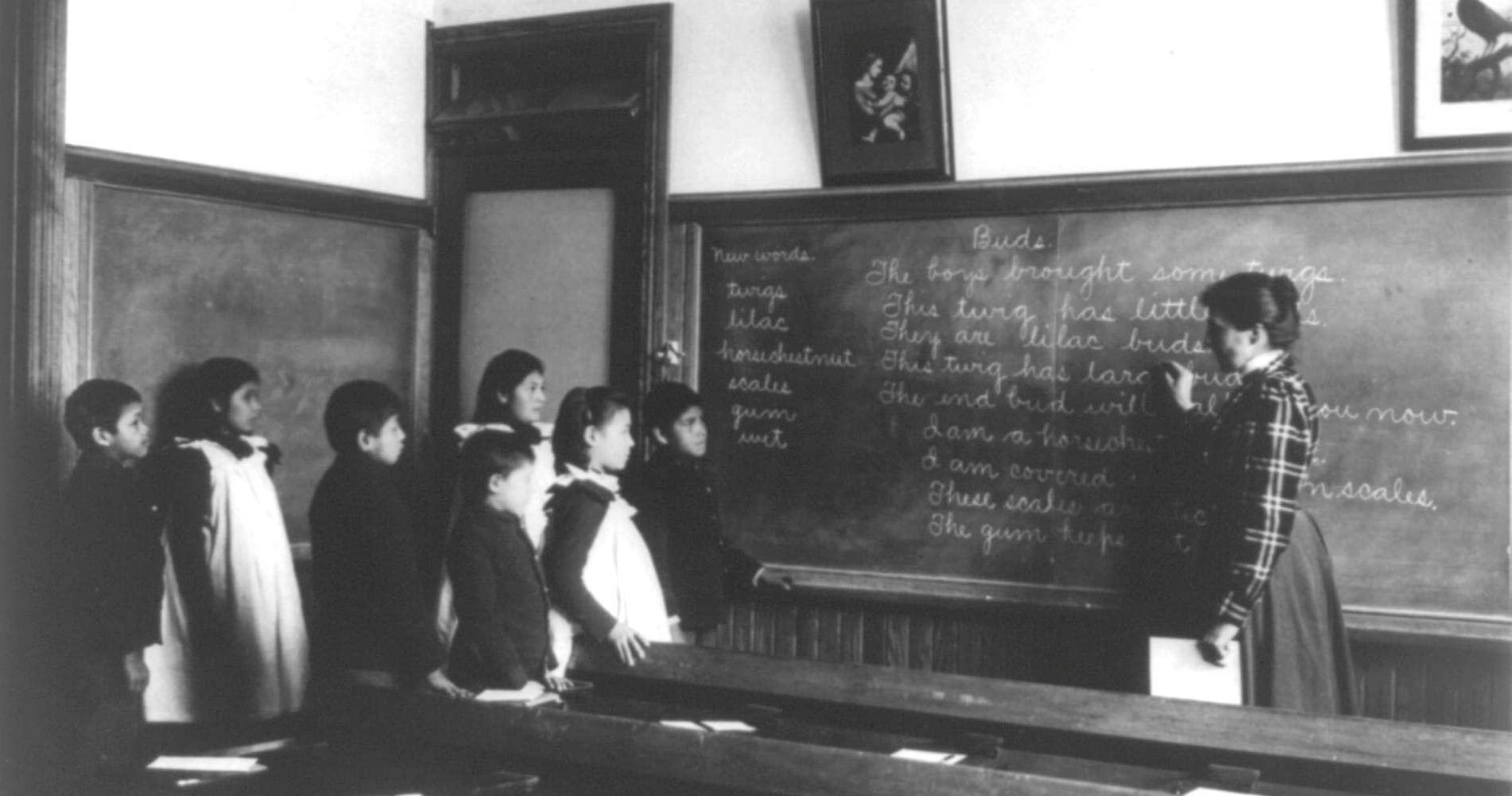 Native children at the Carlisle Indian Industrial School, a federally-funded boarding school where over 10,000 Indigenous children were put into forced assimilation programs. (Library of Congress)

“Kill the Indian, and Save the Man”

Beginning with the Indian Civilization Act of 1819, the U.S. government engaged in a cultural assimilation campaign by taking tens of thousands of Indigenous children from their families and forcing them to attend more than 365 boarding schools run by religious institutions and the U.S. government.

Secretary Haaland’s grandparents were among them, she wrote in an op-ed. Her great-grandfather was taken to the Carlisle Indian Industrial School in Pennsylvania. The school’s founder, Richard Pratt, established a national model for Indian boarding schools based on his “kill the Indian, and save the man” philosophy.

Many boarding schools used violence and brutal treatment to punish Indigenous children who resisted assimilation. At least 3.213 children died at boarding schools in Canada, according to a 2015 report of that country’s Truth and Reconciliation Commission—which characterized the system as “cultural genocide.”

Thousands of Native children were forced away from their families and sent to off-reservation boarding schools in misguided efforts to "civilize" them.

Children sent to federal boarding schools in the U.S. were forbidden to speak Native languages, made to renounce their beliefs, and forced to abandon their Native identities, including their names. Many children were leased out to white families as indentured servants.

Parents who resisted their children’s removal to boarding schools were imprisoned and had their children forcibly taken from them. Most parents were not allowed to visit their children at these schools, where students were routinely abused and injured. An unknown number of children died and were buried in unmarked graves.

A Legacy of Trauma

“The lasting and profound impacts of the federal government’s boarding school system have never been appropriately addressed,” Secretary Haaland wrote in her op-ed about the new initiative.

“This attempt to wipe out Native identity, language and culture continues to manifest itself in the disparities our communities face, including long-standing intergenerational trauma, cycles of violence and abuse, disappearance, premature deaths, and additional undocumented physiological and psychological impacts.”

“As the boarding school era began to wane and change, it then turned really into a different kind of system, but one that still removed children, often for unnecessary reasons, and that was through state and private child welfare agencies.” David Simmons, director of government affairs and advocacy for the National Indian Child Welfare Association, told NPR.

The Need for Truth-Telling

Advocates hope that Americans who learn the history of Indian boarding schools will commit to providing the resources needed to support Native American communities grappling with the traumatic legacy of government-sponsored cultural genocide.

“Nobody inside and outside of Indian country that’s a citizen of the United States is immune from this history. It’s our shared history,” National Congress of American Indians president Fawn Sharp told NPR. “So for that reason, it is urgent that we not let another generation pass where this tragedy is ignored.”

“Not only are we living with the impacts of ethnic cleansing and genocide, but we are without resources to even begin to confront [and] do the healing,” Ms. Sharp said.

Secretary Haaland observed that learning the history of Indian boarding schools will be uncomfortable, but underscored that we must confront the truth of our history in order to heal. She wrote:

“[T]he first step to justice is acknowledging these painful truths and gaining a full understanding of their impacts so that we can unravel the threads of trauma and injustice that linger.”

Deb Haaland: My grandparents were stolen from their families as children. We must learn about this history.