On June 19, nearly 200 people gathered in the City of Union in South Carolina to learn about the history of racial terrorism in their county, to memorialize the Black men, women, and children who were lynched between 1865 and 1950, and to acknowledge the ongoing resilience of the Black community. Attendees included descendants of the victims who were being memorialized and elders within the Union community.

The Union County Community Remembrance Project coalition partnered with EJI to unveil two historical markers in downtown Union. One documents the 1871 Union County Jail Raid Massacre in which 12 Black men were abducted and lynched by a white mob, and a second memorializes 19 victims of racial terror lynching killed in Union County between 1865 and 1950. The coalition also unveiled a marker in front of the historic jail where the 1871 massacre took place that was sponsored by the South Carolina Historical Marker Program.

Following the marker unveilings, the coalition hosted a soil collection ceremony in which soil was placed in jars to memorialize the county’s 19 victims of racial terror lynching. Coalition member and Director of the Union Tourism Office, Curtiss Hunter, said, “By honoring the soil where lynching victims died, we are acknowledging the history of bloodshed that has seeped into the earth while simultaneously reclaiming it as sacred.”

The ceremony concluded with remarks from coalition leaders Kate Borchard-Schoen and Timika Wilson, who invited the audience to continue reflecting on this history by reading the markers and placing soil in the jars.

“Our past informs our present. There is both power and healing in telling the truth about our history of racial violence and it is the foundation for our justice-centered approach,” said Timika Wilson. “We believe that by engaging in truth-telling about Union’s lynching history, we are recognizing the impact it had on the community, acknowledging the unjust systems that still cause harm today, and seeking to write a different story about Union’s future.”

After the dedication ceremonies, community members participated in a Juneteenth celebration festival with local arts, food, and wellness vendors.

After the Civil War, Black Americans were emancipated after more than two centuries of chattel slavery. Formerly enslaved people purchased land and built churches and schools, and eligible Black men registered to vote, served in the militia, and participated on juries.

At least 15 Black people were lynched in Union County from 1865 to 1877. In 1865, a white mob lynched Sax Joiner for allegedly writing a letter to a white woman. In 1871, Reverend Lewis Thompson, an AME Zion preacher and teacher in Goshen Hill, found a death note posted on the door of his church ordering him to cease preaching. Soon after, he was abducted, tortured, and lynched by a white mob.

Lynching inflicted terror not just on the people killed, but also traumatized their families and the entire Black community in an attempt to break their social, spiritual, and cultural bonds, and to maintain white supremacy.

The devastating Union County Jail Raid Massacre was one example of how racial violence was designed to terrorize the Black community during Reconstruction.

These Black men were South Carolina state militia members who were accused of killing a white man named Mat Stevens while he was illegally transporting bootleg whiskey.

Months later, the U.S. Congress held hearings in former Confederate states to investigate incidents of racial violence, including the Union Jail Raid Massacre. By the time of the hearings, some Black people had already fled the area, but despite intimidation, many family and community members like Eliza Chalk and Samuel Nuckles bravely testified.

No one was held accountable for this massacre and other acts of violence. Union County’s Black community resisted violence by migrating to safety or staying and building community institutions. Their resilience demonstrated powerful opposition to continued white supremacy throughout Reconstruction, Jim Crow, and beyond. 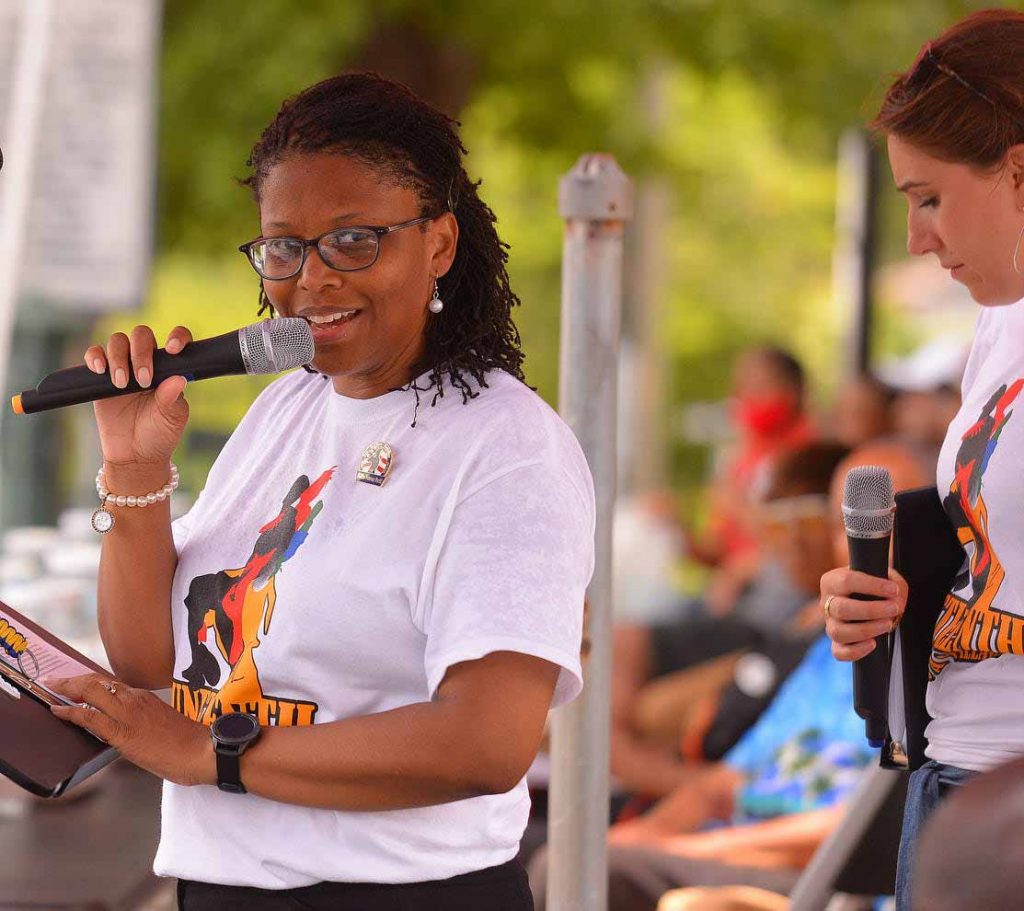 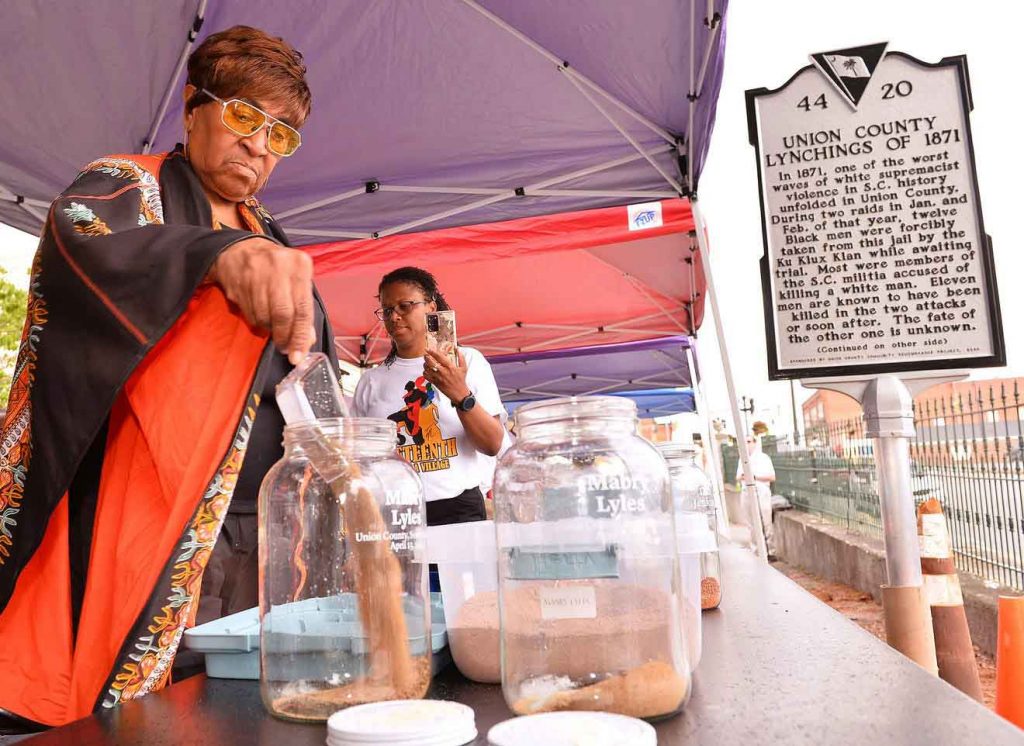 Dr. Vera Jeter-Jones adds soil to a jar memorializing her ancestor, Mabry Lyles, who was lynched in Union County in 1934. 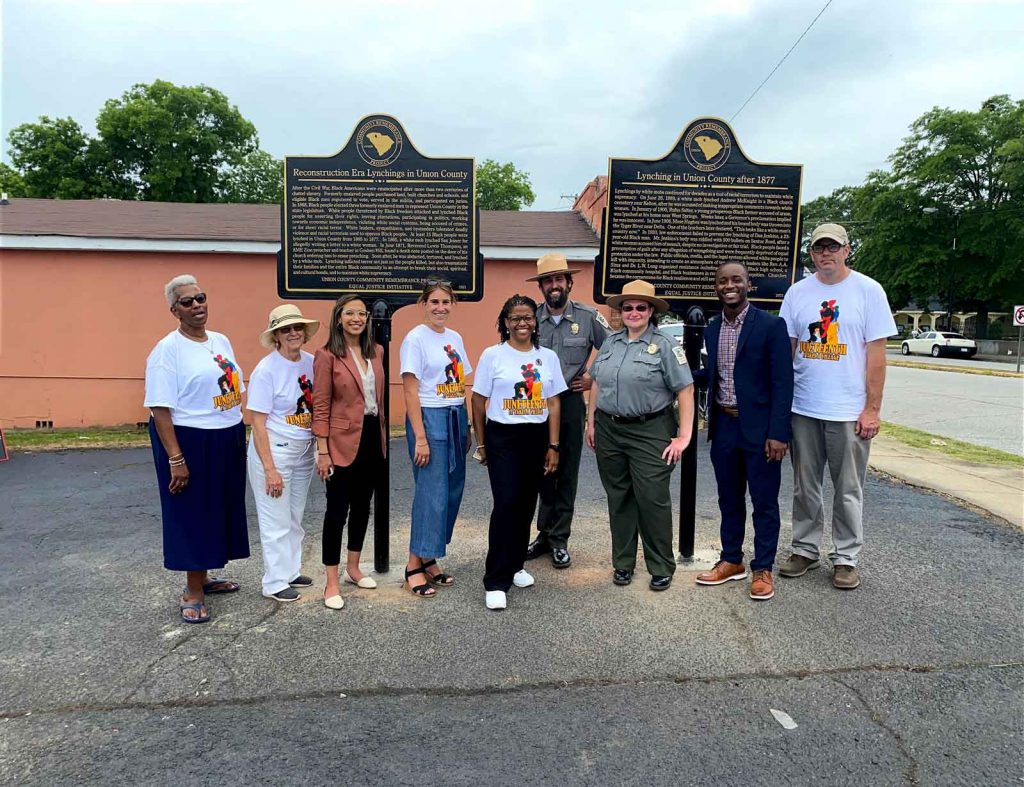 Members of the Union County Community Remembrance Project and EJI staff stand in front of the newly erected historical markers in Union County. 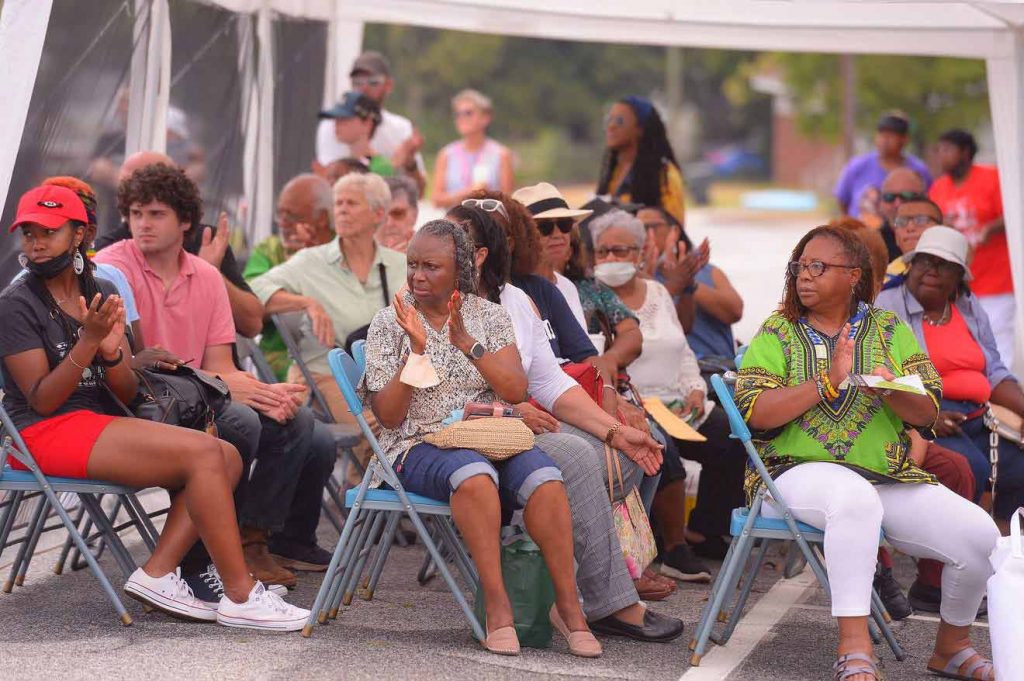 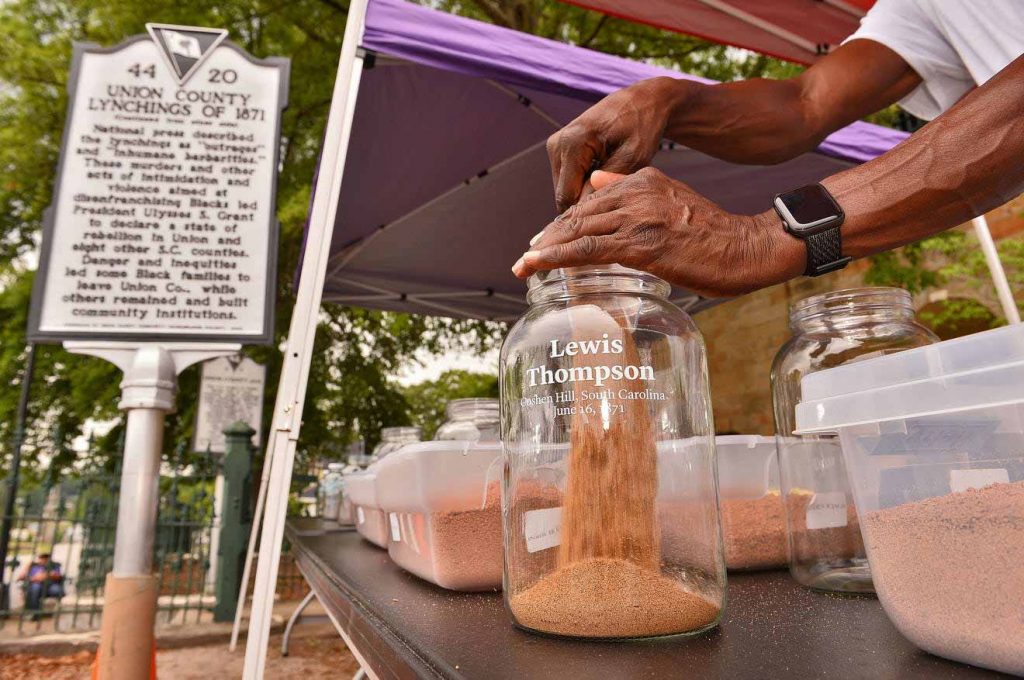 A man adds soil to a jar memorializing Lewis Thompson, who was lynched in Union County in 1871.

Dr. Vera Jeter-Jones adds soil to a jar memorializing her ancestor, Mabry Lyles, who was lynched in Union County in 1934.

Members of the Union County Community Remembrance Project and EJI staff stand in front of the newly erected historical markers in Union County.

A man adds soil to a jar memorializing Lewis Thompson, who was lynched in Union County in 1871.

Lynching in Union County after 1877

Lynchings by white mobs continued for decades as a tool of racial terrorism to maintain white supremacy.

On June 26, 1889, a white mob lynched Andrew McKnight in a Black church cemetery near Kelton after he was accused of making inappropriate comments towards white women.

In January 1900, Rufus Salter, a young prosperous Black farmer accused of arson, was lynched at his home near West Springs. Weeks later, a governor’s proclamation implied he was innocent.

In June 1906, Mose Hughes was lynched and his bound body was thrown into the Tyger River near Delta. One of the lynchers later declared, “This looks like a white man’s country now.”

In 1930, law enforcement failed to prevent the lynching of Dan Jenkins, a 23-year-old Black man. Mr. Jenkins’s body was riddled with 500 bullets on Santuc Road after a white woman accused him of assault, despite no investigation or fair trial.

Black people faced a presumption of guilt after any allegation of wrongdoing and were frequently deprived of equal protection under the law. Public officials, media, and the legal system allowed white people to kill with impunity, intending to create an atmosphere of terror.

Black leaders like the Rev. A.A. Sims and Dr. L.W. Long organized resistance, establishing a Black high school, a Black community hospital, and Black businesses in response to racial inequities. Churches became the cornerstone for Black resilience and still are to this day.

Community members and leaders, including South Carolina State Park Service staff from Rose Hill Plantation State Historic Site, Union County’s tourism director, NAACP leaders, and the mayor and his staff came together to form a coalition of people invested in telling the truth about Union’s history. These early coalition leaders saw an opportunity to develop the project as one of EJI’s Community Remembrance Projects and helped get the project off the ground in the fall of 2019. The South Carolina African American Heritage Commission organized the first meeting between all key coalition members in January 2020.