On May 15, the Washington County Community Remembrance Project (WCCRP) partnered with EJI to dedicate a memorial marker in the historic Oaks Cemetery to venerate the lives of Aaron, Anthony, and Randall, three victims of racial terror violence in Washington County, Arkansas, in 1856.

WCCRP coordinator RoAnne Elliott welcomed the dozens of community members to the unveiling of the marker. Then Wendell Huggins, a coalition member and one of the local caretakers of Oaks Cemetery, offered remarks about the importance of the memorial marker. He encouraged the audience to reflect on the past and acknowledge the connections to challenges in the community today.

Sharon Killian, founder and president of Northwest Arkansas Black Heritage, expressed gratitude to the late Melba Smith, a descendant of enslaved people in Washington County who had been instrumental in documenting Black oral history, including this incident of racial terror. After the marker was revealed, Margaret Holcomb, a historian who helped to document this local history, rang a bell to honor each victim and the community’s ongoing commitment to truth-telling.

The marker unveiling ceremony was followed by a Dedication and Awards Ceremony at the Fayetteville Public Library. The Dedication and Awards Ceremony featured art from local artists and music from the St. James Baptist Church youth choir. Guest speakers included Mr. Tom Lackey, a long-time resident of the Fayetteville community, who provided an account of his experience growing up in the community, and Ms. Patricia Morency, a mental health clinician in Counseling And Psychological Services (CAPS) at the University of Arkansas, who offered remarks about historical trauma.

Local oral history contends that, on May 29, 1856, James Boone, a white man, had attempted to sexually assault an enslaved Black woman who fatally assaulted him in self defense. The Boone family then implicated three enslaved Black men—Aaron, Anthony, and Randall—in Boone’s death.

On July 7, 1856, a white mob from present-day Elkins, Arkansas, kidnapped and lynched Anthony, a Black man, and Aaron, a Black teenager, after they were put on trial at the Washington County Courthouse in the death of James Boone, who enslaved them.

Anthony was acquitted and Aaron was released due to lack of evidence.

Disregarding the rule of law, a mob led by Boone’s sons reacted violently, lynching Anthony and Aaron near the jail, most likely on the estate of Archibald Yell, the deceased former governor of Arkansas.

Randall was convicted by an all-white jury for killing Mr. Boone. He contested the verdict but was denied a retrial.

Like lynchings, court-ordered executions—with mobs standing by—did not require reliable findings of guilt. Randall was hanged by the state on August 1, 1856, likely on Gallows Hill, which is now within the Fayetteville National Cemetery next to Oaks Cemetery.

During this era, enslaved Black people commonly faced violence by white enslavers. Slavery in Washington County, as elsewhere, devalued the lives of Black people, resulting in violence, including sexual assaults and lynchings, for which white perpetrators were rarely held accountable.

The Washington County Community Remembrance Project formed in 2018 and operates as a program of the Northwest Arkansas African American Heritage Association. The community was inspired by the One Community Read of Just Mercy in 2016 and several members had the opportunity to visit the Legacy Museum and National Memorial for Peace and Justice in 2018.

Since beginning their group in the summer of 2018, the coalition has been active in educational programming in the community, including local research, lectures, and oral history interviews. The coalition remained committed to ongoing research and intentional community coalition building throughout 2020, despite the difficulties of navigating the Covid-19 pandemic. 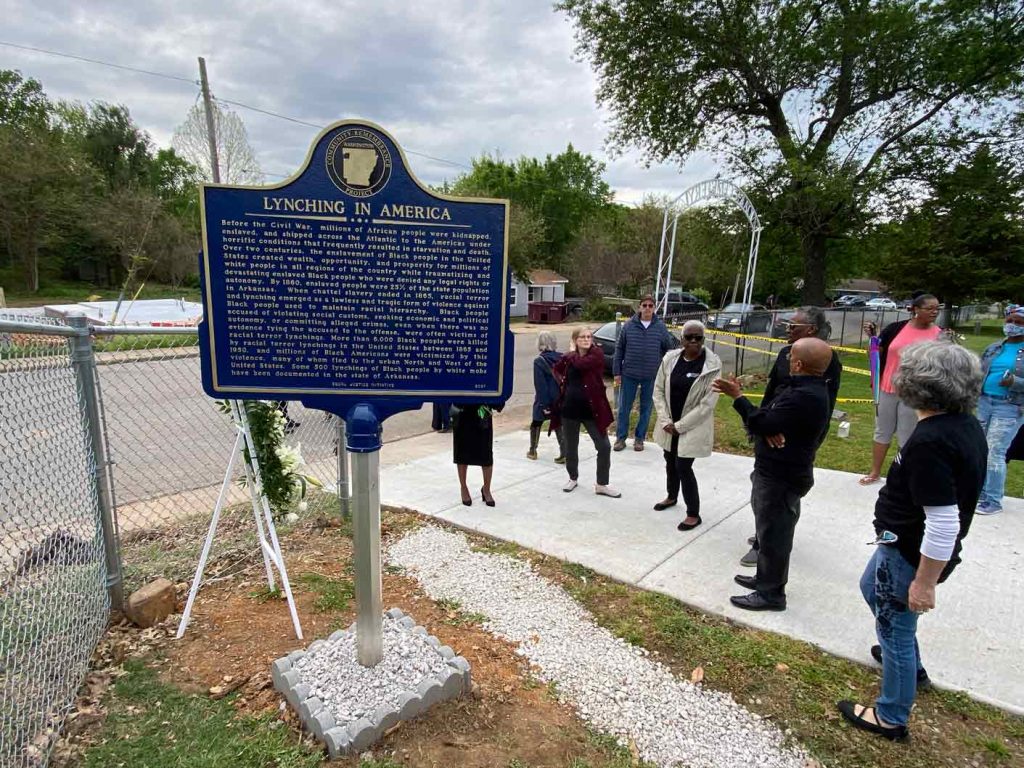 Members of the Washington County Community Remembrance Project gather during the marker unveiling ceremony on May 15, 2021. 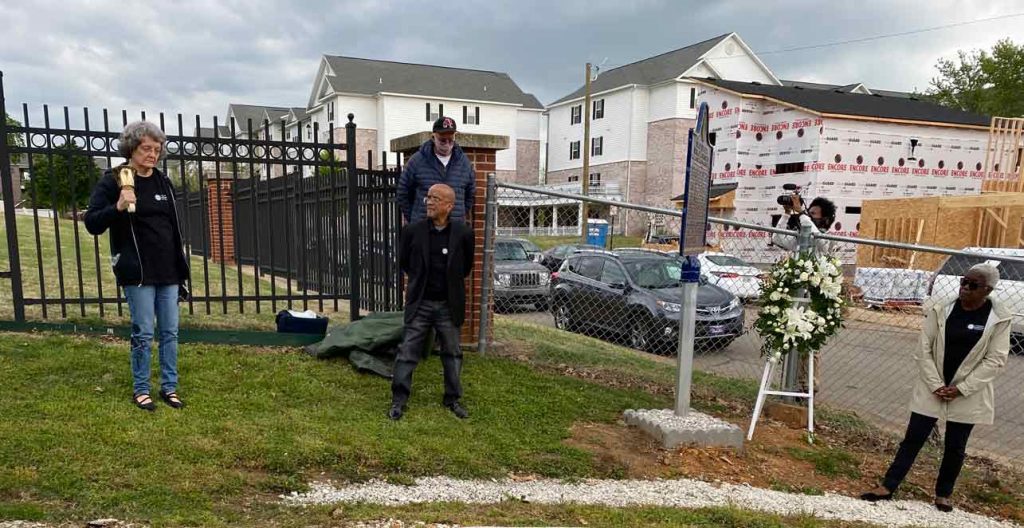 Members of the Washington County Community Remembrance Project ring a bell during the marker unveiling ceremony in remembrance of each victim. 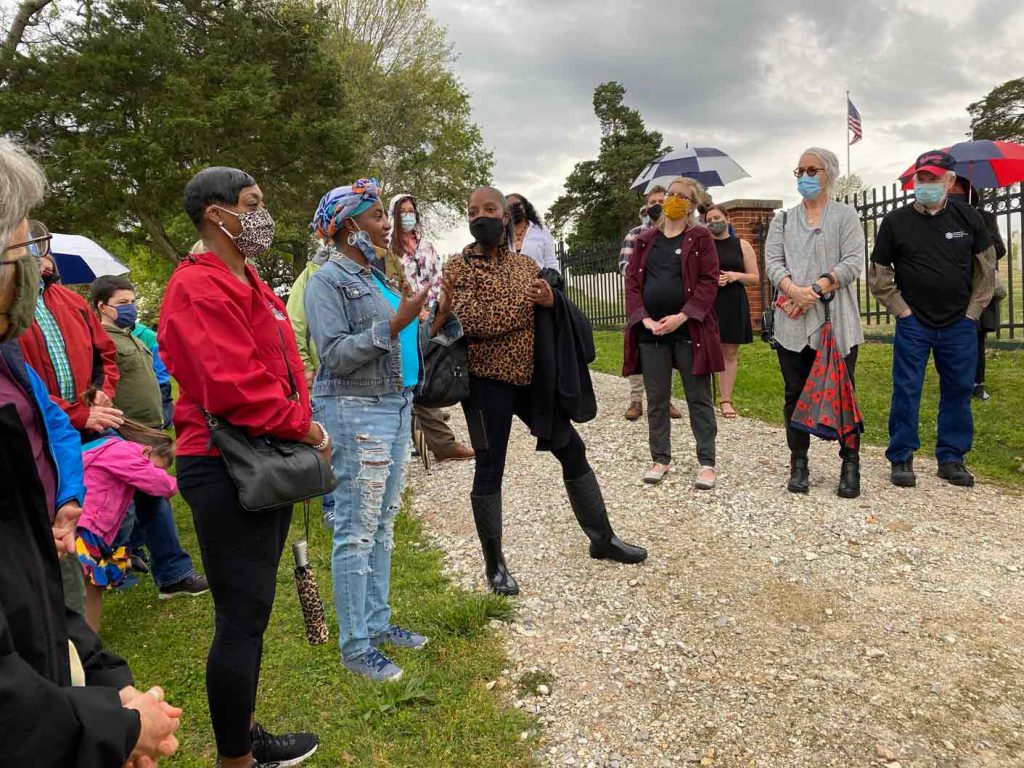 Community members gather at Oaks Cemetery in Washington County, where the historical marker was installed. 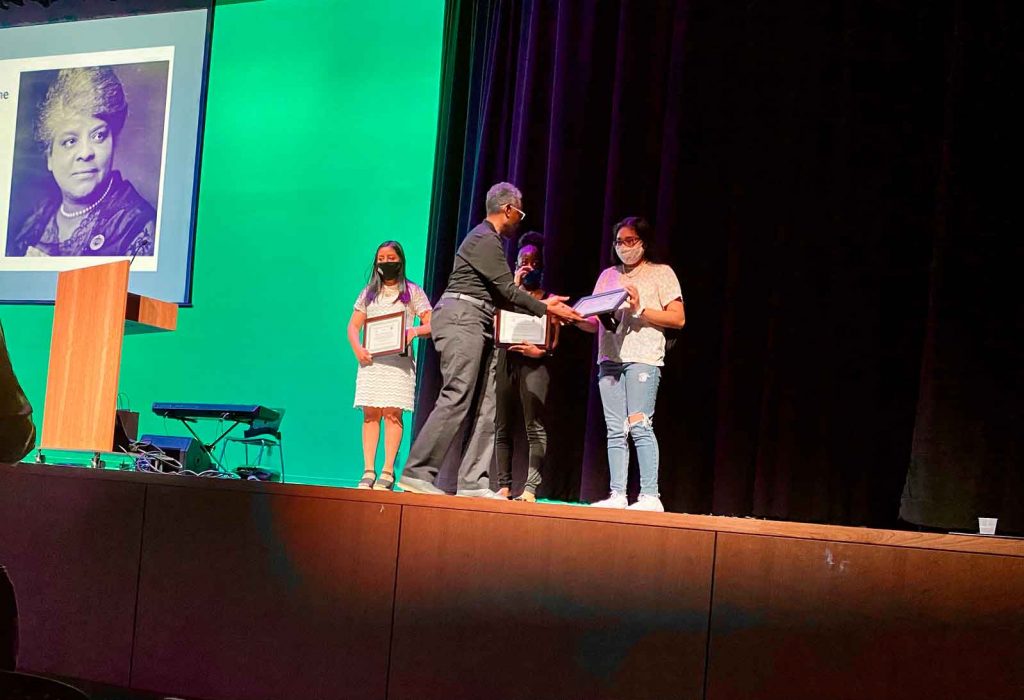 Scholarships and prizes are awarded to students who participated in the Racial Justice Essay Contest during a ceremony at the Fayetteville Public Library. 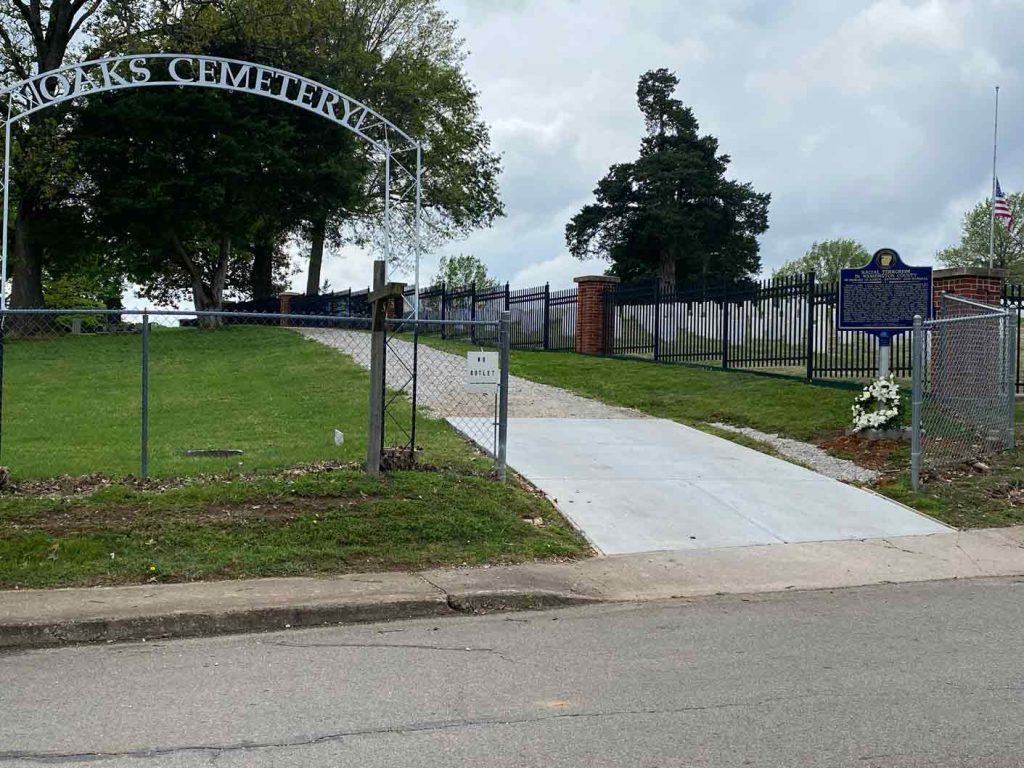 The marker sits at the entrance of the historic Oaks Cemetery in Washington County, close to where Randall was hanged in 1856.

Members of the Washington County Community Remembrance Project gather during the marker unveiling ceremony on May 15, 2021.

Members of the Washington County Community Remembrance Project ring a bell during the marker unveiling ceremony in remembrance of each victim.

Community members gather at Oaks Cemetery in Washington County, where the historical marker was installed.

Scholarships and prizes are awarded to students who participated in the Racial Justice Essay Contest during a ceremony at the Fayetteville Public Library.

The marker sits at the entrance of the historic Oaks Cemetery in Washington County, close to where Randall was hanged in 1856.

Before the Civil War, millions of African people were kidnapped, enslaved, and shipped across the Atlantic to the Americas under horrific conditions that frequently resulted in starvation and death. Over two centuries, the enslavement of Black people in the U.S. created wealth, opportunity, and prosperity for millions of white people in all regions of the country while traumatizing and devastating enslaved Black people who were denied any legal rights or autonomy.

By 1860, enslaved people were 25% of the state population in Arkansas. When chattel slavery ended in 1865, racial terror and lynching emerged as a lawless and tragic form of violence against Black people used to maintain racial hierarchy. Black people accused of violating social customs, seeking economic and political autonomy, or committing alleged crimes—even when there was no evidence tying the accused to the offense—were often victims of racial terror lynchings.

Based on EJI’s Lynching in America and Reconstruction in America research, EJI has documented nearly 6,500 racial terror lynchings in America between 1865 and 1950. Millions of Black Americans were victimized by this violence, many of whom fled to the urban North and West. Some 500 lynchings of Black people by white mobs have been documented in the state of Arkansas.

Recording of the Dedication and Awards Ceremony