On July 17, the Tallahassee Community Remembrance Project gathered with EJI and community members in Cascades Park, under the oak tree at the corner of East Gaines and South Meridian Streets, to dedicate a historical marker in remembrance of Ernest Ponder, Richard Hawkins, Mick Morris, and Pierce Taylor, Black victims of racial terror violence in Leon County, Florida. The marker was placed near the site of the jail from which the four men were abducted. The historic jail was demolished recently and replaced with a new hotel.

Although weather forced the ceremony indoors, hundreds of people were still able to participate in the program. Byron Greene, one of the coalition co-conveners, opened the ceremony with a welcome followed by a prayer from the Rev. Abigail Moon.

Recognizing the importance of engaging youth in these efforts as well, the coalition invited third-grade student Carter Nixon to give a piano performance during the ceremony. As he played “Lift Every Voice and Sing,” the audience sang along. EJI Deputy Director of Community Education Kiara Boone and Project Manager Trey Walk then offered remarks on behalf of EJI.

Fortunately, ​​the weather cleared and the ceremony was moved outside for the unveiling of the historical marker. To transition to this part of the ceremony, Dr. Dan Leshem offered remarks that detailed how Jewish communities have Holocaust remembrance traditions that we can learn from when remembering the history of racial violence in the U.S.

A coalition member led attendees in singing “Lift Every Voice and Sing.” The Rev. Julius McAllister Jr. from Bethel AME Church offered remarks and a prayer.

Following the unveiling of the marker, participants were invited to attend an interfaith prayer service at the nearby amphitheatre.

These lawless acts of violence were carried out after African Americans were accused of misconduct or crimes, often without evidence, denying them the right to an impartial investigation and fair trial. Instead, white mobs frequently pulled lynching victims from jails, often facing little to no resistance from law enforcement officers who were legally required to protect the Black people in their custody.

In 1897, a white mob abducted Pierce Taylor from the county jail and hanged him from an oak tree in the jail yard before repeatedly shooting his lifeless body. In 1909, after Mick Morris was condemned to die in an unreliable trial that lasted less than a day, a white mob dragged him from the jail and lynched him.

More than two decades later, in 1937, a white mob kidnapped two Black teenagers, Richard Hawkins and Ernest Ponder, from the jail. The mob shot and killed the young men before dumping their bodies into a grove of oak trees along the Jacksonville highway. A note found next to their bodies read: “This is the beginning, who is next.”

No one was held accountable for committing these acts of racial terror.

In 2017, after learning about community efforts to memorialize racial terror lynchings in Nashville, Tennessee, community members in Tallahassee were inspired to begin organizing to support a similar effort in their community.

St. John’s, St. Michael and All Angels Episcopal Church, and First Presbyterian Church began the organizing. Under the leadership of Byron Greene, Sandra Howard, and Blan Teagle, the group hosted informational meetings to inform others about the project and to invite them to join the effort. Today, the coalition has over 40 community partners.

On February 29, 2020, the Tallahassee Community Remembrance Project hosted a community soil collection in remembrance of Pierce Taylor, Mick Morris, Richard Hawkins, and Ernest Ponder at the site where the historical marker now stands.

The coalition is working to develop curriculum and continue programming to help raise local community consciousness about this history and its legacies. 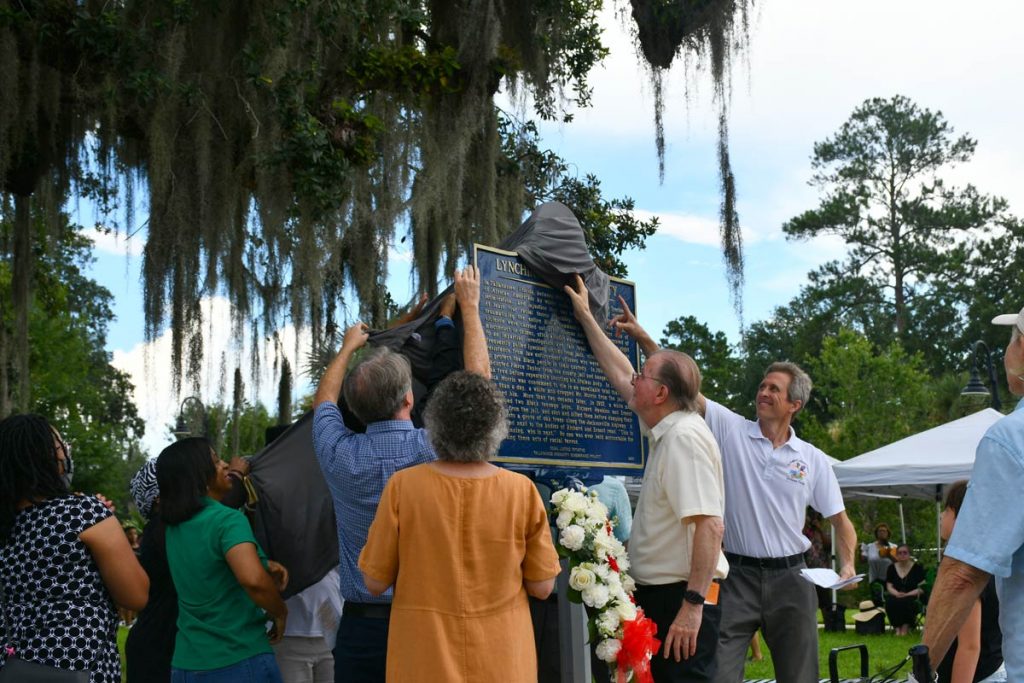 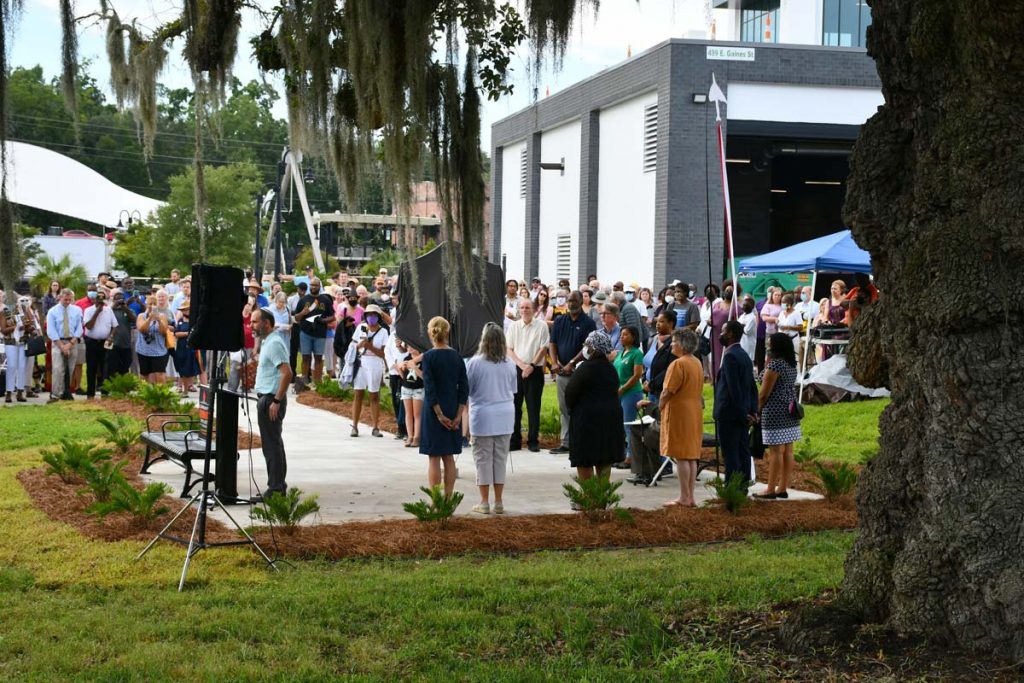 Community members gathered in Cascades Park for a marker dedication ceremony on July 17, 2021. 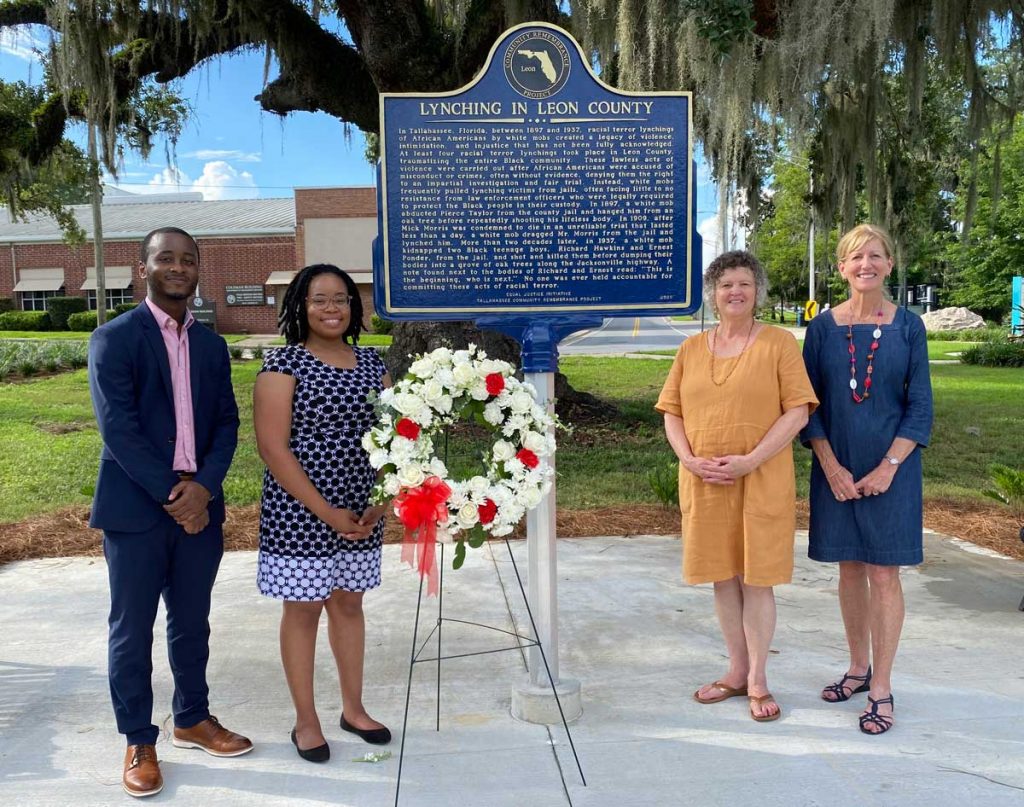 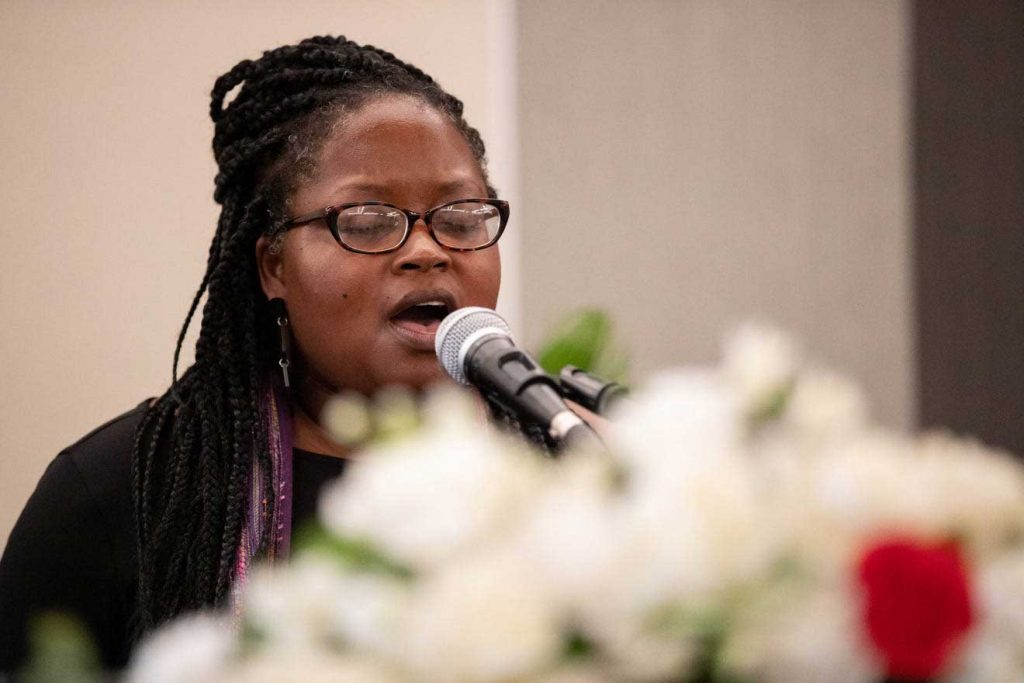 Community members gathered in Cascades Park for a marker dedication ceremony on July 17, 2021.

Between 1877 and 1950, thousands of African Americans were victims of mob violence and lynching across the U.S. Following the Civil War, white Southerners fiercely resisted equal rights for African Americans and sought to uphold an ideology of white supremacy through intimidation and fatal violence.

Lynching emerged as the most public and notorious form of racial terrorism. State and federal officials largely tolerated these lawless killings of Black women, men, and children by refusing to hold mob participants accountable for their crimes.

Many African Americans were lynched for resisting economic exploitation, violating perceived social customs, engaging in interracial relationships, or being accused of crimes, even when there was no evidence tying the accused to any offense. Public spectacle lynchings were attended by thousands of white spectators without fear of legal repercussions, and law enforcement frequently failed to intervene to prevent lynchings.

Although the names and stories of many victims may never be known, over 315 racial terror lynchings have been documented in Florida, with at least four in Leon County.