The marker is located at the corner of North Church and West Liberty Streets in Salisbury. This site is between the Oak Grove-Freedman’s Cemetery and the Rowan County Detention Center (near the original county courthouse) as a symbol of remembrance of the local history of racial injustice and the community’s civic duty and commitment to seek justice for all.

On the evening of August 6, more than one hundred community members gathered at the marker at Soldiers Memorial AME Zion Church for the first part of the dedication ceremony, “Truth Be Told: A Service of Remembrance and Dedication.”

North Carolina Poet Laureate Jaki Shelton Green gave a moving keynote address to mark the occasion. She also shared with the audience about her personal experience visiting EJI’s Legacy Museum and National Memorial for Peace and Justice and the profound impression the sites had on her personally and emotionally. 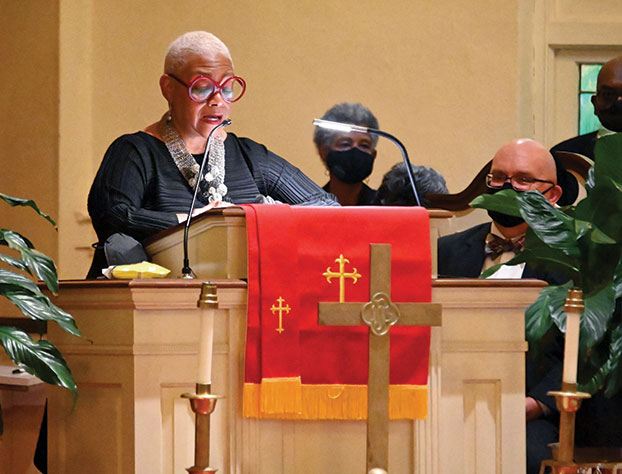 “This evening, our screams, our sighs, our songs, our moans, our tears, our wailing becomes the fertile ground for remembering to remember,” she said. “The children should know the names and speak the names” of people victimized by racial terror lynchings.

Mayor Karen Alexander offered remarks in support of the community’s organizing work to install the marker.

The community included language on the marker about the Salisbury City Council’s January 2019 decision to adopt a Resolution of Reconciliation, which condemned acts of violence and racial terrorism that targeted African Americans and was intended to initiate a process of “reconciliation of racial injustice.”

The co-chairs of Actions in Faith and Justice, the Reverend Olen Bruner and Susan Lee, helped to provide context for the evening’s events and encouraged the audience to remain engaged and to see this marker as part of a bigger effort to seek truth and justice in the community.

On August 7, community members were invited to attend a presentation by EJI staff members to learn more about EJI’s Community Remembrance Project. This community discussion was followed by an arts program titled, “Truth Be Told: Strength, Hope, Resilience,” which featured musical performances by the Reach Praise Choir, a dance performance by Younique Starz Dance Team, and poetry by Jah Smalls, Sabrina Harris, and Jaki Shelton Green.

After‌ ‌a local white farmer’s daughter was found dead, suspicion was quickly directed toward Harrison and James, brothers who lived a quarter of a mile away. The children were arrested and detained in the Salisbury Jail.

During this era, Black people who happened to be in the vicinity of a reported crime against a white person were vulnerable to race-based suspicion.‌ African Americans faced hostility and a presumption of guilt, especially if the alleged violence was against a white woman. ‌

After several members of a white family were killed in Rowan County, retaliation was directed towards several of the Black tenants who worked on their farm, including the Gillespie and Dillingham families.

When the three men were formally charged with murder, a mob stormed the jail where they were being held and abducted them. The mob then hanged them and mutilated their bodies, opening fire on them. The Charlotte News reported that “the bullet holes in the bodies are too numerous to be counted.”

Though the lynch mob included thousands of white people, only one person was held legally accountable thereafter.

In the early morning hours of February 11, 1930, a Black woman named Laura Wood was found chained and hanged from a tree on a farm in Barber Junction, North Carolina. A tenant farmer in Rowan County, Mrs. Wood was the wife of Neal Wood and mother of four adult children. While her age was reported differently by different sources, her death certificate indicates that Mrs. Wood was 59 at the time of her murder.

Mrs. Wood was lynched days after she was accused of what some sources reported was stealing two hams from a white woman and others described as quarreling with a white woman.

In the strictly maintained racial caste system of this era, white lives and white property held heightened value compared to the lives of Black people. Many hundreds of African Americans across the South were lynched based on false allegations, accusations of non-serious crimes, and even for non-criminal violations of social customs and racial expectations.

Racial terror lynching was not only intended to impose “popular justice” or retaliation for a specific crime. Rather, these lynchings were meant to send a broader message of domination and to instill fear within the entire African American community. Newspapers predicted that criminal prosecutions would follow the investigation into the lynching of Laura Wood, but surviving records do not indicate that anyone was arrested for her murder.

Actions in Faith & Justice began organizing in 2017 to pursue remembrance efforts to acknowledge racial terror lynchings in Rowan County. In 2017, they worked with community partners to organize a memorial event to recognize the anniversary of the 1906 lynchings. After this program, the group was inspired to continue to pursue memorialization and education that would acknowledge all of the documented victims of racial terror violence in the community as well as the unknown victims.

The group works to mobilize community-based collaborative action to eliminate disparities and to establish racial equity. Currently, the group is working to address and to dismantle the school-to-prison pipeline by supporting the establishment of a North Carolina Courts School Justice Partnership to keep students in school and out of court.

Racial terror lynching claimed the lives of thousands of African Americans and created a legacy of injustice that can still be felt today.

After slavery ended, many white people remained committed to racial hierarchy and used lethal violence and terror against Black communities to maintain a racial, economic, and social order that oppressed and marginalized Black people. Lynching became the most public and notorious form of subordination directed at Black people and was frequently tolerated or even supported by law enforcement and elected officials.

White mobs were usually permitted to engage in brutal violence with impunity. Many Black people were pulled out of jails or given over to mobs by law enforcement officials who were legally required to protect them. Terror lynchings often included burnings and mutilation, sometimes in front of crowds numbering in the thousands.

Many of the victims of these acts of violence were not recorded and remain unknown, but over 120 lynchings have been documented in North Carolina.

Family of Nease Gillespie asks, “Will commitment to work lead community from shadow of lynching tree?”