On June 13, community members in Little Rock, Arkansas, gathered at the Haven of Rest Cemetery to dedicate a historical marker in remembrance of John Carter, a Black man who was lynched by a white mob in 1927.

The Arkansas Peace and Justice Memorial Movement partnered with EJI to install the marker. At the dedication ceremony, Little Rock families, elected officials, and community elders reflected on John Carter’s brutal lynching. Speakers discussed the importance of telling the truth about our nation’s history, even when it is uncomfortable.

“It is only as we have these real and open and honest conversations that we can make our way to healing and wholeness,” said Rev. Dr. Denise Donnell.

The marker is located near the entrance of Haven of Rest, the largest Black cemetery in the state of Arkansas. The site is blocks away from the intersection where John Carter was lynched. Some historians believe that Mr. Carter’s remains are buried at an unmarked location in the cemetery.

The coalition also hosted a soil collection ceremony. One jar of soil for Mr. Carter will be on display at the Little Rock Central High School National Historic Site. Another jar of soil will be displayed at the Legacy Museum in Montgomery. EJI also announced that it will be sponsoring a racial justice essay contest for high school students in the Little Rock School District.

The Lynching of John Carter

On May 4, 1927, a mob of armed white men captured a 22-year-old Black man named John Carter, hanged him from a telephone pole, and riddled his body with bullets in downtown Little Rock.

Afterward, in a caravan of cars, the mob dragged Mr. Carter’s corpse through the streets of Little Rock. They drove past city hall and the police station before stopping at the intersection of 9th and Broadway, then the heart of the city’s African American community. There, the mob, now numbering in the thousands, ransacked neighboring Black businesses and churches, dragging out furniture and pulling off doors to serve as fuel for a bonfire they built in the street.

In an act meant to instill fear in the African American community, the mob set Mr. Carter’s mutilated body on fire as spectators watched.

The mob had formed in response to rumors that a white woman and her daughter had been assaulted six miles west of downtown. Despite the absence of any evidence against Mr. Carter, the white mob terrorized the Black community and caused extensive damage. The next day, photos of Mr. Carter’s lynching were sold for 15 cents apiece.

Although the governor and press criticized local law enforcement for not protecting Mr. Carter from the mob, no one was ever held accountable for the lynching of Mr. Carter. Racial bigotry and inequality was enforced through violence and lynchings during this time period causing great suffering and harm.

The Arkansas Peace and Justice Memorial Movement was convened by organizers Clarice and Kwami Abdul-Bey after the couple visited EJI’s Legacy Museum and National Memorial for Peace and Justice in 2018. The coalition includes partnerships with Washitaw Foothills Youth Media Arts & Literacy Collective, Just Communities of Arkansas, Coming to the Table, and Little Rock Central High School National Historic Site. Beginning in Pulaski County, the coalition hopes to inspire community remembrance efforts throughout the state of Arkansas.

The coalition has actively worked to raise awareness about racial history. It sponsored a series of virtual film screenings with interactive audience discussions in 2020 and worked with high school students to collect oral histories from Little Rock community elders. The group has also advocated for reform in the Arkansas state legislature. 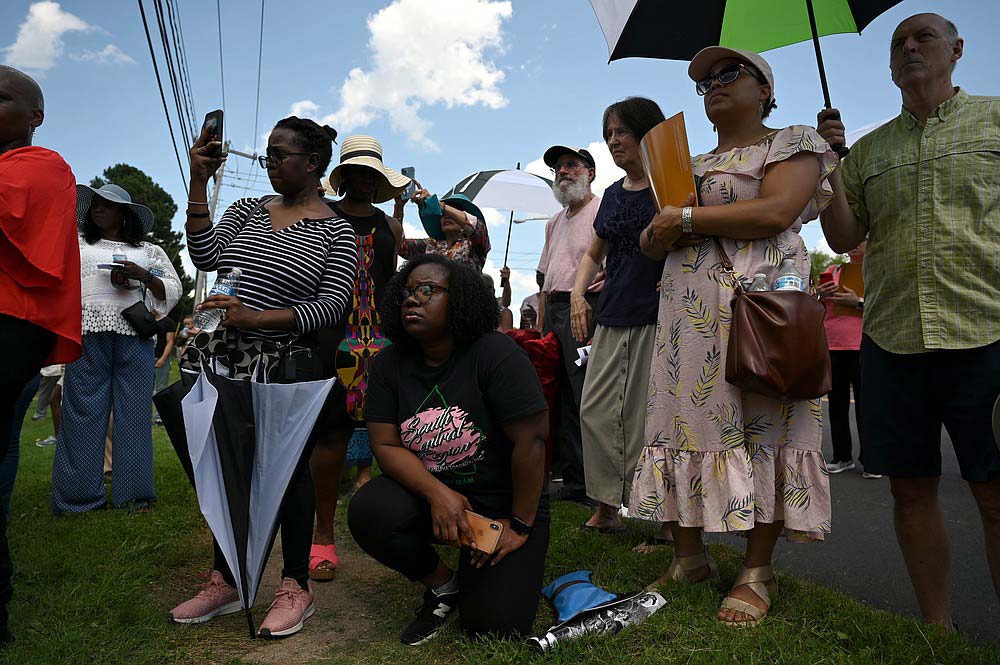 Community members listen as the inscription on the historical marker honoring John Carter is read aloud. 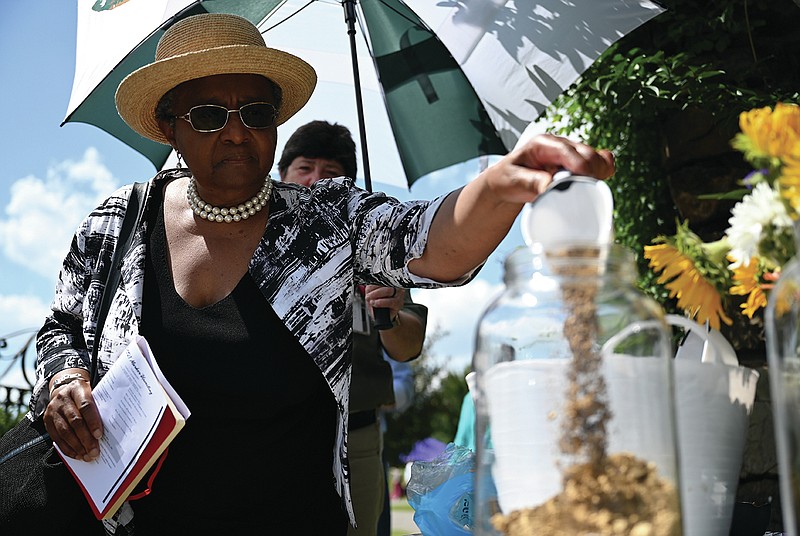 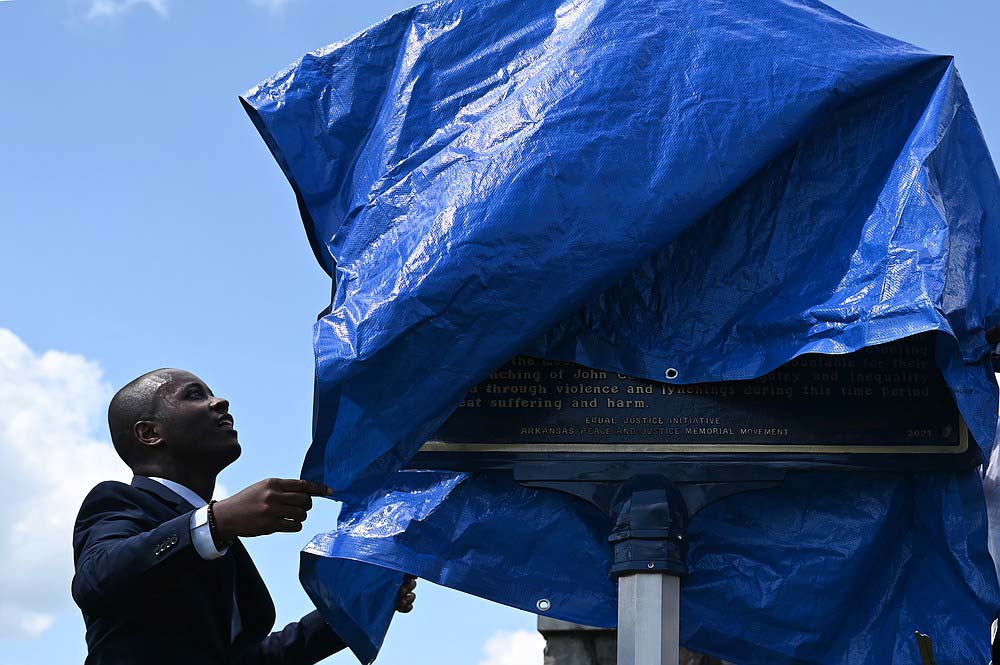 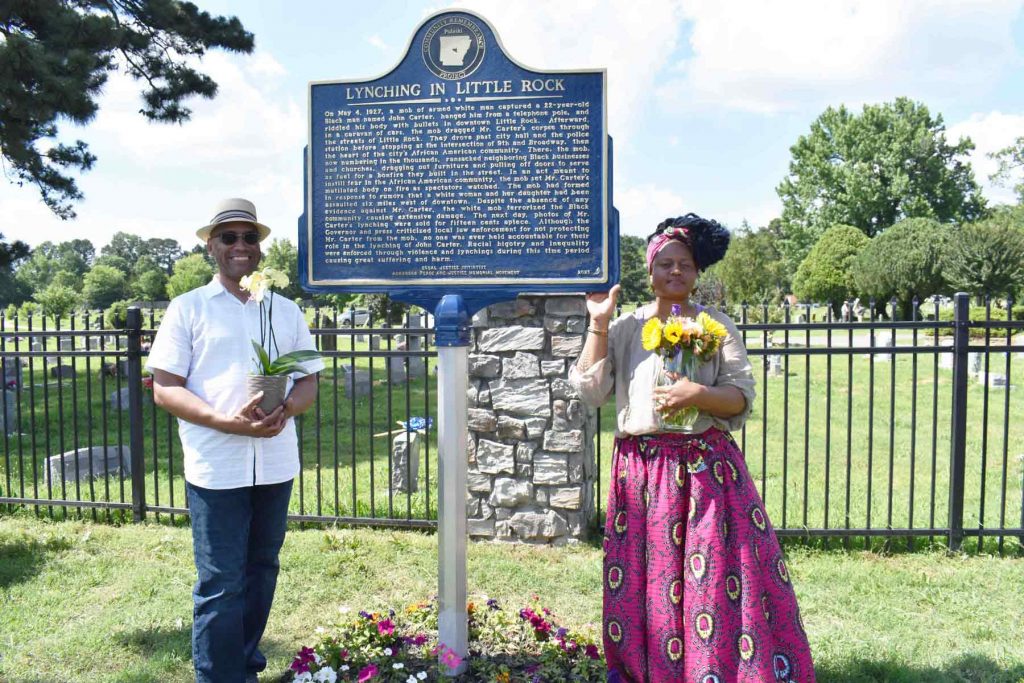 Kwami and Clarice Abdul-Bey, Co-Convenors for the Arkansas Peace and Justice Memorial Movement, stand in front of the newly dedicated marker in Little Rock, Arkansas.

Community members listen as the inscription on the historical marker honoring John Carter is read aloud.

Kwami and Clarice Abdul-Bey, Co-Convenors for the Arkansas Peace and Justice Memorial Movement, stand in front of the newly dedicated marker in Little Rock, Arkansas.