On Saturday, June 19, community members gathered with Atchison United, Atchison Art Association, and EJI in the new sculpture courtyard located in the 400 block of Commercial Street in Atchison, Kansas, to dedicate a historical marker and sculpture in remembrance of the 1870 lynching of a Black man named George Johnson.

Dr. Josh Wolf, a professor at Bendictine College, learned of the lynching of George Johnson while researching racial violence in the U.S. The sculpture, titled “Reflections,” was commissioned by Dave Breneman and unveiled alongside the marker. Mr. Breneman said the art piece was inspired by the idea of community and people working together even through challenging times.

One week earlier, the community convened as part of the local Juneteenth celebration to participate in a memorial walk and community soil collection ceremony in remembrance of George Johnson. The community walked the route from the location of the former jail from which Mr. Johnson was abducted to the bridge where the mob lynched him. They collected soil at each location in remembrance of Mr. Johnson. The soil collected as part of the ceremony will be exhibited at the Legacy Museum as well as in a local display in Atchison.

On January 4, 1870, a mob of at least 50 white men lynched a Black man named George Johnson in Atchison, Kansas.

Five days prior, Mr. Johnson had accidentally injured a white man while hunting. In fear of the retaliatory violence often inflicted on Black people by white mobs, Mr. Johnson fled the scene.

Shortly after, Mr. Johnson surrendered himself to local authorities and was held in the jail at Sixth Street and Santa Fe. The county attorney indicated that criminal charges against Mr. Johnson for the shooting were unlikely because his only alleged crime was fleeing the scene.

On January 4, it was rumored that a lynch mob was coming for Mr. Johnson that night, but law enforcement refused to take precautions in order to protect him. At 11:30 pm, the white mob entered the jail, with no resistance from the deputy on duty, and shot Mr. Johnson three times.

Even though a massive crowd of at least 2,000 witnesses was present, no one was ever indicted or held accountable for the lynching of George Johnson.

While conducting research for a book about the history of slavery and racial violence in America, Dr. Josh Wolf was encouraged to look into Atchison’s local history after receiving a question from one of his students. In his research, he learned of the 1870 racial terror lynching of George Johnson.

He shared that research with the community and eventually with EJI as well. After the 2020 murder of Ahmaud Arbery, local community activists organized a march for justice. Shortly afterwards, they learned of the murder of George Floyd and community members in Atchison began organizing to advocate for local justice reform efforts under the umbrella of Atchison United.

The group has hosted several community events and partners with organizations throughout the community, including the Atchison Art Association who helped to support the commission of a sculpture for the remembrance project. 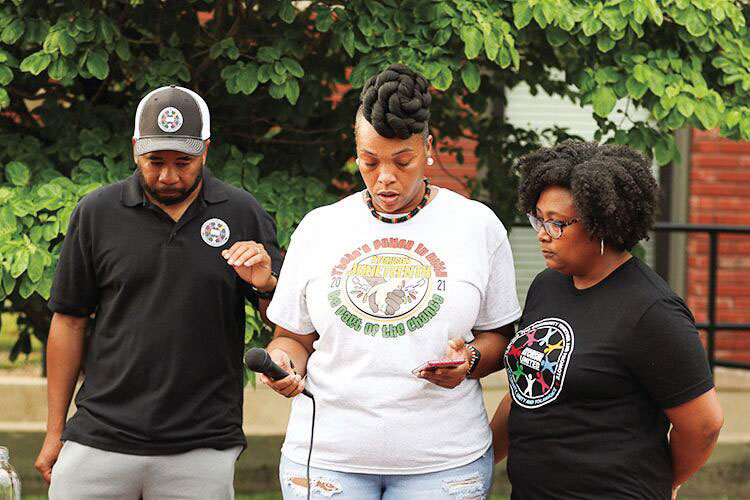 Atchison United President Sean Crittendon, Head of the Juneteenth Committee La’Queta Cluke, and Charo Kelley speak during the soil collection ceremony and remembrance event honoring George Johnson, who was lynched in Atchison in 1870. 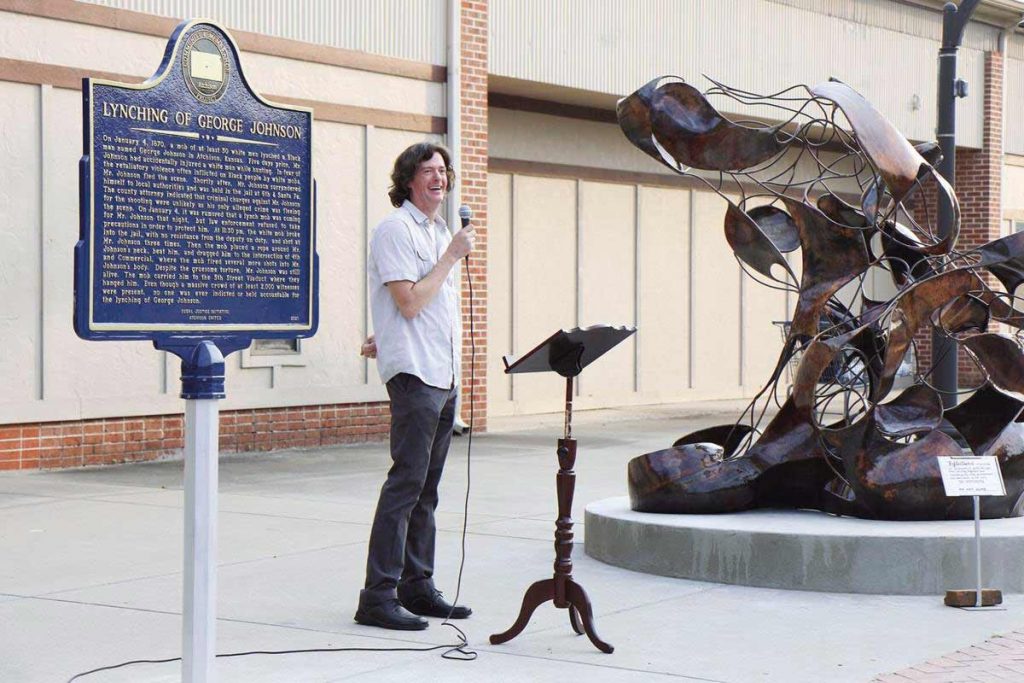 Artist David Breneman, who created the Reflections Sculpture, speaks during a dedication ceremony for the sculpture and historical marker honoring George Johnson, who was lynched in Atchison in 1870. 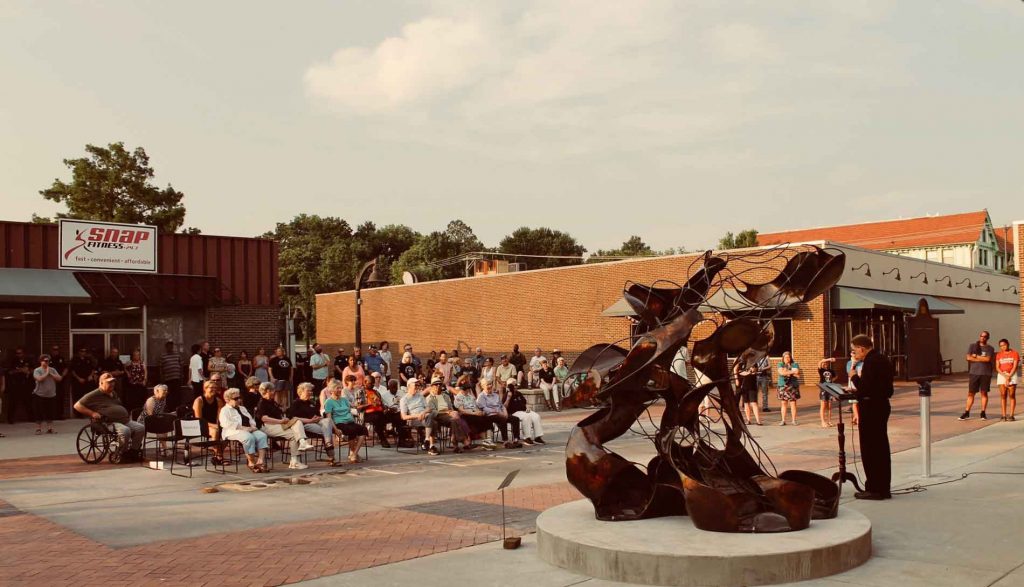 Atchison community members sit in the newly designated sculpture courtyard for the dedication ceremony on June 19, 2021. 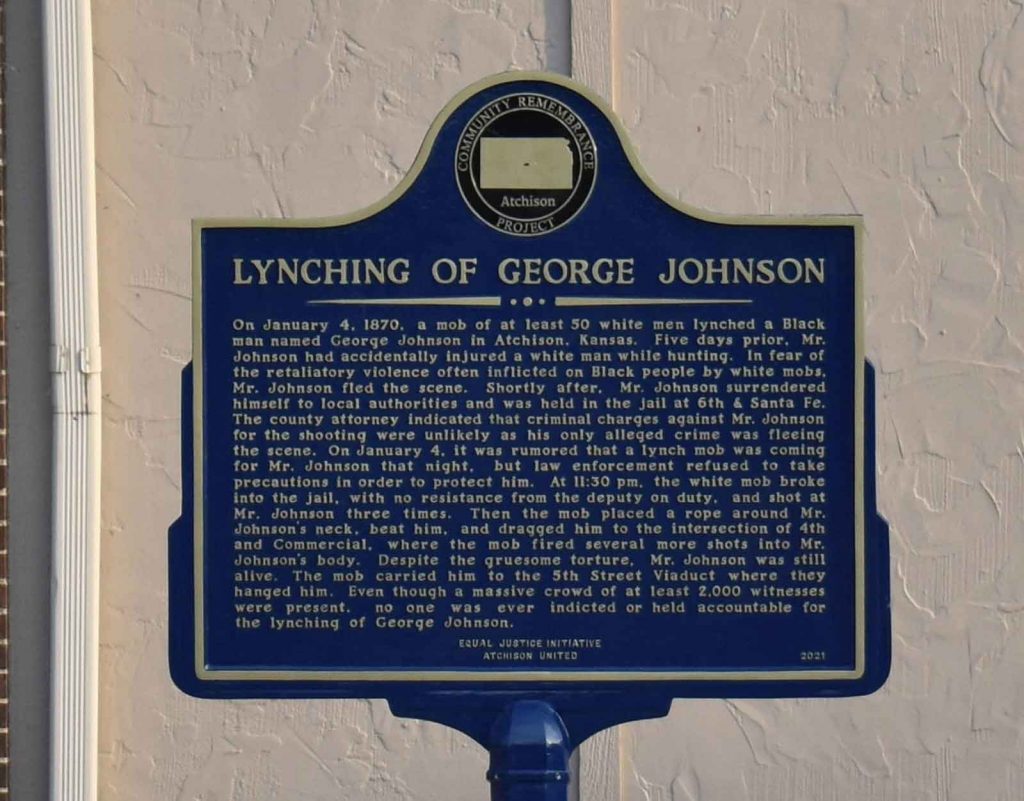 The historical marker honoring George Johnson, who was lynched in Atchison, Kansas, in 1870.

Atchison United President Sean Crittendon, Head of the Juneteenth Committee La’Queta Cluke, and Charo Kelley speak during the soil collection ceremony and remembrance event honoring George Johnson, who was lynched in Atchison in 1870.

Artist David Breneman, who created the Reflections Sculpture, speaks during a dedication ceremony for the sculpture and historical marker honoring George Johnson, who was lynched in Atchison in 1870.

Atchison community members sit in the newly designated sculpture courtyard for the dedication ceremony on June 19, 2021.

The historical marker honoring George Johnson, who was lynched in Atchison, Kansas, in 1870.

Kansas was established as a free state in 1861 following violent conflict over the legality of slavery in the new territory. After the Civil War, emancipated Black people began migrating to Kansas from Southern states in pursuit of freedom and rights as citizens. The city of Atchison grew tremendously between 1860 and 1870 with new Black residents.

Throughout Reconstruction, many white communities opposed equal rights for Black people and resorted to violent acts of intimidation and repression, including racial terror lynchings. Kansas was no exception. Racial bigotry, discrimination, segregation, and abuse was pervasive.

White mobs frequently displayed a complete disregard for the legal system by seizing Black people from police custody to carry out lynchings. Law enforcement, although armed and responsible for protecting Black people, frequently failed to intervene.

The end of Reconstruction in 1877 ushered in an era of widespread racial terror lynching, often with no legal repercussions for white mobs who acted with impunity. Between 1865 and 1950, white mobs lynched over 6,500 Black people in the U.S.

There are 22 racial terror lynchings documented in Kansas, with at least one known victim in Atchison County. Many more Black people are believed to have been lynched whose deaths may never be documented.

"Injustices in the Past": Atchison Remembers, Acknowledges 1870 Lynching