Today, 904WARD and the Jacksonville Community Remembrance Project, in partnership with EJI, unveiled a historical marker at the Evergreen Cemetery in Jacksonville, Florida. The marker memorializes Bowman Cook and John Morine, two Black World War I veterans who were lynched during the Red Summer of 1919.

About 100 people gathered in person to attend the ceremony, which was also live streamed and is available to watch on the coalition’s YouTube page. Dr. Kimberly Allen, the CEO of 904WARD, served as the mistress of ceremony. The ceremony featured remarks from community leaders, including Rev. Raymond Cook, Sarah Cooks, Taryn “Love Reigns” Wharwood, Dr. Parvez Ahmed, Retired Judge Pauline Drake, and City Councilman Reginald Gaffney.

Lee Brown, Past Region Commander, Military Order of the Purple Heart, offered remarks about the racial injustices endured by Black soldiers in World War I. Dr. David Jamison provided remarks about the erasure of the lives of Bowman Cook and John Morine from the historical record. The ceremony also featured musical performances by Mama Blue, a local performer and vocalist, and the Edward Waters University choir. The co-chairs of the community remembrance project, Melanie Patz and Lynn Sherman, provided an overview of the community’s efforts and jointly unveiled the marker.

The Lynching of Bowman Cook and John Morine

On September 8, 1919, a mob of 50 white men lynched Bowman Cook and John Morine during the Red Summer of 1919, when Black veterans returned from the war determined to overcome racism and discrimination at home and many white communities responded with violence.

In Jacksonville, several Black taxi drivers were killed by white riders. Jacksonville officials refused to investigate, placing Black drivers at greater risk. To protect themselves, Black cab drivers began refusing white passengers. When a white rider was refused service in August 1919, he indiscriminately fired a handgun into a crowd of Black people, killing one man.

In an era when accusations against Black people rarely faced scrutiny, police alleged that this man was killed on August 20 by Mr. Cook and Mr. Morine, and they were arrested.

Three weeks later, before either man could stand trial, a mob abducted them from the Duval County Jail, drove them to North Main Street and Cemetery Road, and fatally shot them. They left Mr. Morine’s body in a ditch, then dragged Mr. Cook’s corpse behind a car for nearly 50 blocks before dumping his mangled remains on Hogan Street near the Confederate monument in Hemming Park.

Lynchings and public mutilations were intended to enforce white supremacy, and lynch mobs would sometimes abandon the victim’s body in a prominent space. No one was ever arrested or charged for lynching Bowman Cook and John Morine.

In 2018, 904WARD hosted EJI staff in Jacksonville, where they spoke about EJI’s work to bring communities to document and recognize our country’s history of racial terror lynching.

Moved by the belief that truthfully acknowledging this history is vital to healing and reconciliation, 904WARD has brought together more than 170 historians, reporters, professors, lawyers, judges, artists, museum curators, activists, community leaders, and concerned citizens to form the Jacksonville Community Remembrance Project. The project has three main goals, to increase awareness of racism, its history, its trauma, and its impact today; promote truth, understanding, and reconciliation for the community; and activate collective ownership toward racial equity in Jacksonville. The group organized trips for Duval residents to visit EJI’s Legacy Museum and National Memorial for Peace and Justice in Montgomery.

In September 2019, the coalition hosted a community soil collection to mark the centennial anniversary of the lynchings of Bowman Cook and John Morine. They also partnered with Jacksonville’s Museum of Science and History to host a local exhibit about the history of racial terror lynching in Duval County.

In addition to today’s marker ceremony, the coalition has held community soil collections for the other documented victims of racial terror lynching. The coalition also hosted a Fall 2021 racial justice essay contest for students who attend Duval County public schools. 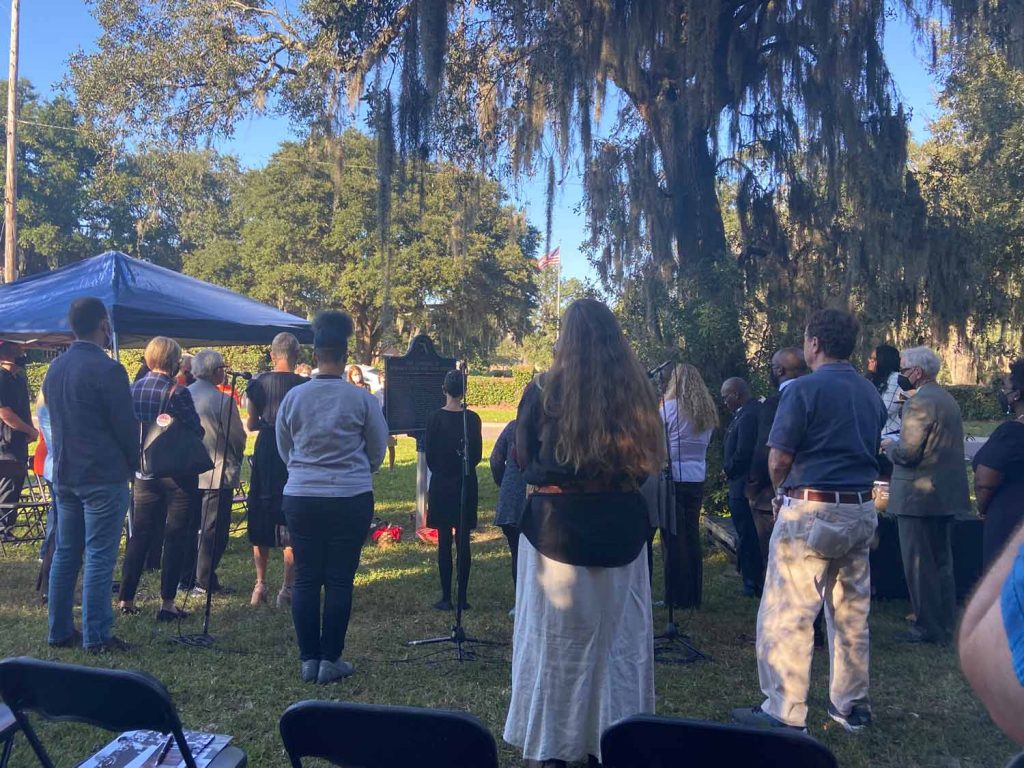 Attendees gather at the Evergreen Cemetery in Jacksonville, Florida, for the marker dedication ceremony honoring Bowman Cook and John Morine. 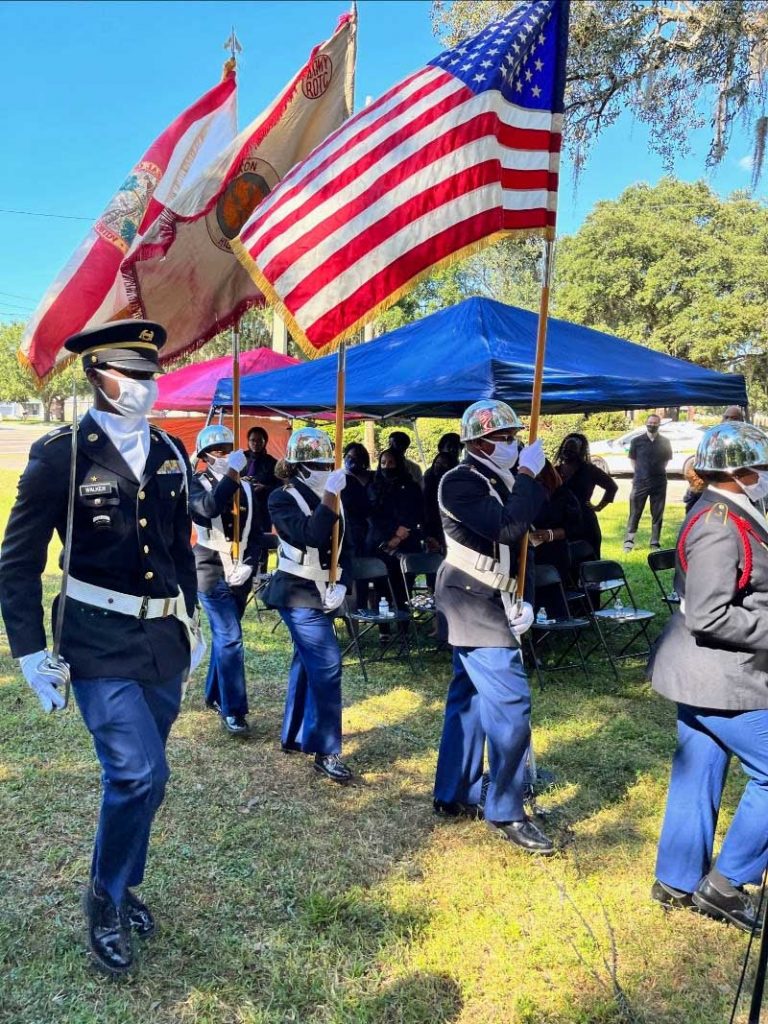 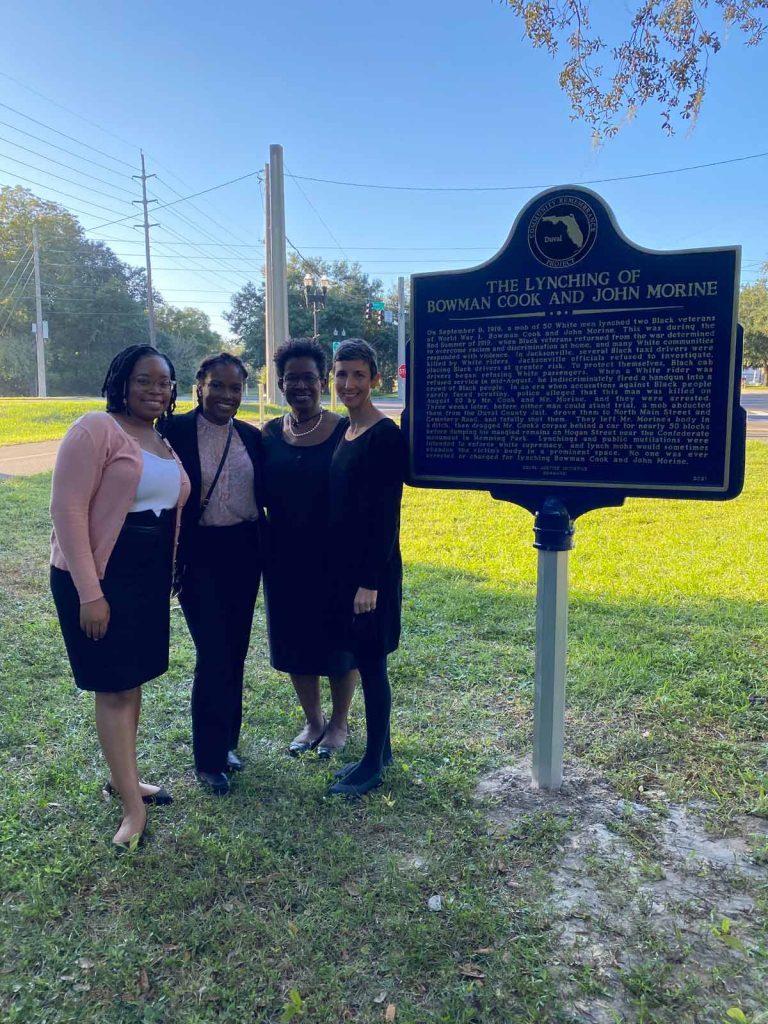 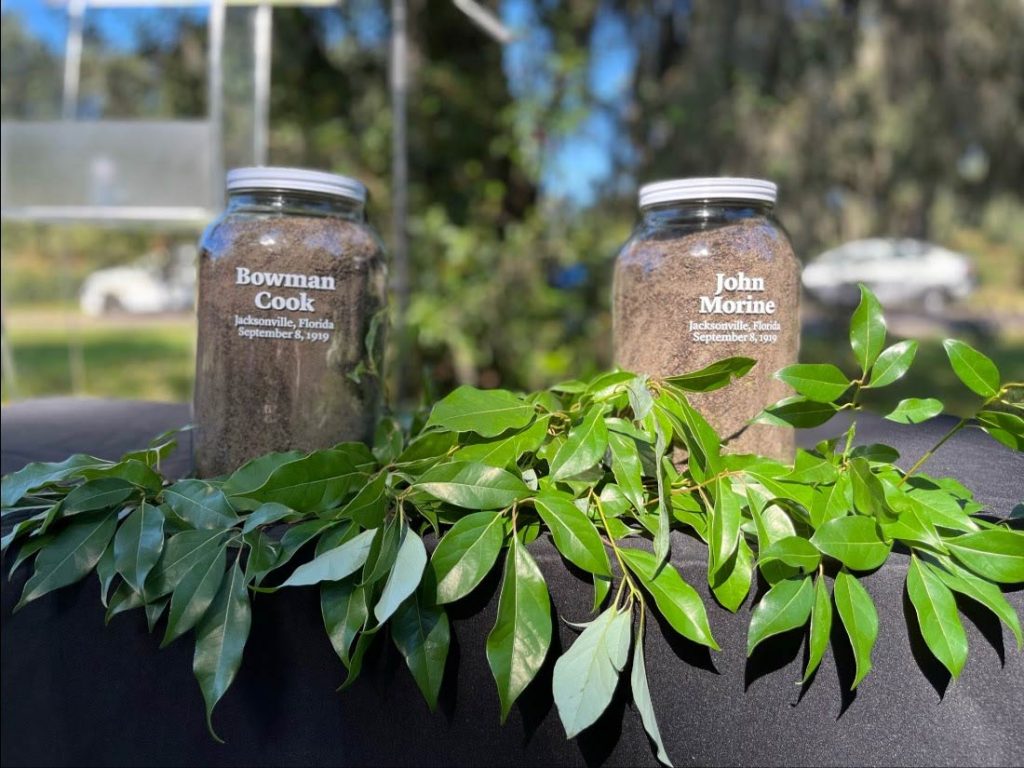 Attendees gather at the Evergreen Cemetery in Jacksonville, Florida, for the marker dedication ceremony honoring Bowman Cook and John Morine.

Based on EJI’s Lynching in America and Reconstruction in America research, EJI has documented nearly 6,500 racial terror lynchings in America between 1865 and 1950. The lynching of African Americans during this era was a form of racial terrorism used to intimidate Black people and enforce racial hierarchy and segregation.

Racial terror lynching was most prevalent in the South, but during what became known as the Red Summer of 1919, anti-Black riots erupted in more than two dozen American cities in Florida, Arkansas, Georgia, Nebraska, New York, Pennsylvania, Texas, and other states. White mobs intent on protecting their economic and social dominance from growing Black communities and an increase in Black workers destroyed property and killed or injured hundreds of Black people.

The names of many lynching victims were not recorded or remain unknown, but at least 318 documented racial terror lynchings took place in Florida between 1877 and 1950, including eight in Duval County.