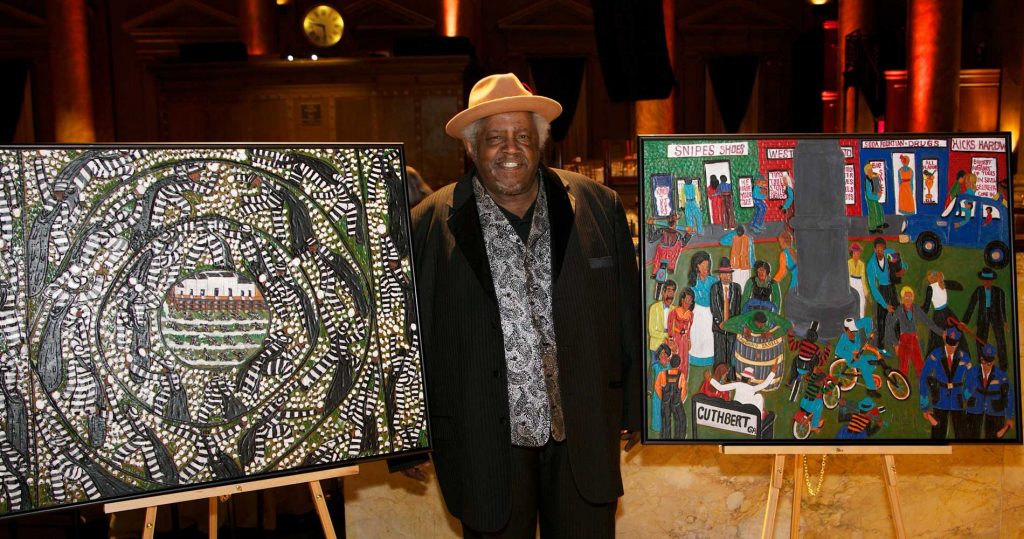 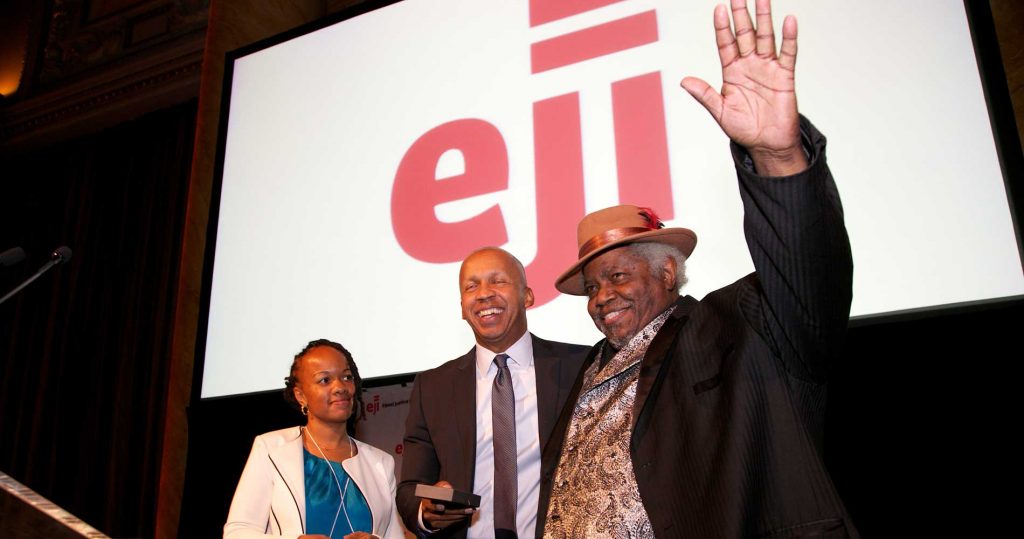 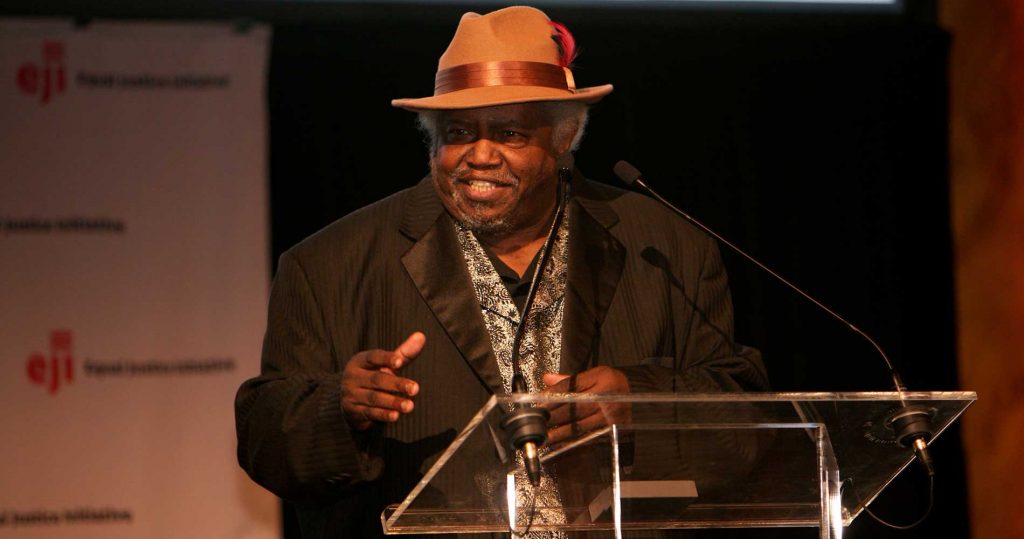 EJI honored Winfred Rembert at our annual benefit in 2015. 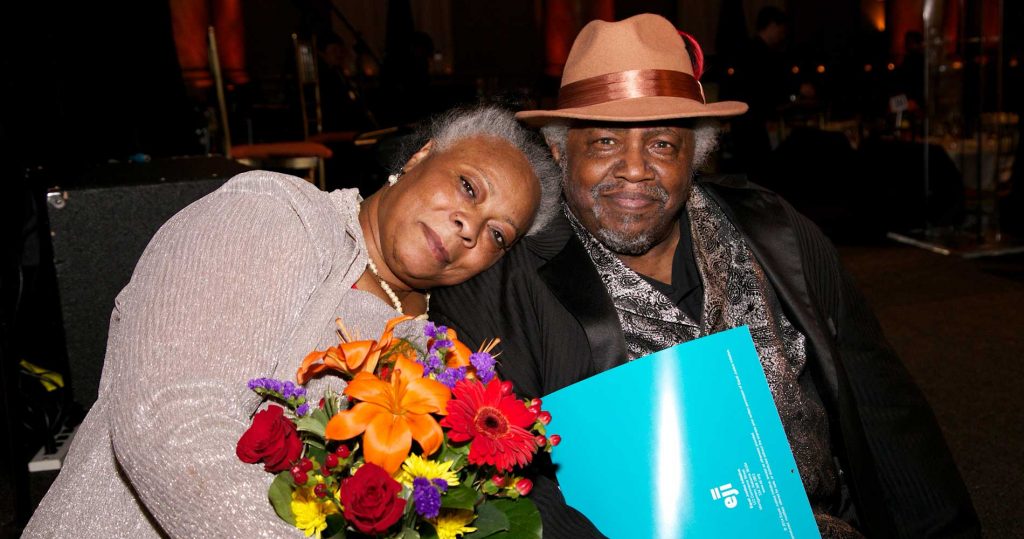 Mr. Rembert’s wife, Patsy, encouraged him to begin creating his art at age 51. 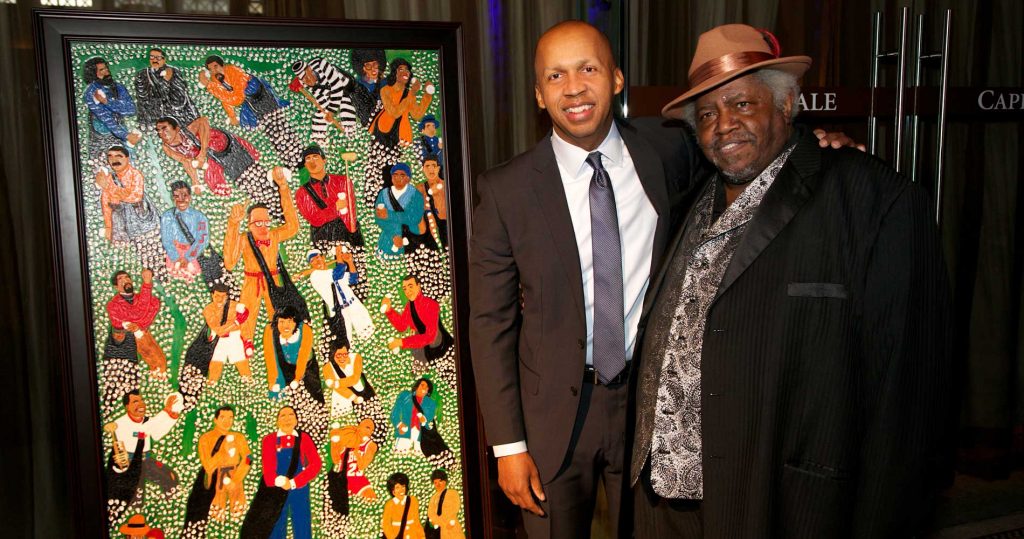 EJI honored Winfred Rembert at our annual benefit in 2015.

Mr. Rembert’s wife, Patsy, encouraged him to begin creating his art at age 51.

One of the nation’s most courageous and extraordinary artists, Winfred Rembert, died last week at age 75 at his home in New Haven, Connecticut. EJI honored Mr. Rembert in 2015 and we celebrate his life of truth-telling about American history through his brilliant and compelling art.

Mr. Rembert was born in Georgia on November 22, 1945, and grew up working in the cotton fields on a plantation in Cuthbert. As a teenager, he joined the civil rights movement, and in 1965, he went to a demonstration in Americus, a small town in southwest Georgia where local activists had been leading protests against racial segregation.

That July, leaders of the Sumter County Movement joined forces with the the Southern Christian Leadership Conference and the Student Nonviolent Coordinating Committee, led by John Lewis, to stage a voting rights march with more than 600 protestors.

Mr. Rembert, just 19 years old, was chased from the protest by two white men with shotguns. He spotted a parked car with the keys in it and drove away from the attackers, but his escape was short-lived. He was arrested and incarcerated in the local jail for more than a year, without charges being filed against him.

To protest his illegal detention, Mr. Rembert stopped up the toilet in his cell with paper, causing it to overflow. A deputy sheriff came into his cell and pulled a gun on him. “I managed to take his gun away from him,” Mr. Rembert told StoryCorps. “I locked him in the cell and I fled.”

The police caught Mr. Rembert and put him in the trunk of a police car, then drove to the countryside outside of Cuthbert. When they opened the trunk, Mr. Rembert said, “I saw all these white people and I see these ropes hanging in the tree.” The mob stripped Mr. Rembert of all his clothes, put a noose around his ankles, and drew him up in the tree. “I thought that was the end of my life.”

The deputy sheriff who he’d locked in the cell nearly castrated him with a knife. “You could probably hear me for miles screaming,” Mr. Rembert said. “I could feel the blood running down my back, down the back of my neck to the ground.”

Then another man intervened, telling the others, “Don’t do that. We got better things we can do with this n—r.” The police took Mr. Rembert back to jail, and he spent the next seven years working on prison chain gangs.

Mr. Rembert’s near lynching at the hands of law enforcement happened in 1967, but no one was ever held accountable. Instead, Mr. Rembert was shackled and paraded through the Black neighborhood in Cuthbert to terrorize the Black community.

“Now I’m 71 but I still wake up screaming and reliving things that happened to me,” Mr. Rembert told StoryCorps five decades later. He started seeing a psychiatrist to help him deal with the trauma, he said, but he doubted that he’d ever recover fully. “I think I’ll be dead and in my grave before it’s over.”

EJI has documented nearly 6,500 racial terror lynchings in America between 1865 and 1950. Near-lynchings were not uncommon, EJI director Bryan Stevenson told The New York Times. What was unusual was Mr. Rembert’s willingness to talk about his experience.

“Most people don’t ever feel secure enough to talk about this, although we’re hearing more of these stories now,” Mr. Stevenson said. “But Winfred was such a compelling storyteller, his personal narrative always included this, and he was able to talk about it in a direct way.”

And Mr. Rembert didn’t only talk about it. At 51, with the encouragement of his wife, Patsy, he began to use leather to create vividly detailed pictures of his near-lynching and his time working on the chain gang. He had learned leather-working in prison, and his vibrantly colored, painstakingly carved pieces portrayed joyful and painful scenes from his life in rural Georgia.

Mr. Rembert’s work has been exhibited at museums and galleries nationwide and was the subject of an exhibition at the Yale University Art Gallery. Among other accolades, he was awarded a United States Artists Barr Fellowship in 2016.

His memoir, “Chasing Me to My Grave: An Artist’s Memoir of the Jim Crow South,” is forthcoming this summer from Bloomsbury Publishing.

“Mr. Rembert’s art expresses the legacy of slavery, the trauma of lynching, and the anguish of racial hierarchy and white supremacy while illuminating a resolve to fight oppression and injustice,” said Mr. Stevenson, who wrote the foreword. “He has the ability to reveal truths about the human struggle that are transcendent, to evoke an understanding of human dignity that is broad and universal.”

“I Still Wake Up Screaming”: Memories From One of the Only Known Survivors of a Lynching

Ashes to Ashes: Surviving a Lynching

Chasing Me to My Grave: An Artist's Memoir of the Jim Crow South

An Artist on How He Survived the Chain Gang