The Jackson-Madison County Community Remembrance Project partnered with EJI to install a historical marker to memorialize two victims of racial terror lynching in Madison County, Tennessee, between 1877 and 1950.

The marker was installed on Friday in front of the Madison County Courthouse. The coalition worked to plan a historical marker ceremony that was originally scheduled for April 18, but the ceremony plans had to be canceled due to the Covid-19 pandemic.

In Madison County on August 18, 1886, Eliza Woods, a Black domestic worker, was accused of poisoning her white employer. That night, a mob stormed the jail, dragged Ms. Woods to the courthouse, and ripped off her clothes. Although Ms. Woods declared her innocence, she was hanged from a tree and her body riddled with bullets. Ida B. Wells, a leading anti-lynching crusader, protested the lynching of Eliza Woods many times in her writing.

Five years later, John Brown and three other African Americans were passengers on an Illinois Central Railroad train. News reports accused Mr. Brown of severely injuring the switch man. Mr. Brown was arrested and at midnight on July 26, 1891, was forcibly taken from the jail by a mob of 500 masked men armed with rifles. He was lynched in the courthouse yard. Neither Eliza Woods nor John Brown received due process for their alleged crimes; both were killed by mobs who never faced prosecution for their lynchings.

EJI documents 233 victims of racial terror lynching in Tennessee and at least three in Madsion County between 1877 and 1950: Eliza Woods (1886), John Brown (1891), and Frank Ballard (1894). In August 2017, Indivisible Jackson and the Jackson-Madison County NAACP co-sponsored the 131st Commemoration of the Lynching of Eliza Woods at the Madison County Courthouse in Jackson. Inspired to further advance narrative change efforts in Madison County, educators, faith leaders, community activists, and civic leaders conducted research into the lynchings and engaged in repair dialogue that evolved into action oriented solutions.

Dr. Cindy Boyles, a professor at the University of Tennessee at Martin, taught a course on hate crimes in which students researched local lynchings and presented their findings in 2018. She later took her students to the Legacy Museum and National Memorial for Peace and Justice. The Jackson State Community College Honors Program, along with the Jackson Madison County Branch of the NAACP and Lane College Chapter of the NAACP, also sponsored an event titled “Community Remembrance: A Memorial for the Lynching Victims of Madison County” in February 2018.

In partnership with EJI, the coalition memorialized Eliza Woods, John Brown, and Frank Ballard through a community soil collection remembrance ceremony at Jackson State Community College. Soil was collected from the lynching sites and dedicated at the ceremony as state and local leaders offered remarks. Leveraging the momentum from this event, the coalition launched opportunities for community education and awareness that deepened local understanding about their efforts. In 2019, the group formally presented to the Madison County Board of Commissioners a proposal to place a historical marker in the Madison County Courthouse yard.

Initially, several Madison County commissioners opposed the marker being placed on the courthouse lawn. After thoughtful and intentional community engagement and education about the community remembrance project over several months, the coalition approached the county commission again, and in August 2019, the commission voted 16-6 to approve the marker site location and marker language.

In addition to the marker, the coalition and EJI launched a Racial Justice Essay Contest on February 1, 2020. Three winners and one honorable mention were awarded more than $5,000 in scholarships and prizes. The winners were Timmicka Falls (first place), Cynthia James (second place), Lily Lewis (third place), and Kori Wilburn (honorable mention).

The coalition intends to continue community remembrance work and hopes to erect a second marker to Frank Ballard at a later date.

The Madison County marker is the third sponsored by EJI in Tennessee. In June 2019, EJI worked with community members in Nashville to install two historical markers documenting victims of racial terror lynching. 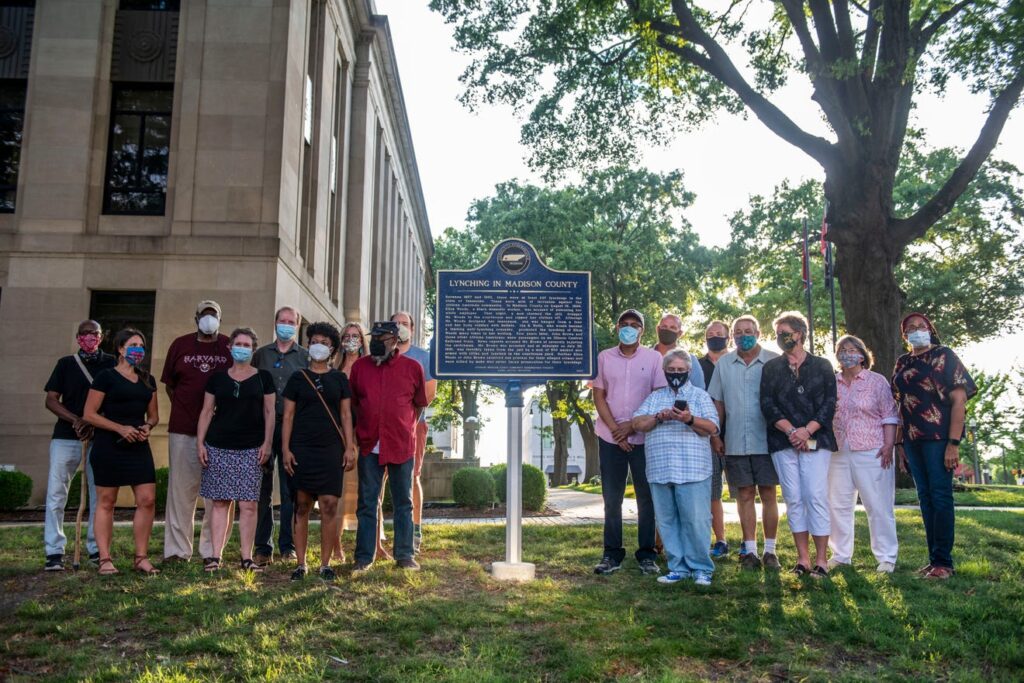 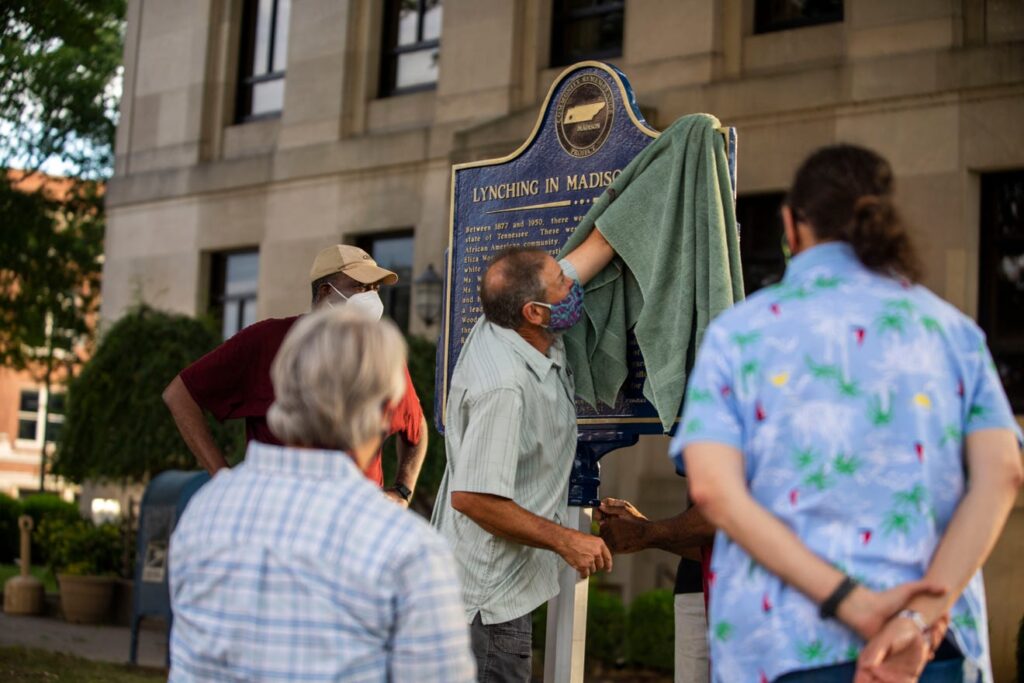 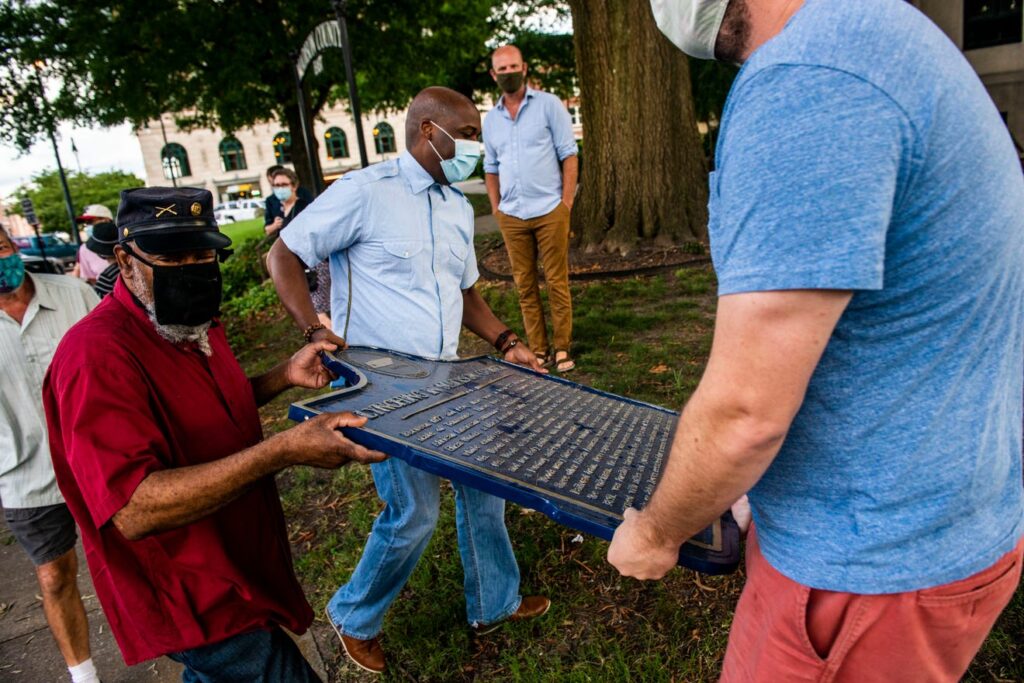