As part of EJI’s Community Remembrance Project, the Clayton Jackson McGhie Memorial and the Duluth Chapter of the NAACP, along with city officials and community members, unveiled a historical marker on October 10 in Duluth, Minnesota, at the site where three Black men—Elias Clayton, Elmer Jackson, and Isaac McGhie—were lynched on June 15, 1920.

The marker unveiling coincided with the anniversary of the Clayton Jackson McGhie Memorial (CJMM), a 54- by 70-foot curved wall with bronze sculptures that was installed in 2003 on the corner of First Street and Second Avenue East. About 100 community members gathered at the memorial in 2017 to participate in a community soil collection ceremony. As an Anishinaabe honor song was sung, local Black elders placed soil from the site into separate jars for each man, which are exhibited at the Legacy Museum in Montgomery, Alabama.

A few months later, a group of 35 Duluth residents, nicknamed the Alabama 35, traveled by bus from Duluth to Montgomery to attend the opening of the Legacy Museum and National Memorial for Peace and Justice. 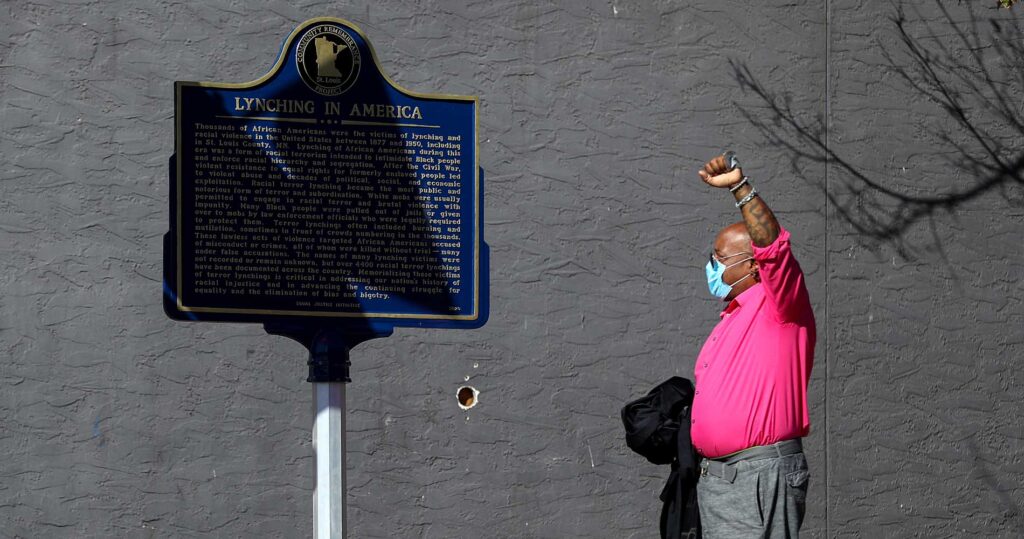 The marker dedication ceremony was part of a series of events planned to acknowledge the 100th anniversary of the lynching this summer. In response to Covid-19, the public was invited to participate in the marker dedication via livestream on the CJMM’s Facebook page, and other centennial events have been postponed to 2021.

“We have to acknowledge that dark past and how are we going to work together to make sure we are going to have a bright future for all of us,” CJMM co-chair Stephan Witherspoon said at the ceremony.

“Those who do not learn history are condemned to repeat it,” Judge Tunheim said. “Let this public marker remind us of a gross injustice that can never be forgotten or hidden or ignored. I know that I will come here to the marker to reflect and understand. I hope that all of you will as well.”

Mayor Larson apologized on behalf of the city for the racial terror lynching of Mr. Clayton, Mr. Jackson, and Mr. McGhie more than 100 years ago. “These wounds of hate, racism, oppression, hurt, slavery, marginalization, brutality and lynching aren’t going to stitch themselves,” she said.

On the night of June 15, 1920, Elias Clayton, Elmer Jackson, and Isaac McGhie, three African American men in their early 20s, were lynched by a mob of white Duluth residents.

The three men were in town working with a traveling circus when two white teenagers falsely claimed that six Black circus workers had assaulted them and raped a local white woman. Without any physical evidence of a crime, six Black men were arrested and held in the old Duluth jail, located one block away on Superior Street.

During this era of Black migration, many white workers in Duluth and other Northern cities resented the presence of Black workers.

Although less than 1% of Duluth’s population in 1920 was Black, racial tension was high. Sensational reports of the accusations circulated, inciting white residents to rage and mob vengeance. A mob of at least 5,000 broke into the jail and kidnapped Mr. Clayton, Mr. Jackson, and Mr. McGhie. The men were stripped, tortured, dragged, and hanged from a lamp post in front of 10,000 people.

Members of the mob smiled and posed with the bodies for photographs that were sold as postcards. The Minnesota National Guard arrived the next morning to secure the area and guard the surviving Black men, but no one was ever arrested or convicted for the lynchings. Mr. Clayton, Mr. Jackson, and Mr. McGhie were buried in nearby Park Hill Cemetery in unmarked graves that remained unmarked for 70 years.

In Lynching in America and Reconstruction in America, EJI has documented nearly 6,500 racial terror lynchings in the U.S. between 1865 and 1950. Thousands more Black people were killed by white mob lynchings whose names may never be discovered. The lynching of African Americans during this era was a form of racial terrorism intended to intimidate Black people and enforce racial hierarchy and segregation.

After the Civil War, violent resistance to equal rights for formerly enslaved people led to violent abuse and decades of political, social, and economic exploitation. Racial terror lynching became the most public and notorious form of terror and subordination.

White mobs were usually permitted to engage in racial terror and brutal violence with impunity. Many Black people were pulled out of jails or given over to mobs by law enforcement officials who were legally required to protect them. Racial terror lynchings often included burning and mutilation, sometimes in front of crowds numbering in the thousands. These lawless acts of violence targeted African Americans accused—often falsely—of misconduct or crimes, all of whom were killed without trial.

Lynching was most prevalent in the South, but EJI has documented racial terrorism beyond the South, including more than 300 racial terror lynchings of Black people in the Midwest and Upper South. Many of the names of lynching victims were not recorded and will never be known.

We believe that understanding the era of racial terror is critical if we are to confront its legacies in the challenges that we currently face from mass incarceration, excessive punishment, unjustified police violence, and the presumption of guilt and dangerousness that burdens people of color today.