The Druid Hills Committee of the DeKalb Remembrance Project partnered with EJI to erect a historical marker memorializing the lynching of a Black man named Porter Turner in 1945.

On May 6, a small gathering that included descendants of Mr. Turner celebrated the installation of the marker in the Druid Hills neighborhood near the intersection of Ponce de Leon Avenue and Oakdale Road. A historical marker ceremony will take place virtually on June 6.

The Lynching of Porter Turner

On the night of August 20, 1945, members of the Ku Klux Klan lynched Porter Flournoy Turner, a middle-aged Black man.

Born in Greensboro, Georgia, Mr. Turner was a wage-earning farm laborer for his family by age 14. In 1920, he moved to Atlanta’s Fourth Ward, where he worked 60 hours a week as a mechanic and porter at an auto dealership and full-service garage. 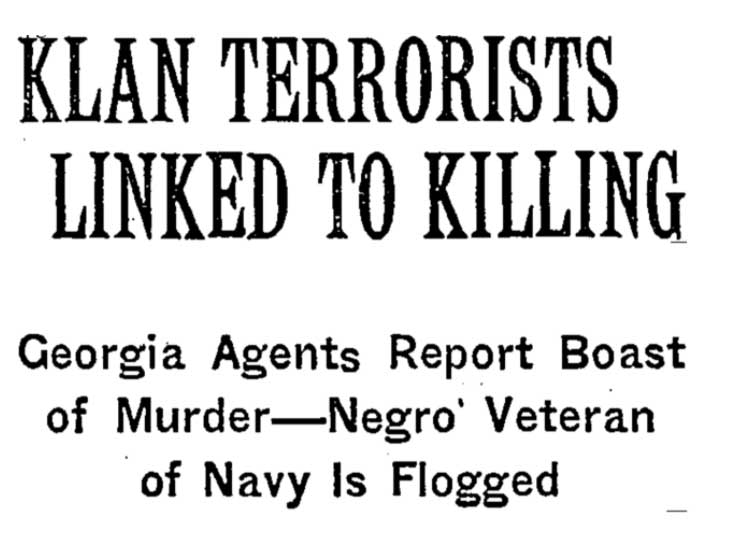 Mr. Turner was last seen on the evening of August 20, 1945, operating the white-owned taxi he drove to make additional income for his family. The next morning, his body was found on the lawn of a prominent white doctor who lived on Springdale Road in Atlanta’s Druid Hills neighborhood. The cab he had been driving was abandoned on the curb across the street. Members of the Kavalier Klub, a chapter of the Ku Klux Klan, had brutally stabbed him to death and left him to die in the street. Mr. Turner managed to crawl to the lawn before he died.

DeKalb Police conducted only a cursory investigation and recorded Mr. Turner’s lynching as an apparent robbery gone wrong. However, in June 1946, it became clear that Mr. Turner had been a victim of racial terror lynching.

Undercover informants working with Georgia’s assistant attorney general announced that members of the Klavalier Klub—an enforcer arm of the Klan tasked with terroristic raids—had boasted during a covert meeting that they had killed Mr. Turner.

Far from the small band of extremist outsiders it is now, in the 19th century and early 20th century the Klan drew members from every echelon of white society, including planters, lawyers, merchants, and ministers. During this era, the Atlanta Klan, police departments, and white taxi owners conspired to protect white economic control. Financial independence made Black people vulnerable to violent retaliation.

Despite the new evidence of who committed the murder, no one was ever arrested or held accountable for Mr. Turner’s lynching.

In 2018, the DeKalb County Branch of the NAACP (NAACP DeKalb) established a committee to erect historical markers in partnership with EJI that acknowledge all known and unknown African American victims of racial terror lynching in DeKalb County, Georgia. The DeKalb Remembrance Project emerged from these efforts, and Schaune Griffin leads the Druid Hills Committee.

Under the leadership of Dee Smith, the DeKalb Remembrance Project chairperson, and Teresa Hardy, the NAACP DeKalb President, the DeKalb Remembrance Coalition now includes over 50 community members and supporting organizations. With the support of the community, the coalition initiated a campaign called the Journey of Remembrance and Reconciliation that included programming and public education events planned from September 2019 to April 2020.

The DeKalb Remembrance Project launched a Racial Justice Essay Contest in collaboration with EJI on February 1, 2020. Students attending public high school in DeKalb County were invited to compete for prizes totaling at least $7,000.

In conjunction with the high school essay contest, the DeKalb Remembrance Project also hosted a college essay contest for students who both attend college and live in DeKalb County. Two college student winners were announced, and each received a cash prize from the coalition. 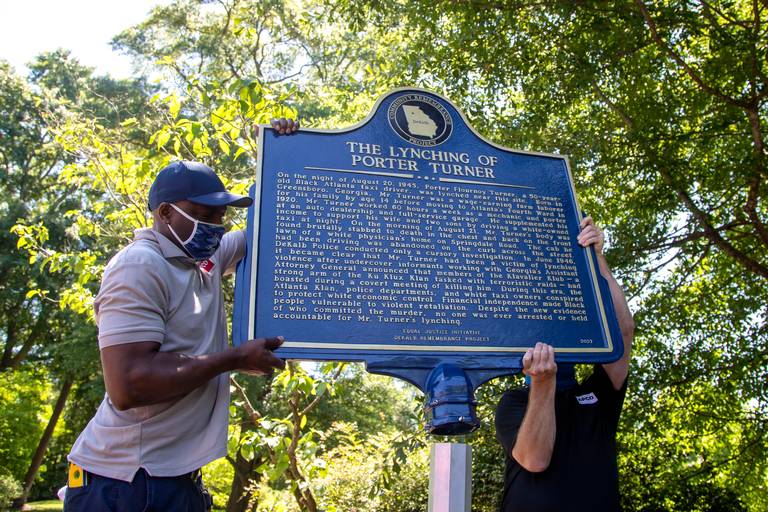 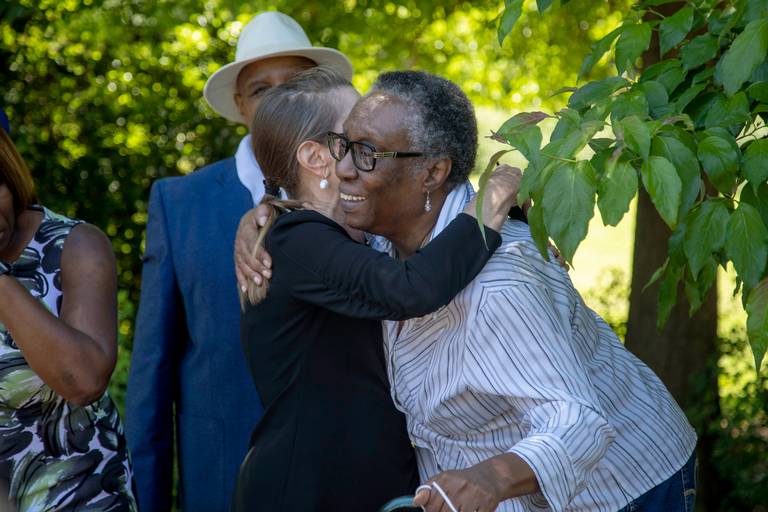 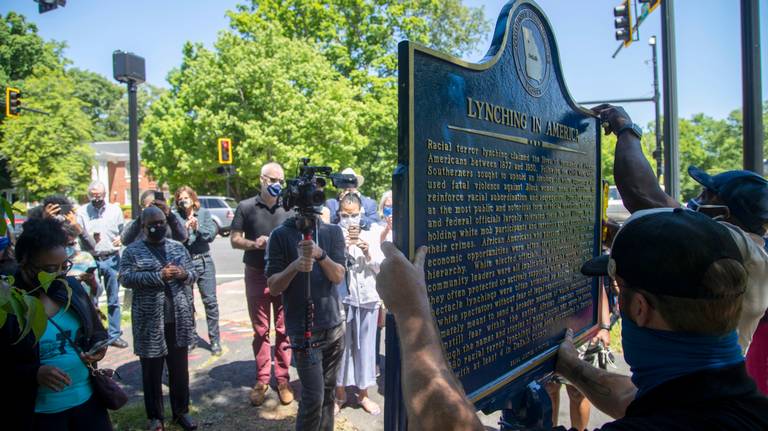 Residents gather to watch the marker installation on May 6. 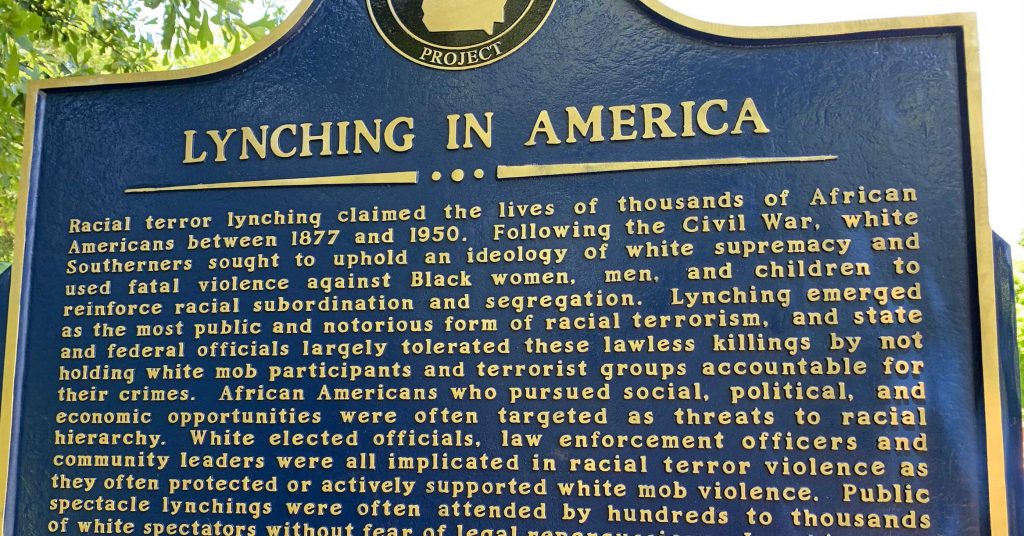 Residents gather to watch the marker installation on May 6.

These projects and the other engagement efforts that community coalitions develop center the African American experience of racial injustice, empower African American community members who have directly borne this trauma, and invite the entire community to use truth to give voice to those experiences and expose their legacies.

EJI is very proud of the Community Remembrance Project and honored to work alongside community partners throughout the country who are taking on the challenging, necessary work of telling the truth about our history and building a future rooted in justice.

‘It means so much’: Marker Honoring DeKalb Lynching Victim Installed