Community members dedicated a historical marker at Good Hope Missionary Baptist Church in Hickory, Mississippi, on August 1. Hickory is situated in the Freedman Settlement of Good Hope, a community founded in 1867 by formerly enslaved Black families.

The church was founded in 1908, the same year William Fielder, Dee Dawkins, and Frank Johnson were lynched. The three men briefly attended the church as congregants. Many of the ceremony attendees are descendants of the lynching victims and they traveled from across the country for the dedication.

Dr. Darrell Fielder, great-great-grandson of William Fielder and a historian based in Pelham, Alabama, spoke during the ceremony about the lynching victims and the connections that bind the Fielder, Dawkins, and Johnson families today.

Alice Dawkins, a descendant of Dee Dawkins, reflected during the ceremony about the need to educate young people about this history. “It’s so important that we tell our children and they tell their children about the history of their family,” she said.

“There’s no better time than now to embrace the opportunity to confront the things faced by our community,” said Ms. Joyce Salter Johnson, a descendant of Frank Johnson and liaison for the Newton County Community Remembrance Project coalition. “We commit individually and collectively to memorializing this event. It’s something that we had to do. “

The Lynchings of Frank Johnson, Dee Dawkins, and William Fielder

On October 8, a Black sharecropper named Shep Jones had a disagreement about his work schedule with his white employer. The white planter assaulted Mr. Jones, leading to an altercation that ended with the white man’s death. Mr. Jones fled Newton County, aware that Black people were not believed to have a right to defend themselves against white people and that he was at risk of being lynched.

For the next two days, an angry white mob terrorized the entire Black community in a manhunt for Mr. Jones. The mob destroyed property owned by Black people, burned a Black church and meeting lodge near Gardlandville, and threatened Black families.

On October 9, the mob hanged Mr. Jones’s father-in-law, William Fielder, from a tree near his home. The next morning, unable to locate Mr. Jones but refusing to be denied a lynching, the mob lynched Dee Dawkins and Frank Johnson, two Black men who were targeted merely for being associated with Mr. Jones.

Many Black people were so traumatized by the violence that they fled Newton County. White elected officials and law enforcement failed to hold anyone accountable for the destruction of Black property or the lynchings.

The Newton County Community Remembrance Project was founded by activist and historian Joyce Salter-Johnson. She reached out to EJI after her grandchildren found the name of their ancestor, Frank Johnson, during a visit to the National Memorial for Peace and Justice in Montgomery. In August 2019, she worked with retired judge Constance Slaughter-Harvey, Dr. Darrell Fielder, Alice Dawkins, and others to organize a community soil collection ceremony during the annual Coming Home to Good Hope reunion. 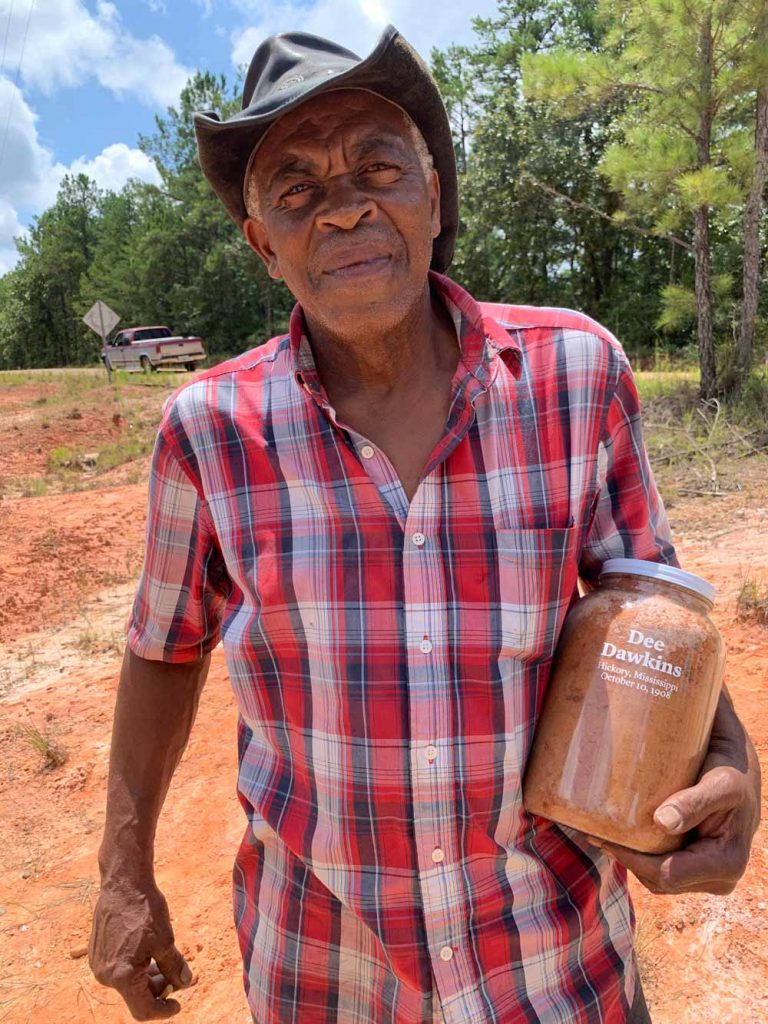 Dan Dawkins holds a jar with soil honoring his ancestor, Dee Dawkins, during a ceremony in 2019. 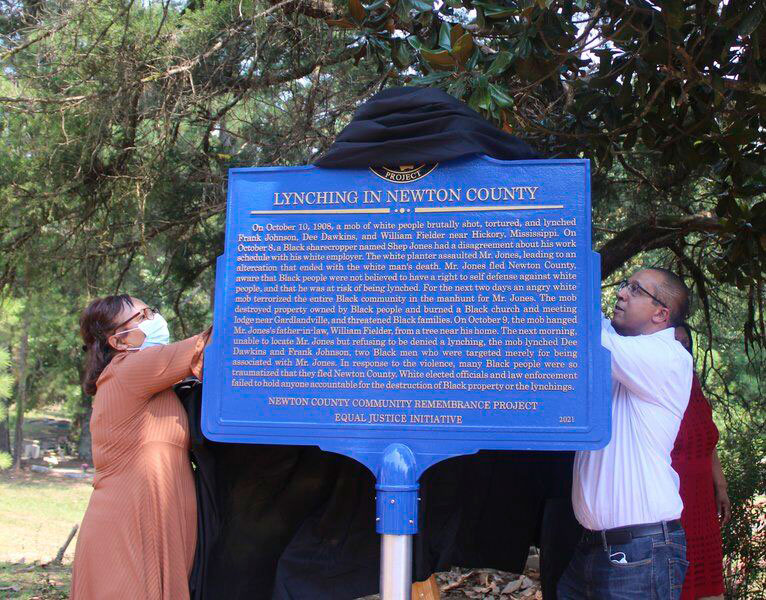 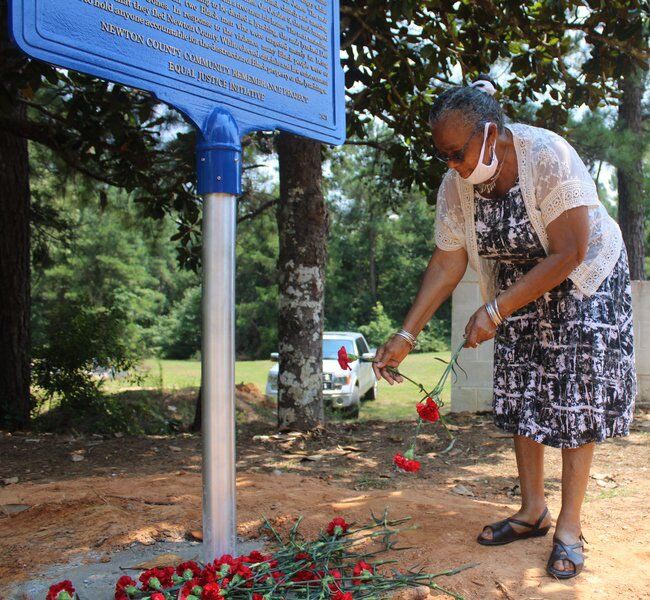 Joyce Salter Johnson, a descendant of Frank Johnson, places flowers at the base of the historical marker. 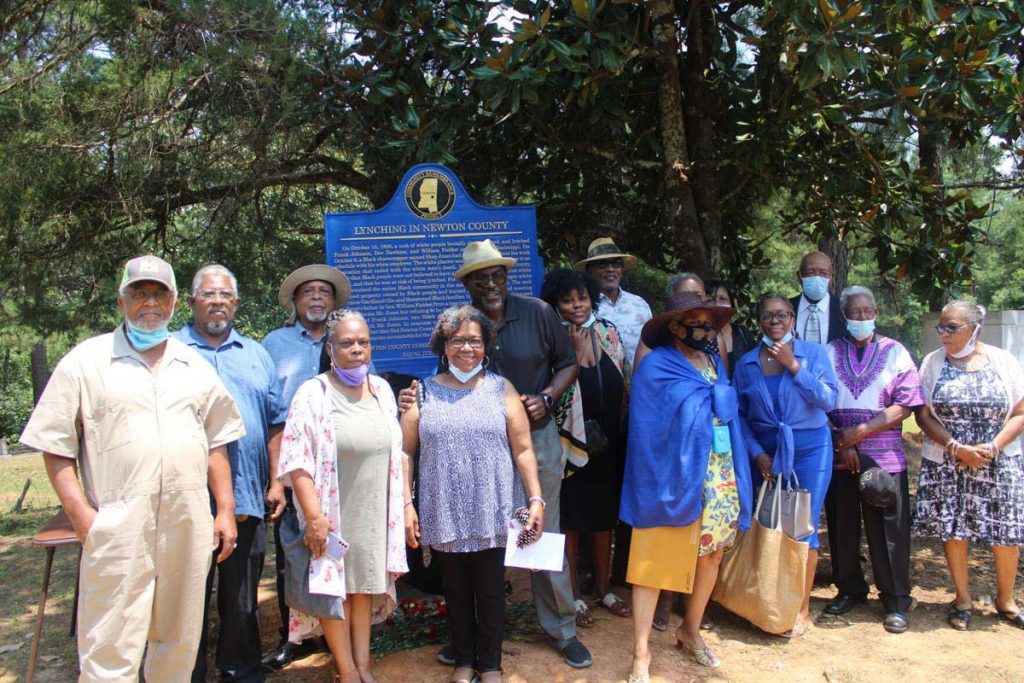 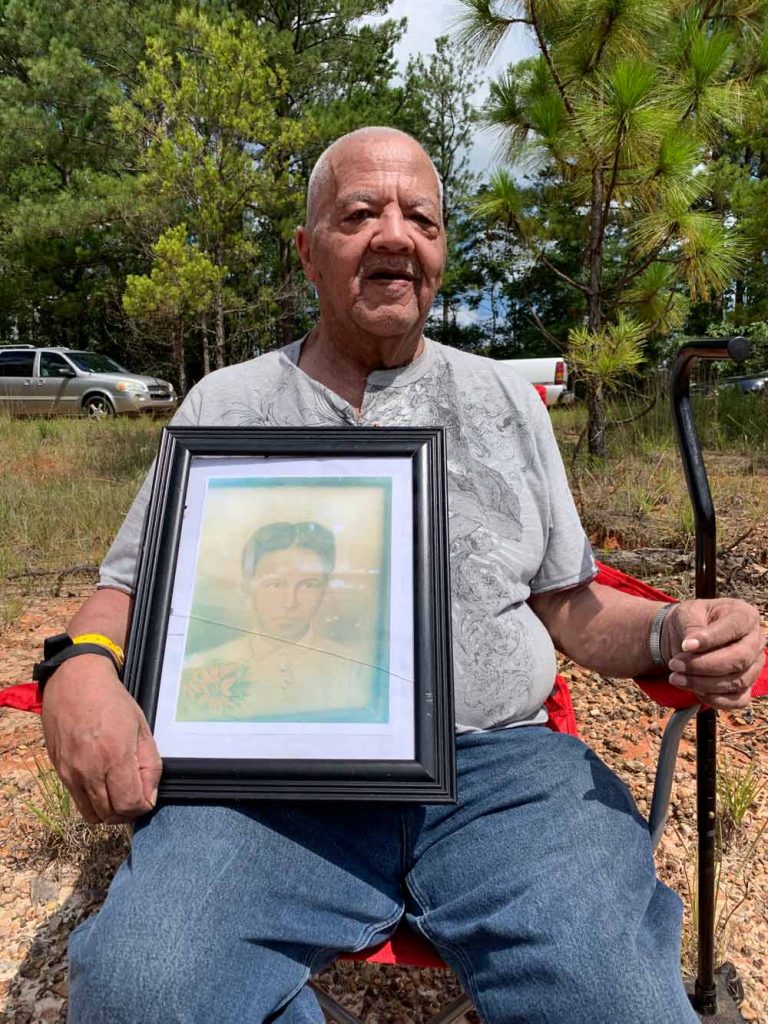 Curtis Fielder, whose grandfather William Fielder was lynched in 1908, holds a photo of his grandmother, Annabelle Fielder.

Dan Dawkins holds a jar with soil honoring his ancestor, Dee Dawkins, during a ceremony in 2019.

Joyce Salter Johnson, a descendant of Frank Johnson, places flowers at the base of the historical marker.

Curtis Fielder, whose grandfather William Fielder was lynched in 1908, holds a photo of his grandmother, Annabelle Fielder.

Before the Civil War, millions of African people were kidnapped, enslaved, and shipped across the Atlantic to the Americas under horrific conditions that frequently resulted in starvation and death.

Over two centuries, the enslavement of Black people in the U.S. created wealth, opportunity, and prosperity for millions of white people in all regions of the country while traumatizing and devastating enslaved Black people who were denied any legal rights or autonomy.

Following the Emancipation Proclamation and the Civil War, many white Americans remained committed to upholding the ideology of white supremacy. In Mississippi, chattel slavery’s legacy continued in the practice of sharecropping, an exploitative arrangement in which Black laborers farmed white-owned land for little to no pay.

Despite this hostile environment, emancipated Black people established Good Hope Missionary Baptist Church in Newton in 1908. The church stands less than half a mile from the site where its congregants, Frank Johnson, Dee Dawkins, and William Fielder, were lynched.

Black people were lynched for exercising their political rights, accusations of crimes, and perceived violations of social customs. Mob violence often included the destruction or theft of Black property. Lynching was ultimately meant to instill fear within the entire Black community and enforce racial hierarchy. White elected officials, law enforcement officers, and community leaders were often involved in racial terror lynchings or failed to hold accountable the people who were responsible for white mob violence.

Based on EJI’s Lynching in America and Reconstruction in America research, EJI has documented nearly 6,500 racial terror lynchings in America between 1865 and 1950. Millions of Black Americans were victimized by this violence, many of whom fled to the urban North and West. Although the names and stories of many victims may never be known, over 655 racial terror lynchings have been documented in Mississippi, including at least six in Newton County.

As part of our effort to help towns, cities, and states confront and recover from tragic histories of racial violence and terrorism, EJI is joining with communities to install historical markers in communities where the history of lynching is documented. The narrative historical marker in Hickory is among dozens of narrative markers sponsored by EJI to date.