The Lithonia Committee of the DeKalb Remembrance Project partnered with EJI to erect a historical marker memorializing the lynching of three Black men—Reuben Hudson in 1887 and two men in 1892 whose names are not known. The Lithonia Committee originally planned a marker unveiling ceremony for April 4, 2020, but both ceremonies were postponed due to Covid-19.

On February 23, a small gathering celebrated the unveiling of the marker across the street from Lithonia City Hall. A marker dedication ceremony will take place at a later date.

On July 27, 1887, a white mob from Lithonia lynched Reuben Hudson near the Georgia Railroad stop in Redan.

Mr. Hudson lived in Covington but worked in Redan. On July 26, a white woman in Redan reported being assaulted by a “short and heavy set, and very black” man. Short on train fare that day, Mr. Hudson walked 11 miles from Redan to Conyers to board the train closer to home. When the train arrived, he boarded the segregated coach designated for African Americans.

Because he did not have enough money to pay the full fare to his stop in Covington, Mr. Hudson hid in a closet aboard the train. Shortly after the train departed Conyers, one of the conductors found Mr. Hudson in the closet and demanded payment.

The conductor also presumed Mr. Hudson fit the woman’s description and had him arrested in Covington. On the walk to the Covington jail, Mr. Hudson overheard some men talking and realized for the first time that he was being accused of assaulting a white woman in Redan.

The next morning, as police officers escorted Mr. Hudson back to Redan by train, an angry mob of white men boarded at Lithonia, intent on lynching him. According to press accounts, the officers held him while the mob prepared for Mr. Hudson’s lynching. Despite their legal duty to protect him, officers allowed the mob to seize Mr. Hudson, removed his handcuffs to make it easier for the mob to carry out its plan, and stood by as the white mob dragged Mr. Hudson, at times on all fours, down the road and through a nearby grove. Despite his pleas of innocence, the mob tortured Mr. Hudson before hanging him from a tree.

Five years later, on April 2, 1892, a white mob from Lithonia began to chase two Black men whose names are not known after a young white girl reported an assault. When the mob reached a nearby swamp, they reported seeing a Black man run from the swamp through an open field and began to chase him. News of the alleged assault and the chase quickly spread throughout Lithonia, creating “furious excitement” as many other men from the area joined the mob in pursuit of the alleged Black assailant(s). The Atlanta Constitution reported that the Lithonia community “never thought for an instant that the determined men would let the black brute escape,” and the search continued well into the night.

After midnight on April 3, the mob returned to the city without the Black man they chased or his alleged co-assailant. It was reported that “it was generally understood that they were lynched.” Despite a functioning legal system in DeKalb County, mob participants were not held accountable for these lynchings.

In 2018, the DeKalb County Branch of the NAACP established a committee to erect historical markers in partnership with EJI that acknowledge all known and unknown African American victims of racial terror lynching in DeKalb County, Georgia. The DeKalb Remembrance Project emerged from these efforts, and Charles Anderson, assistant to the Mayor of Lithonia, leads the Lithonia Committee. 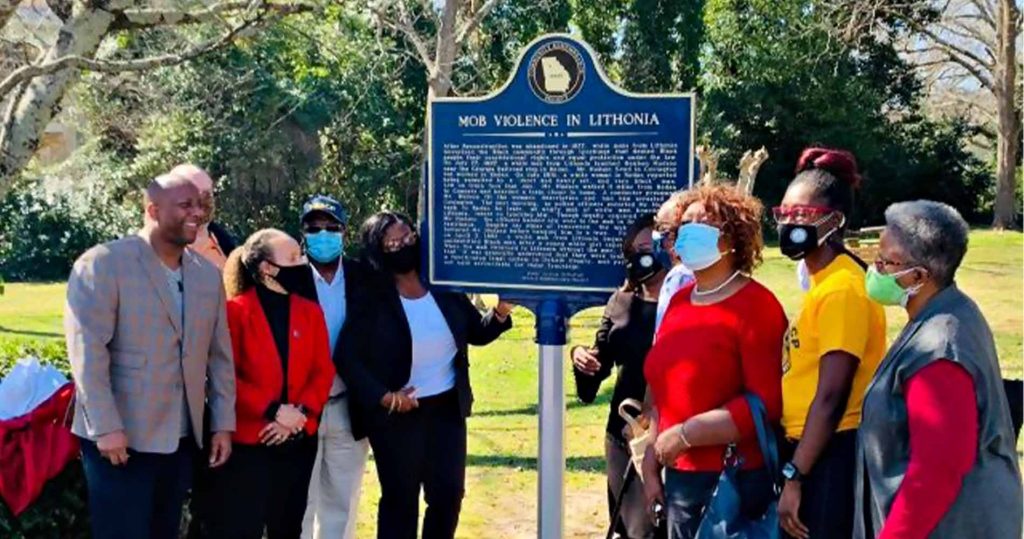 Under the leadership of Dee Smith, the DeKalb Remembrance Project chairperson, and Teresa Hardy, the NAACP DeKalb President, the DeKalb Remembrance Coalition now includes over 50 community members and supporting organizations. With the support of the community, the coalition initiated a campaign called the Journey of Remembrance and Reconciliation that included programming and public education events planned from September 2019 to April 2020.

In conjunction with the high school essay contest, the DeKalb Remembrance Project also hosted a college essay contest for students who attend college and live in DeKalb County. Two college student winners were announced, and each received a cash prize from the coalition.

These projects and the other engagement efforts that community coalitions develop, center the African American experience of racial injustice, empower African American community members who have directly borne this trauma, and invite the entire community to use truth to give voice to those experiences and expose their legacies.

EJI is very proud of the Community Remembrance Project and honored to work alongside community partners throughout the country who are taking on the challenging and necessary work of telling the truth about our history and building a future rooted in justice.