On August 28, the Allegany County Lynching Truth and Reconciliation Committee of the Maryland Lynching Memorial Project, in partnership with EJI, dedicated a historical marker in remembrance of a Black 18-year-old who was lynched in 1907.

Gathering virtually and in person, community members joined the remembrance event hosted at Emmanuel Episcopal Church in Cumberland, Maryland. The mid-19th century church’s underground tunnels were once used by enslaved Black people as a station on the Underground Railroad and the property sits directly across the street from the courthouse where the young man, whose name was reported as William Burns, was lynched.

More than a century later, local researchers reached out to the victim’s family members, who noted that his name was actually Robert Hughes. The family members traveled to Cumberland to memorialize their relative and to offer reflections. Contextualizing the song ”I Don’t Feel No Ways Tired,” Ebony Sanders, Mr. Hughes’s great-great-niece, said that “we’re never gonna be no ways tired” and that “we have to keep fighting to continue on what our ancestors fought for.”

Other speakers at the marker ceremony included ACLTRC leader Clory Jackson, the Rev. Martha Macgill of Emmanuel Episcopal Church, and Joslyn Page Allen, whose great-great-grandfather, Jesse Page, a Black man, was taken into custody alongside William Burns and, after he was cleared of any charges and released, was forced to witness the lynching of his friend.

William Burns is one of at least 40 African American people documented to have been lynched in Maryland between 1854 and 1933. As in his case, many were never convicted of any crime.

This is the fourth historical marker installed in Maryland.

On October 6, 1907, a white mob in Cumberland, Maryland, lynched an 18-year-old Black teenager known as William Burns. Days earlier, he had visited a saloon at the canal wharf after work. He was accused of disorderly conduct and asked to leave, and a local white police officer came to arrest him. Reports alleged that the officer severely beat him and, in the struggle between the two men, the officer was shot.

Mr. Burns was arrested and confined in the county jail. Rumors of the officer’s death fueled anger among white residents, and by early morning on October 6, hundreds surrounded the jail. Armed authorities failed to intervene and did not disperse the mob, which faced no resistance as it broke into the jail, abducted William Burns from his cell, and dragged him into the street. The mob then beat him to death and shot his body repeatedly.

Thousands of white spectators, including “hundreds of Sunday School children,” viewed Mr. Burns’s tortured corpse as it laid in the street for hours.

White mobs killed Black people with impunity during this era, knowing that law enforcement regularly ignored its duty and failed to prevent even the most visible public spectacle lynchings.

No member of the large mob was held accountable for the lynching. 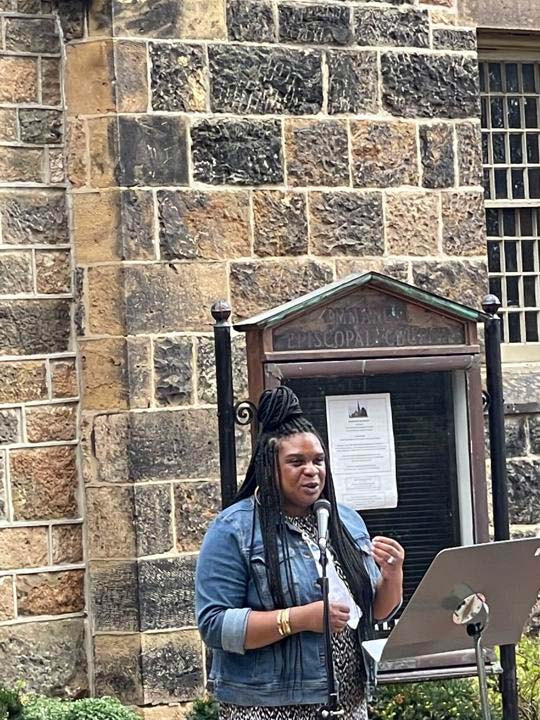 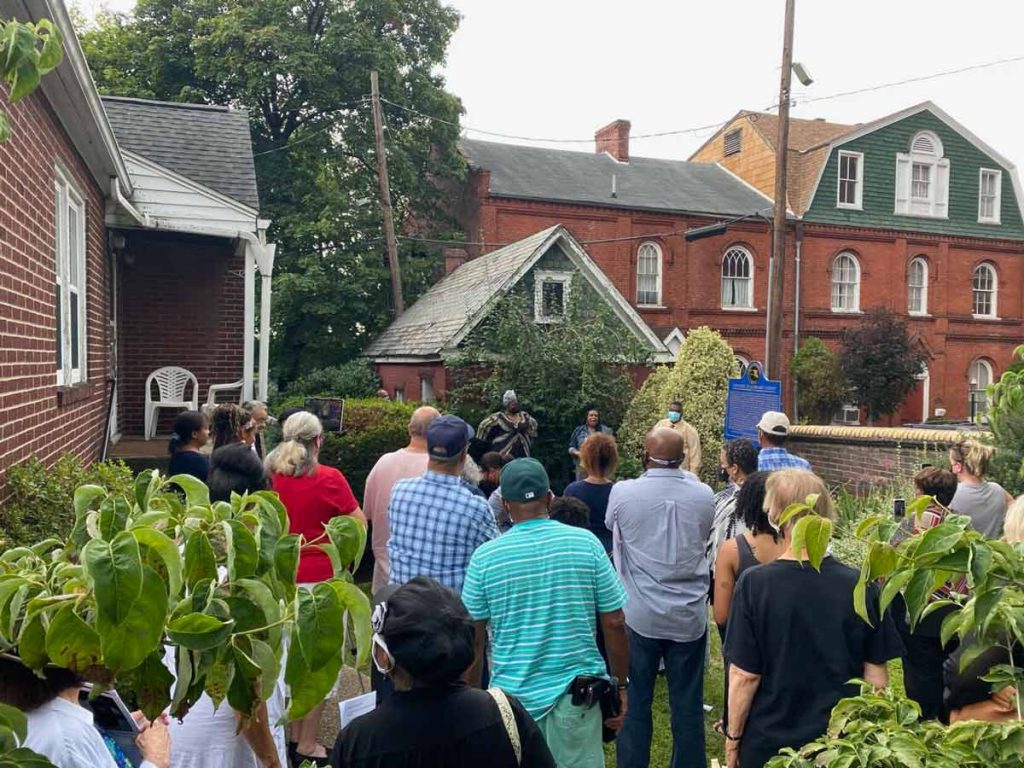 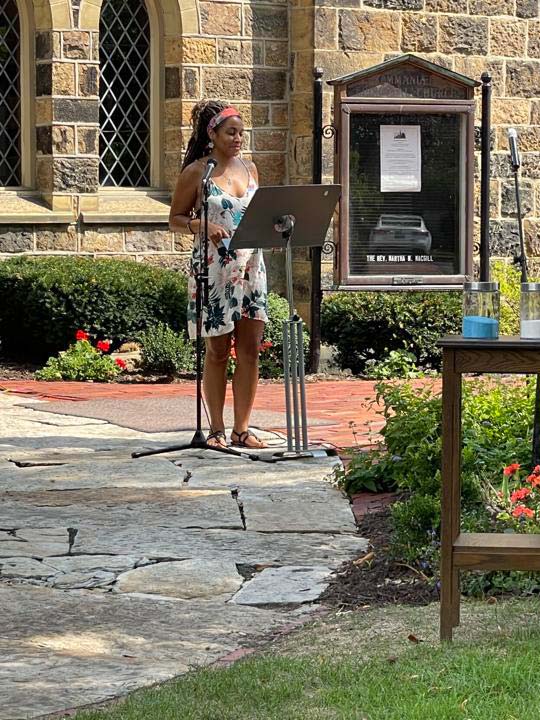 Joslyn Page Allen speaks during the marker dedication ceremony honoring William Burns (a.k.a. Robert Hughes). Ms. Allen is the great-great granddaughter of Jesse Page, a Black man who was released after being taken into custody alongside Mr. Burns, and was forced to witness the lynching of his friend.

Joslyn Page Allen speaks during the marker dedication ceremony honoring William Burns (a.k.a. Robert Hughes). Ms. Allen is the great-great granddaughter of Jesse Page, a Black man who was released after being taken into custody alongside Mr. Burns, and was forced to witness the lynching of his friend.

Racial terror lynching between 1865 and 1950 claimed the lives of thousands of African Americans and created a legacy of injustice that can still be felt today. Following the Civil War and the premature end of Reconstruction, white leaders sought to uphold an ideology of white supremacy, using intimidation and fatal violence to enforce racial subordination and segregation.

Lynching emerged as the most public and notorious form of racial terrorism as state and federal officials largely tolerated these lawless killings of Black people by not holding white mobs accountable for their crimes. Many Black people were lynched for resisting economic exploitation, violating perceived social customs, engaging in interracial relationships, or being accused of crimes, even when there was no evidence tying the accused to any offense.

White people’s allegations against Black people were rarely subject to scrutiny, often sparking lethal violence without an impartial investigation or trial. White mobs regularly seized Black people from jails, prisons, courtrooms, or from police custody without fear of legal repercussions for the lynchings that followed. In this environment of official indifference, racial terror remained systematic, far-reaching, and devastating to the Black community for generations.

Many of the victims of lynching were not recorded and remain unknown, but at least 40 racial terror lynchings have been documented in Maryland.

In 2019, the Allegany County Lynching Truth and Reconciliation Committee was established to educate and support the community of Allegany County in reckoning with its legacy of racial injustice. Through the leadership of Clory Jackson and Caroline Hann, the committee has facilitated memorialization efforts that tangibly connect people to the lynching of William Burns and other acts of racial violence inflicted on the local Black community. The Brownsville Project, a grassroots organization dedicated to actively remembering the past as a means to challenging contemporary forms of systemic oppression, is connected to ACLTRC and serves to sustain its mission.

On November 1, 2020, the committee held a community soil collection ceremony in remembrance of William Burns. Dozens of people gathered (mostly) virtually, but also in person at a socially distanced ceremony at Emmanuel Episcopal Church in Cumberland. Following the event, the coalition launched a Racial Justice Essay Contest open to students attending public high school in Allegany County, which ended in April 2021. Five student winners will be awarded scholarships totaling $6,000 at an event this fall.

ACLTRC is supported by the Maryland Lynching Memorial Project, a 501(c)(3) nonprofit organization dedicated to publicly documenting the history of racial terror lynchings across the state.

In 2019, Maryland established the first statewide commission on racial terror lynchings. The law that created the commission states that racial terror lynchings were crimes that “far exceeded any notion of ‘justice,’ just retribution, or just punishment, but were intended to terrorize African American communities and force them into silence and subservience to the ideology of white supremacy.” After three years, the commission will submit its findings and recommendations to the governor.

In October, Allegany County will be the first county in the state to hold a public hearing about the legacy of racial terror and violence in Maryland.