Calls for a Moratorium on Alabama Executions Grow

In the wake of Alabama’s failed attempt to execute Alan Miller last week, calls to suspend executions in the state are growing.

The State then filed an emergency motion asking the Supreme Court to vacate the injunction and allow the lethal injection to proceed. Shortly after 9 pm, the Court granted the State’s motion without explanation over the dissenting votes of four justices.

At 9:20 pm, officials at Holman Prison in Atmore, Alabama, said that Alabama’s Attorney General had instructed them to begin the execution. Media, family members, and attorneys expected to be transported to the death chamber to witness the execution.

But that did not happen. No witnesses or attorneys were present as prison staff tried for over two hours to establish intravenous access.

At 12:31 am, the state’s corrections commissioner, John Hamm, announced that prison staff had failed to set an IV line and the execution attempt was halted shortly before the warrant expired at midnight. 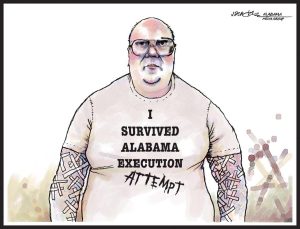 “Due to the time constraints resulting from the lateness of the court proceedings, the execution was called off once it was determined the condemned’s veins could not be accessed in accordance with our protocol before the expiration of the deadline,” Mr. Hamm said.

Mr. Hamm told reporters that Mr. Miller was still alive and in his prison cell but provided no other details. On Friday, a federal court ordered the State to allow Mr. Miller’s attorneys to document his injuries and to preserve physical evidence from the execution attempt.

As a leading death penalty scholar put it, Mr. Miller’s case exemplifies “both Alabama’s extraordinary carelessness and the Supreme Court’s cold indifference to that carelessness.”

A History of Botched Executions

Last week’s failed attempt to place an IV after trying for hours in secret is at least the third time in the last four years that Alabama has botched a lethal injection execution.

Alabama’s execution of Joe James less than two months ago has been identified as “among the worst botches in the modern history of the U.S. death penalty.” Like last week, no witnesses, attorneys, or reporters were present during the prison staff’s hours-long attempt to place an IV. When witnesses were finally allowed into the execution chamber, Mr. James’s eyes were closed and he was unresponsive.

Mr. Hamm did not provide a reason for the lengthy delay, but evidence discovered during a private autopsy revealed numerous puncture wounds where staff forced needles into his hands, wrists, and arms, bruises and lacerations showing he struggled against the straps tying him down, and jagged lacerations indicating that prison staff attempted a painful cutdown procedure to expose a vein.

The evidence showed that Mr. James suffered for over three hours—possibly the longest lethal injection execution in American history.

And that was after Alabama was forced to call off its execution of Doyle Hamm in 2018 because prison staff could not set an IV line after two and a half hours. Then-ADOC Commissioner Jeff Dunn told reporters, “I wouldn’t characterize what we had tonight as a problem,” but photographs revealed that the execution team had jabbed Mr. Hamm with needles more than 10 times in his feet, legs, and groin, likely puncturing his bladder.

Local thought leaders have demanded that “Alabama must stop conducting lethal injection executions” until it can establish its ability to carry out executions responsibly and humanely. As one columnist put it bluntly this week, “Until Alabama can get it right, stop it.”

“At minimum,” Roy S. Johnson wrote after Mr. James’s execution, “the Alabama Department of Corrections (ADOC) must allow someone other than its own officials to witness the process of inserting the IV. Currently, it does not.”

In fact, Alabama has one of the nation’s most secretive and least transparent execution policies. It not only refuses to disclose information about its execution protocols to attorneys, reporters, or the public, but it also has failed to explain to the public what went wrong during these botched executions.

The Response to Botched Executions in Other States

Other states have responded to similarly botched executions by suspending executions to determine what went wrong and how to correct it.

After Ohio had three botched executions in a four-year period, it changed its lethal injection protocol. But the state’s problems with lethal injection continued, and on January 16, 2014, Dennis McGuire struggled, made guttural noises, gasped for air, and choked for about 10 minutes before being declared dead after Ohio subjected him to an experimental, never-before-used combination of drugs. After that botched execution, Ohio Gov. John Kasich placed a moratorium on all executions.

Oklahoma paused executions for six years and launched a grand jury investigation after the botched executions of Clayton Lockett and Charles Warner in 2014 and 2015.

Arkansas has not executed anyone since April 27, 2017, when Kenneth Williams convulsed violently as he died on the gurney, the fourth person put to death in an 11-day execution spree during which at least two of the executions were botched.

Most recently, Tennessee Gov. Bill Lee announced on May 2 that all scheduled executions in that state would be paused through the end of the year to allow for a third-party investigation to address “operational failures” in the state’s lethal injection protocol that led the governor to halt the execution of Oscar Smith on April 21.

Who's to Blame for Alabama's Torture, Miserable Treatment of Prisoners?