After surviving Ohio’s attempt to execute him in 2009, Romell Broom, 64, died from the coronavirus on December 28. At least 17 people sentenced to death in four states have died of Covid-19, according to the Death Penalty Information Center, and after executions spread the coronavirus at the federal penitentiary in Terre Haute, Indiana, at least 14 of about 50 men on federal death row there have tested positive.

Nationwide, there have been more than 480,000 confirmed coronavirus infections and at least 2,100 deaths among inmates and guards in prisons, jails, and detention centers, The New York Times reported on Friday.

People who are incarcerated are at great risk of sickness and death as a result of the Covid-19 pandemic because they are unable to quarantine or practice social distancing in often overcrowded facilities where incarcerated people generally lack access to adequate medical care. A large share of incarcerated people are older or have health conditions that put them at higher risk of serious complications from coronavirus, and the pandemic has reduced the number of correctional staff, leading to more violence and abuse in jails and prisons.

The Times’s data shows that infections and deaths in the prison system have more than doubled since the start of November, and are poised to worsen as inmates are transferred from facilities forced to close due to severe staffing shortages. 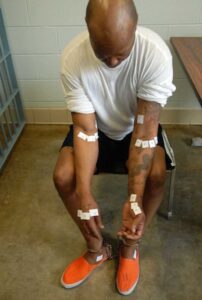 Ohio prison officials tried to put Mr. Broom to death on September 15, 2009. The execution team struggled for over two hours to find a suitable vein to administer the lethal injection drugs. They stuck him with needles in 18 different sites in his arms and legs—striking bone in one case—but were unable to find a vein despite Mr. Broom’s efforts to help them.

The team accessed a vein, but it collapsed when they tried to inject saline, bringing Mr. Broom to tears. He turned onto his back, covered his face with both hands, and sobbed.

Prison staff became frustrated, and the governor granted a one-week reprieve to give Ohio officials time to figure out how to kill Mr. Broom. It was the third time in three years that Ohio prison officials had trouble finding a vein to lethally inject a condemned person.

Mr. Broom’s case “is one of the most significant botched executions in American history,” DPIC executive director Robert Dunham told cleveland.com. “This case, more than any other, demonstrates the dangers in attempting to carry out these procedures. Lethal injection has the appearance of a medical procedure, but it is carried out by non-medical personnel.”

After Mr. Broom’s botched execution attempt, Ohio changed its lethal injection procedure, but problems with lethal injection in the state continued. On January 16, 2014, Dennis McGuire struggled, made guttural noises, gasped for air, and choked for about 10 minutes before being declared dead after Ohio subjected him to an experimental, never-before-used combination of drugs.

Mr. Broom argued that it would violate the Constitution’s Double Jeopardy Clause and constitute cruel and unusual punishment to allow Ohio to attempt a second execution. The Ohio Supreme Court ruled against him and the state rescheduled Mr. Broom’s execution for June 17, 2020.

Citing the unavailability of lethal injection drugs, Governor Mike DeWine issued a reprieve and rescheduled the execution for March 16, 2022.

Two Men Murdered in Alabama Prisons in Past Week